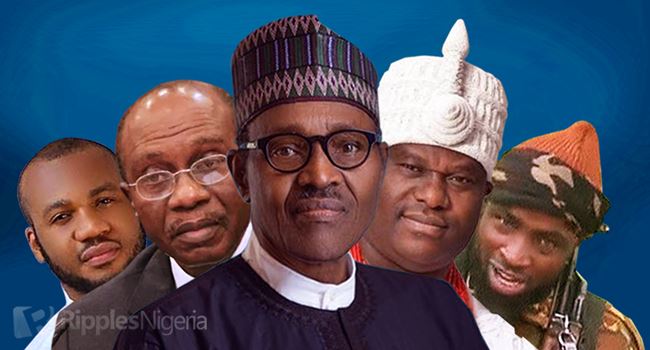 Last week was filled with attention-grabbing political events. They included the suit against 50 EndSARS supporters by a supposed activist, Kenechukwu Okeke, and the naming of Boko Haram leader, Abubakar Shekau, among the most wanted terrorists by the Nigerian Army.

These and three other political developments caught our attention. We examine, as usual, their implications for national improvement.

A supposed activist, Kenechukwu Okeke, on Monday, November 9, filed a criminal complaint against 50 persons at the Abuja Chief Magistrate Court over their alleged roles in the October #EndSARS protests in the country.

In the suit which he filed pursuant to sections 88, 109(a), 110(1)(c) of the Administration of Criminal Justice Act, 2015, Okeke said that the defendants who were the promoters of the protests must be brought to justice for the properties destroyed during the unrest.

While it is within activist Okeke’s right to sue and be sued, the development cannot be divorced from the evolving intrigues aimed at silencing or caging the country’s prominent youths perceived to have influenced millions of followers in the popular agitations.

For many critical observers, Okeke is not acting alone and may have become the proverbial Esau who is most likely not on his own but being instigated by some unknown forces.

If the Buhari-led government, as being speculated, is behind Okeke’s suit, it means Nigerians may be in for serious attempts at curtailing their freedom. Increasing harassment of people with opposing views should also be expected.

If this scenario persists, the ruling All Progressives Congress (APC) will do well to prepare for a further battering of its already dented reputation which could hurt its political capital.

On Wednesday, November 10, the Nigerian Army unveiled the fourth batch of most wanted Boko Haram terrorists containing the name of Abubakar Shekau and 85 other terrorists.

The disclosure was made by the Theatre Commander of Operations Lafiya Dole, Maj. Gen Farouk Yahaya, at Chabbal Super Camp in Maiduguri.

The listing of Shekau in the most wanted class puts a lie to earlier claims by the same military that the leader of Boko Haram had been killed.

Many have lost count of the number of times Shekau had either been eliminated or mortally wounded.

The failure of the Nigerian Army to apprehend Shekau many years after clearly indicates a failure of intelligence, and sheds more light on why the war against insurgency may have dragged on for too long.

Except the strategy to enlist Shekau is intended to lure him out, the entire exercise casts a shadow of doubt on government’s transparency, and resort to propaganda.

Media reports on Wednesday, November 11, revealed that the Central Bank of Nigeria (CBN) may have labelled EndSARS protesters as terrorists in efforts to obtain an order for the freezing of their accounts from a Federal High Court sitting in Abuja.

The apex bank reportedly approached the court after it had, earlier in the second week of October, frozen the accounts belonging to the supporters of the protest.

The government action may be nothing far from a gross abuse of power as it shows an attempt to suppress legitimate protests and demands made by peaceful protesters.

It shows a desperation by the Nigerian state to drag and deploy its various institutions in the battle against peaceful agitations for a more responsive leadership.

Indeed, the entire plot must be seen as a deliberate attempt to blackmail, intimidate and harass the leading lights of the protests into submission.

Having admitted that demands of the EndSARS protesters were genuine and legitimate, the resort to subterfuge by the Buhari administration goes to deepen the trust deficit already hurting the government badly.

President Muhammadu Buhari on Monday, November 9, charged Nigerian youths, particularly the #EndSARS campaigners, to maintain peace in the country saying, “Our own generation is on the last lap, we are exiting.

Buhari, who made the call when he received the United Nations Deputy Secretary-General, Amina Mohammed, at the Presidential Villa, Abuja, also advised the youths to keep the peace in their own interest, saying that “they want jobs, infrastructure, and development.”

Buhari’s comments keep the issues of national development on the front burner but it’s doubtful if the administration genuinely commits to building conditions that would engender peace.

It would seem from the president’s posturing that his regime had already tagged the agitations as war against the state, and not a demand for people’s rights to be respected and greater efforts made to build a nation that holds a brighter future for its citizens.

The body language of Mr President may yet explain the reason some youth leaders are currently being hounded by the government under the guise of court cases, seizure of international passports and closure of bank accounts.

What, perhaps, President Buhari and his cabinet fail to recognize is that peace begets peace. The country may well prepare for more agitations as the youth get pushed to the wall.

South-West governors and traditional rulers at a meeting on Sunday, November 8, in Lagos State, demanded the review of the constitutional conferences, including the 2014 national confab reports.

In the communiqué signed by the Ooni of Ife, Oba Enitan Ogunwusi, and the Governor of Ondo State, Rotimi Akeredolu at the end of the meeting that had the Chief of Staff to the President, Professor Ibrahim Gambari, in attendance, they also called for the implementation of some of the recommendations of the conferences, especially on security, economy and equal treatment for all citizens in the country.

The call by governors and leaders of South-West Nigeria only deepens the demands for a renegotiation or restructuring of the country.

It clearly shows, even as the Nigerian pretends, that the country sits on a keg of gun powder as long as latent national issues are glossed over.

There may yet be implosion ahead except the government is perceptive enough to read the hand writing on the wall.

That the ruling party has refused to pursue its own agenda, as promised in its manifesto, and even after its committee chairman, Gov Nasir el-Rufai, had spoken in favour of restructuring of the Nigerian polity, speaks to a great deal of insincerity.