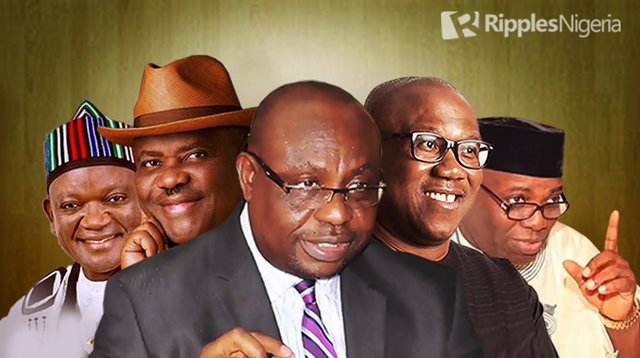 On December 19, Justice Ijeoma Ojukwu convicted the then director-general of the Labour Party presidential campaign council for receiving N204 million from the former National Security Adviser, Sambo Dasuki, in 2014.

She, however, gave the ex-presidential aide an option of a million fine on the charges.

The judge said: “The prosecution (EFCC) has established its case against the defendant and the court held that he (Okupe) is guilty as charged.
“He is hereby found guilty on 26 out of the 59-count charge and has been convicted accordingly.”

Okupe’s conviction has again confirmed the position of law in the conduct of men.
The recent conviction of individuals who should be role models for the rest of the citizens bodes well for our society where corruption has been accepted as a way of life as it will deter public officials from abusing their positions.

It will also serve as a timely reminder to corrupt public officials and other self-seeking individuals in privileged positions that the day of reckoning will definitely come and they will account for their deeds no matter how long it takes.

2.Another attack on INEC’s office

The attack was the fourth on the commission’s facilities in the last two months.

The INEC National Commissioner and Chairman, Information and Voter Education Committee, Festus Okoye, who confirmed the incident in a statement in Abuja, said the hoodlums smashed eight windows and removed burglary proofs.

The statement read: “The Resident Electoral Commissioner for Imo State, Professor Sylvia Agu, has reported that our office in Isu Local Government Area office was attacked and vandalised. The incident occurred in the early hours of Tuesday, 20th December 2022.”

The frequent attack on the INEC facilities speaks to threats posed by non-state actors to the conduct of the 2023 general elections.

With elections unlikely to take place in about 40 local government areas under the control of terrorists and other armed gangs, the growing attacks on the INEC offices suggest the collapse of the country’s security architecture.

Beyond its usual rhetoric, the time has come for the government to come up with additional measures to foil threats by criminals who are unrelenting in their determination to foist a reign of terror in the land and sabotage the election.

3. Fresh ANAP poll puts Obi ahead of Tinubu, 2 others

A fresh presidential poll commissioned by a non-governmental organization, ANAP Foundation, on December 21 placed the Labour Party candidate, Peter Obi, ahead of three other politicians eyeing the nation’s highest political office in 2023.

READ ALSO:RipplesMetrics: Nigerians to pay 24% more to cook a pot of Christmas jollof, as bag of rice now more than minimum wage

The three other candidates are Bola Ahmed Tinubu of the All Progressives Congress (APC), Atiku Abubakar of the Peoples Democratic Party (PDP), and Rabiu Kwankwaso of the New Nigeria Peoples Party (NNPP).

“Mr. Peter Obi’s 10%-point lead at this stage is significant, but not sufficient to separate him from a leading pack of candidates scoring 13%, 10%, and 2%.
“Undecided voters and those who prefer not to reveal their preferred candidate add up to a whopping 29% and 23%, respectively,” Atedo Peterside, ANAP’s founder, said in a statement.

The opinion poll’s projection, the third in Obi’s favour, speaks to the shift in Nigeria’s electoral process from being a two-horse race.

It also shows that the former governor is a serious contender for the country’s highest political officer contrary to the earlier impression that he will fizzle out when the race becomes intense.

However, as previously pointed out, success in a major national election goes beyond the random sampling technique. It is an outcome of several factors.

The current euphoria around the LP candidate suggests that the 2023 election might go down to the wire with all the major candidates almost evenly matched.

The Rivers State Governor, Nyesom Wike, said on December 22 he would announce his adopted presidential candidate for the 2023 general elections in January.

Wike, who disclosed this during the commissioning of a project in the Obio-Akpor local government area of the state, said he would also campaign for such a candidate upon announcement.

He said: “From January next year, I will campaign to my people whom they will vote for. So, all of you who have been in suspense, who have been saying all kinds of things, abusing me, wait. January is here.
“Not only will I tell my people whom to vote for, but I will also move from state to state and convince people why they should vote for the person. Nothing will happen.”

The governor’s remark suggests that all aggrieved parties in the PDP fiasco have reached a dead end in the efforts to resolve their differences.

The statement also reconfirms strong insinuations that politics is an interest-driven game, and that the governor is only using the opposition to the retention of Iyorchia Ayu as national chairman to pursue a personal agenda against the party.

The Benue State Governor, Samuel Ortom, said on December 23 the state government would no longer tolerate the killing of natives by Fulani herdsmen.

Ortom, who stated this when he presented patrol vehicles and motorbikes to operatives of the Benue State Community Volunteer Guards, added that he was still awaiting President Muhammadu Buhari’s approval for the purchase of AK-47 rifles and other weapons for the outfit.

By mobilizing the residents to defend themselves against terrorists, herdsmen, and other criminals, the governor has demonstrated his belief in community or state police as the ultimate solution to the nation’s security challenges.

It also speaks to the growing lack of trust in the ability of the Federal Government to protect the people of the state and other Nigerians across the country from armed gangs, a reinforcement of the call for total restructuring of the federation.

QuickRead: Furore over Tinubu and G-5 governors meeting. Four other stories we tracked and why they matter

Quickread: Military’s claim on pressure from politicians. Four other stories we tracked and why they matter