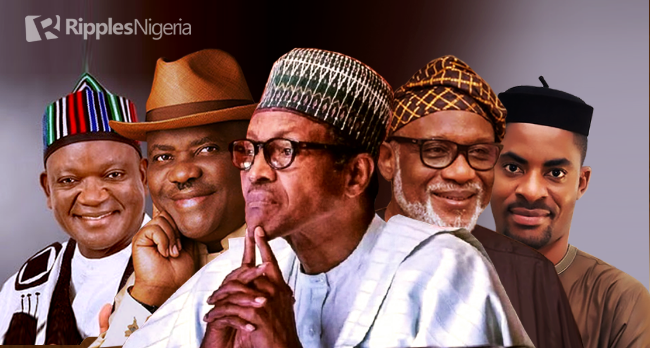 This and four other stories we tracked were among the major news highlights last week.

On August 8, the governor said at a reception organised by the President of Customary Court of Appeal, Justice Cosmas Idye, to mark his 35 years of marriage that he would seek President Buhari’s approval to procure AK-47 and AK-49 riffles for members of the newly established Benue State Community Volunteer Guards.

He said: “As long as we make laws that are not in conflict with the Constitution of the Federal Republic of Nigeria, we are right in establishing the Benue State Community Volunteer Guards.
“This week, we are going to forward a letter to President Buhari for approval to get a license for AK-47 and AK-49 for our security outfit. And we hope to get a favourable consideration from the President.”

The move speaks of the sustained sustained support and belief in the state or community policing concept, as a real solution to the country’s security challenges.

In seeking alternative security arrangement or asking citizens to procure arms to defend themselves against terrorists, herdsmen and other criminals, the governor and his team are showing their complete lack of trust in the ability of the Federal Government to fulfil its primary responsibility of securing the country and protect its citizens.

All these are hallmarks of a failed state.
The continued clamour for state police, therefore, calls for the quick resolution of the unfinished discussion on restructuring of the country which demands an honest dialogue between and among its various entities.

Such conversation will not only redefine the workings of the perceived faulty structures but also relieve the burden on the overstretched federal police in favour of a state policing system that can quickly detect and nip in the bud any emerging crime before it grows.

The governor spoke at the inauguration of the official residence for members of the Rivers State House of Assembly in Port Harcourt.

He said: “The truth has to be told at all times; today they are talking of impeaching Buhari but overriding the Electoral Act, they can’t.
“They don’t have the balls, and I told them they can’t talk.
“They think they can use Nigerians up and down, something you know you can’t do; why say it out?”

Governor Wike’s remark generally amplifies the growing perception by Nigerians that the lawmakers may just be playing to the gallery.

The sudden realization that the country’s existence is under a serious threat, after years of complaints from Nigerians, have confirmed insinuations that Iberian lawmakers might be hiding under a finger with many of them still angry with the president and his party over their defeats in the last primary elections.

Although the National Assembly’s move to impeach Buhari speaks of his failure in the last seven years, it may count for nothing at this time as the former military ruler has just nine months to complete his tenure.

A political activist, Deji Adeyanju, on August 12 predicted that the Labour Party presidential candidate, Peter Obi, would finish a distant third in the 2023 presidential election.

Read also: QuickRead: Another extension of ASUU strike. Four other stories we tracked and why they matter

Adeyanju, who made the prediction on his Twitter handle, wrote: “Willing to bet $10k with any Obedient in Nigeria or in Diaspora that Obi will finish a distant 3rd in February. Put your money where your mouth is. Let’s find someone we can deposit the money with now so you don’t change your mind later.”

Indeed, although there is a new wave of enthusiasm, especially among the youth, for a change of baton in Nigeria with the former Anambra governor at the centre of it all, the odds may still be firmly stacked against him due to a number of factors including a lack of nation-wide presence by LP and weakness of the so-called third force following the collapse of the talk on a coalition with the New Nigeria Peoples Party (NNPP).

Proposing a bet suggests a game of gamble, and Adeyanju could be risking an already shaky reputation knowing that he is a backer of the PDP presidential candidate.

While it is true that elections might not be won on social media, it would be rather too to deserve a return to power in2023.

President Muhammadu Buhari on August 12, again, appealed to the Academic Staff Union of Universities (ASUU) to end its ongoing strike.

The president made the call at the maiden Special Convocation Ceremony and conferment of Honourary Degree of Doctor of Letters on Alhaji Muhammadu Indimi, by the University of Maiduguri, Borno State.

The appeal was the president’s third in the last three months.

He said: “It’s more appropriate that we say something about this ASUU strike because we are celebrating Alhaji Indimi who is celebrated hugely for the advancement of quality education not only in this country.
“In this regard, I want to urge ASUU to call off the strike and return to the classroom.”

While the president’s latest appeal could be seen as a sign of his desire for an immediate resolution of the faceoff between the government and ASUU, in reality, there appear to be no signs of seriousness on the part of the government to bring the teachers back to the classroom.

The prolonged strike and the reluctance of both parties to shift grounds has further eroded the little goodwill enjoyed by the Buhari administration and raised doubt on the government’s commitment to the well-being of the education sector, in particular, and Nigerian students in general.

5. Akeredolu’s insistence on the southern president

The Ondo State Governor, Rotimi Akeredolu, said on August 10 that there would be no going back in the push for the Southern part of Nigeria to produce the country’s president in 2023.

The governor, who spoke at the one-year remembrance of a professor of Veterinary Medicine at the University of Ibadan, Bankole Oke, said: “A party that picked somebody from the North as its presidential candidate is not doing so in the country’s interest. The Labour Party candidate, Peter Obi, has the right to contest because he is from the South.
“We are ready to give it whatever it takes to make sure power returns to the South in 2023.”

The insistence of some politicians on the zoning of the presidency to the south in 2023 further highlights the country’s fault lines.

It shows, among others, how ethnicity and religion have become divisive factors in the sharing of power and resources among the country’s federating units.

It, therefore, highlights that is wrong with Nigeria’s leadership recruitment process where merit is sacrificed for ethnicity and other primordial considerations.

QuickRead: Wike’s threat on Secondus. Four other stories we tracked and why they matter

QuickRead: Another extension of ASUU strike. Four other stories we tracked and why they matter