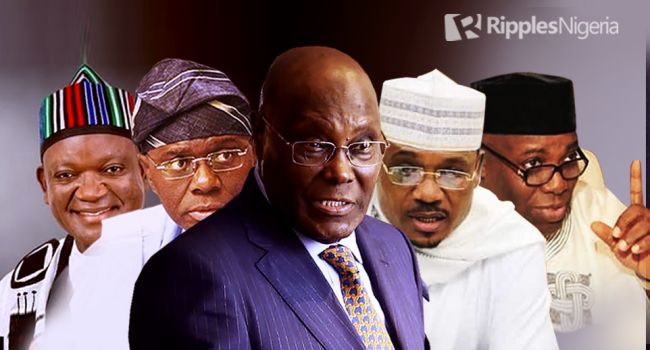 This and four other stories we tracked made news headlines last week.

The governor said in a statement issued on June 12 to commemorate Nigeria’s Democracy Day that the citizens had become slaves in their own country under President Buhari and had nothing to celebrate as the country marked another anniversary of its return to self-rule.

He said: “We cannot be celebrating Democracy Day when our citizens are now slaves and not free in their homes, schools, worship centres, workplaces and cannot go to their farms or even travel freely on our roads or by train.
“We must tackle the issue of insecurity courageously if we are to practise democracy freely.”

Although the governor’s remark highlights the failings of the current administration across the broad spectrum of the Nigerian society in the last seven years, his ceaseless attack on the federal government has fuelled insinuations that he is desperately hiding behind a finger in his bid to cover up for his awful performance in Benue.

The governor’s performance in his state hardly calls for any celebrations, thus constant verbal attacks on the Buhari administration may be basically aimed at currying favour from the voters ahead of the 2023 elections where he will be pushing for a seat in the Senate.

Okupe, who stated this when he featured in a Channels Television programme, Politics Today, also confirmed his nomination as the “standing” running mate to the party’s presidential candidate, Peter Obi.

Riding on the current wave of enthusiasm, especially among the youths for Obi, a grand coalition among the smaller parties might be just what is need to change the status quo and rewrite the country’s history in 2023.

Although the Third Force or the Granite Alliance, whatever name the arrangement is called, is basically aimed at providing a credible alternative to the All Progressives Congress (APC) and the Peoples Democratic Party (PDP), there are concerns about how far they can go with each party having different ideologies.

Read also: QuickRead: Tinubu’s success at the APC primary. Four other stories we tracked and why they matter

In the absence of an ideological appeal, the third force arrangement could be simply dead on arrival.

However, if all those involved in the arrangement are ready to rein in their egos and put aside their differences, they might just upset the odds next year.

The Supreme Court on June 17 upheld the use of hijab by female students of public schools in Lagos State.

The court gave the judgment in an appeal filed by the Lagos State government against the Court of Appeal’s ruling on the matter.
Justice Kudirat Kekere-Ekun, who delivered the lead judgment, held that the ban on hijab was discriminatory against Muslim students in Lagos State.

She said: “The ban violated the Muslim students’ rights to freedom of thought, conscience, religion, the dignity of human persons and freedom from discrimination guaranteed by the 1999 Constitution.”

The apex court’s ruling upholds the value of freedom of religion in a complex multicultural setting like Nigeria and gives women generally an equal opportunity to learn and earn a living.

It also makes a statement about the right for all women to be valued beyond appearance, a fact that companies and countries worldwide are now forced to recognize.

Rulings such as this will go a long way to douse the tension in a country already divided along ethnic and religious lines ahead of the 2023 general elections.

Abubakar, who confirmed the choice of Okowa on his Twitter handle, said: ““I am delighted to announce Governor @IAOkowa as my Vice Presidential candidate. I look forward to travelling our great country together, engaging with all Nigerians and building a shared future of peace, unity, and prosperity for all. As One We Can Get It Done. #OneNigeria. –AA.”

The choice of the Delta State governor means the South-East, regarded as the PDP cauldron since 1999, has been sidelined and risks losing out completely in the arrangement of top positions if the party wins the 2023 election.

The South-East will feel hard done after craving for the presidency for a long time only to be discarded by APC and PDP. The likely beneficiary of the South-East disenchantment is the Labour Party whose presidential candidate, Peter Obi, has become the beautiful bride of many, particularly the youths from the region.

However, it remains to be seen if Okowa’s link with the South-East, through linguistics, will be enough to pacify the Igbos and win them over next year.

A member of the House of Representatives from Iseyin/Itesiwaju/Kajola/Iwajowa Federal Constituency, Shina Peller, on June 17 dumped the All Progressive Congress (APC).

In a letter addressed to the chairman of APC in Ward 9, Iseyin Local Government Area of Oyo State, Peller said he took the decision after consultations with his people.

He wrote: “I write to formally inform you of the renouncement of my membership from the All Progressives Congress (APC).
“I took this decision after due consultation with my people from the Oke Ogun region and beyond who feel humiliated by the undemocratic acts and decisions of some gladiators within Oyo State APC.

The exit of the lawmaker from the ruling party illustrates the lack of principle among players in the country’s political space.

Peller’s decision to quit the APC shortly after failing in his bid to secure a senatorial ticket shows that politics in Nigeria is about self-service and not the general interest of the citizens.

The development reinforces the call for deliberate efforts by the authorities to make politics and by extension elective positions less attractive in a bid to check the do-or-die attitude that has become the hallmark of the system.

QuickRead: Ekweremadu’s arrest in UK. Four other stories we tracked and why they matter

QuickRead: Tinubu’s success at the APC primary. Four other stories we tracked and why they matter