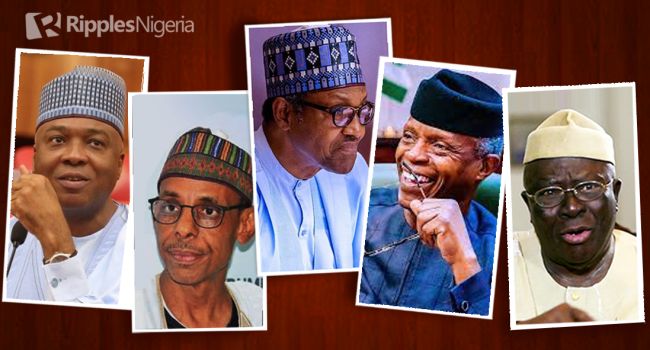 This and four other stories were among the major highlights of events in the country last week.

Osinbajo, who declared his presidential bid via a video posted on Twitter on April 11, said: “I am today, with utmost humility formally declaring my intention to run for the office of the President of the Federal Republic of Nigeria on the platform of APC.
“In this period of seven years, I have served in several capacities, representing the country in sensitive engagements. I have been to all local governments in the country, listening to the yearnings of our people. I know the hopes and aspirations of the people.”

Osinbajo’s presidential declaration shows that politics is an interest-motivated game, where friendship and long-standing links can be quickly jettisoned in the pursuit of political goals.

With Tinubu and Osinbajo supporters making incendiary remarks ahead of the All Progressives Congress (APC) presidential primary, it is feared that there could be an outbreak of violence in the days leading to the exercise.

It will also not be wrong to safely speculate that the insistence of both men to fight till the end may cause a split in the block votes for a southwestern candidate which could be leveraged by other zones.

President Muhammadu Buhari on April 14 granted a presidential pardon to the duo of former Plateau State governor, Joshua Dariye and his Taraba State counterpart, Jolly Nyame, who were convicted for financial malfeasance during their periods in office.

The Plateau State Commissioner for Information, Dan Manjang, who confirmed the development in a statement, said: “Every Plateau man is happy about it and we give kudos to the President for honouring us in this manner. We want to also thank whoever has a hand in making it happen because everybody makes mistakes and you can make errors while in governance.
“As of today, he (Dariye) has been given a reprieve as if nothing has happened and that is the spirit we have to imbibe as a people that when we make mistakes, we have to forgive because nobody is above error.”

Though it is well within the rights of Buhari to exercise, the presidential pardon granted to the former governors may rubbish the much-vaunted anti-graft crusade.

If corrupt elites continue to get a reprieve on account of their positions in society, it shows that the government is merely paying lip service to the fight against corruption in the country.

Thus, rather than dissuade, it will further embolden other public officials to continue looting the treasury and encourage other politicians aspiring for elective positions to see public offices as platforms to share the “national cake.”

In a statement issued by its Director of Publicity and Advocacy, Dr. Hakeem Baba-Ahmed, NEF asked the President to step down from his position saying, “The administration of President Muhammadu Buhari does not appear to have answers to the challenges of security to which we are exposed.
“We cannot continue to live and die under the dictates of killers, kidnappers, rapists and sundry criminal groups that have deprived us of our rights to live in peace and security.
“Our constitution has provisions for leaders to voluntarily step down if they are challenged by personal reasons or they prove incapable of leading.”

Though the Northern elders’ demand might look partisan, it shows that the group and other Nigerians have lost patience with the President over his government’s inability to secure the country.

Read also: QuickRead: Utomi’s call for govt of national unity. Four other stories we tracked and why they matter

It is unlikely, however, that the vote of no confidence will persuade the president to resign. This is essentially so because no such DNA is deeply ingrained in the country’s political culture.

The call by Northern Elders must, therefore, be seen only as a symbolic gesture to force the hands of government into stronger action given the failure of repeated assurances.

4. Adebanjo’s warning on another President from North

The leader of apex pan-Yoruba socio-political organisation, Afenifere, Ayo Adebanjo, on April 11 warned of dire consequences if another northerner succeeds President Buhari in 2023, saying such an arrangement would spell doom for Nigeria.

The Afenifere leader’s remark reinforces the call for stakeholders in the Nigerian project to sit on a roundtable and address the various problems bedeviling the country, especially the leadership recruitment process.

The continuous insistence on power shift to a particular region next year is a sign that there is a waning sense of belonging, and, therefore, re-establishes the need to build a stronger stakeholder mentality.

The former Senate President, Bukola Saraki, said on April 14 Nigeria loses $2 billion annually to fuel subsidy scam in the country.
Saraki, who stated this at a meeting with members of the Peoples Democratic Party (PDP) Board of Trustees on his 2023 presidential bid, added that the country loses $3.5billion annually to oil theft.

He said: “The economy is weak. No. The country is broke. I am not exaggerating.
“As of today, NNPC does not contribute anything to the Federation Account. At least 70 percent of our oil is being stolen. It has never been like this before. I am saying this because I know you know it is bad but it is worse than you can imagine. Because there are some of us that have an idea of how bad the situation is.
“I cannot be a President and I will be having the kind of theft that is going on in the Niger Delta, depriving hundreds of millions for Nigeria. Today we are losing $3.5b because of the oil theft happening.”

Saraki’s statement illustrates the pervasive corruption in virtually every segment of the Nigerian society, particularly in the oil sector where several billions of dollars are unremitted to the federation account.

Without a doubt, the fuel subsidy regime in the country is fraught with endemic corruption and inefficiency.

Saraki’s knock is, indeed, a sad reminder that President Buhari, as the substantive Minister of Petroleum, sits atop the rot in the petroleum sector and must be held responsible for all that has gone wrong or is still going wrong.

QuickRead: Afe Babalola’s demand for interim govt. Four other stories we tracked and why they matter

QuickRead: Utomi’s call for govt of national unity. Four other stories we tracked and why they matter