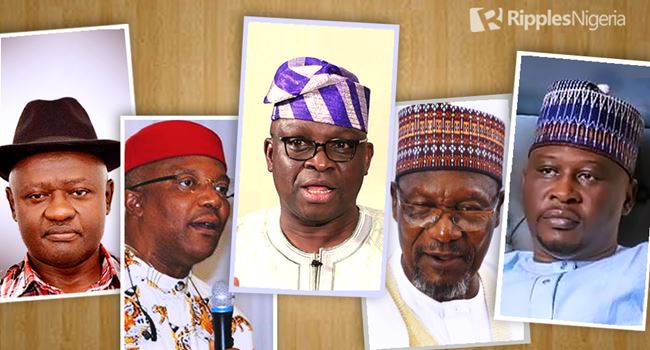 The talk on power shift has ebbed and flowed in recent weeks despite efforts by the government and concerned Nigerians to shift focus from the 2023 general elections that are more than 18 months from now.

The Pan Niger Delta Forum (PANDEF) last week stirred the hornet’s nest when the group asked Northern politicians eyeing a shot at the Presidency in 2023 to wait for another eight years.

The PANDEF National Publicity Secretary, Ken Robinson, on October 14 told Northern politicians with design on the 2023 presidential election to wait till 2031.

Robinson, who made the call in a statement in Port Harcourt, said it is unthinkable that the North would contemplate retaining the presidency beyond 2023.

He said: “Everyone has the right to take part in the governance of his/her country; to vote and be voted for. But it is equally fundamental to uphold the indispensable principles of fairness, equity, and justice. Without these, there can be no overall peace and progress.
“PANDEF avers that it should be, therefore, unthinkable that the North should contemplate clutching onto the presidential seat in 2023 at the end of President Muhammadu Buhari’s two tenures of eight years.”

PANDEF’s position is a sad reminder of the cracks in the wall of the Nigerian federation wherein perceptions of injustice continue to generate feelings of mistrust among the units.

It further confirms the flawed nature of the leadership recruitment process in Nigeria where the emphasis has always been on the primordial sentiment of ethnicity and religion rather than merit.

It also means the country is not ready yet to jettison the compromise arrangement of zoning foisted on the citizens ahead of the 1999 elections.

He was presented to President Muhammadu Buhari by the Chairman of the APC Caretaker and Extra-ordinary Convention Planning Committee, Mai Mala Buni, and the Imo State Governor, Hope Uzodinma, the same day.

The defection of the Anambra deputy governor to APC speaks to the dominant culture of politics without principle largely practiced in Nigeria.

It also reinforces the belief that politics is an interest-driven game where most participants have conditioned themselves to pursuit of selfish interest at the expense of national goals.

The former Ekiti State governor, Ayo Fayose, set tongues wagging on October 13 when he visited the National Leader of the All Progressives Congress (APC), Bola Tinubu, who returned to the country from the United Kingdom last week.

The outspoken ex-governor, who confirmed the development on his Facebook page, said: “Today, I was at Bourdillon, Ikoyi, Lagos, to wish Asiwaju Ahmed Bola Tinubu a quick recovery. Health issues know no political party and in this part of the world, we seldom celebrate people when they are alive. Rather, we like to sign condolence registers. To me, that is not the best way to live.”

Fayose’s visits, and those of other perceived enemies of Tinubu, should serve as a lesson to their supporters that the public disagreements between and among Nigerian politicians does not often permeate beyond the surface.

His action teaches that politics as a game should be played without bitterness.

Read also: QuickRead: Adeyeye’s 12m votes for Tinubu. Four other stories we tracked and why they matter

This explains why nobody will be surprised if, in the coming days or months, Fayose pitches his tent with APC despite his avowed commitment to the Peoples Democratic Party (PDP).

After all, politics is about interest and as they say “in the game of politics, there is no permanent enemy or friendship but personal interest.”

4. Senate’s U-turn on e-transmission of results

The Senate on October 12 reversed itself on electronic transmission of election results and empowered the Independent National Electoral Commission (INEC) to decide an option that best suits the situation.

The Senate Majority Leader, Yahaya Abdullahi, who presented the motion for the changes at the plenary, noted
Senate’s decision to delete outright Clause 52(3) passed in July.

The clause states: “The Commission ( INEC) may consider the electronic transmission of results provided that the National coverage is adjudged to be adequate and secure by Nigeria Communications Commission NCC.”

With the Senate approval of the e-transmission of election results, it suffices to say that the lawmakers bowed to intense pressure from Nigerians who are demanding a more credible electoral process.

Indeed, the development confirms the age-long saying that power belongs to the people.

Without a doubt, the deployment of the technology will enhance the integrity of the nation’s electoral process by helping to eliminate the some of the frauds that marred the previous elections.

5. Adoption of Ayu as PDP chairman

The Peoples Democratic Party (PDP) on October 14 adopted the former Senate President, Iyorchia Ayu, as consensus candidate for the position of national chairman ahead of the party’s national convention slated for October 31.

The Adamawa State Governor, Ahmadu Fintiri, who confirmed the development to journalists, said: “Distinguish Senator Iyorchia Ayu has emerged as a consensus candidate of the North. With this, we are fully prepared, we are ready. We will be talking with our colleagues from other parts of the country, especially the South so that they can see reasons for this consensus candidate and give us support during the October 30 and 31 convention of PDP.”

The adoption of Ayu as consensus chairman by the PDP, and claims by some interests within the party that the decision does not preclude same northern zone from putting forward a candidate, signals that his emergence could mark the beginning of another intrigue.

Although the discussion has centred on which zone from the South PDP will pick its candidate from in two years’ time, Ayu’s emergence speaks to the fact that his choice will not preclude anybody from any zone from contesting the presidency.

QuickRead: Malami on financiers of Igboho. Four other stories we tracked and why they matter

QuickRead: Adeyeye’s 12m votes for Tinubu. Four other stories we tracked and why they matter