QuickRead: Pantami gets handshake, Uzodinma tastes terror. Three other stories we tracked and why they matter | Ripples Nigeria 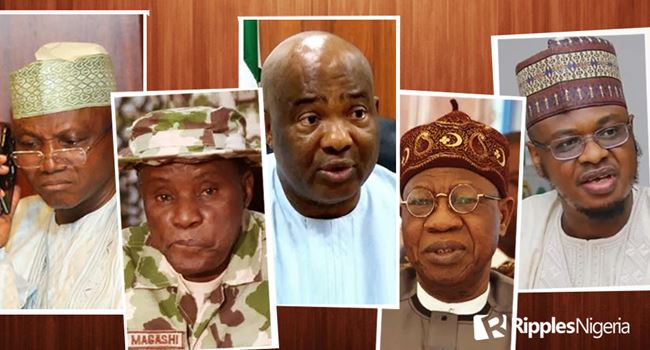 During the week in review, the Presidency gave Nigerians a rude shock by publicly lending its support to the embattled Minister of Communications and Digital Economy, Isa Ali Pantami, who has been in the eye of the storm over his alleged links and backing for global Islamic extremist groups, Al-Qaeda and the Taliban.

Also in the week, the Governor of Imo State, Hope Uzodinmma, was in the news as unknown assailants attacked his country home where part of his house and vehicles were razed, and two of his security details were killed by the invaders.

These and three other stories made our pick.

On April 22, the Presidency threw its weight behind Minister of Communication and Digital Economy, Isa Pantami, over his alleged link with the Taliban and Al-Qaeda, effectively knocking out deafening calls by Nigerians to sack the Minister.

In a statement issued by Senior Special Assistant on Media and Publicity to the President, Garba Shehu, the Presidency said the calls for Pantami to either resign or be sacked by President Muhammadu Buhari was uncalled for.

“The Minister of Communications and Digital Economy, Dr. Isa Ali Ibrahim Pantami is, currently, subject to a ‘cancel campaign’ instigated by those who seek his removal.

“The administration stands behind Minister Pantami and all Nigerian citizens to ensure they receive fair treatment, fair prices, and fair protection in ICT services.”

By rushing to cuddle Pantami on the grounds that he had ‘repented’, the Muhammadu Buhari administration reinforces the belief held by many that the government reckons little with the integrity and character of some of its team members.

The romance even deepens concerns about the country’s leadership recruitment process that panders to religious and ethic balancing instead of merit, competence and capacity.

Furthermore, it strengthens the feelings held by most critics that the regime may be unwittingly deepening the country’s fault lines by consciously accommodating extremists within its ranks while damming growing public resentments.

On April 24, Imo State Governor, Hope Uzodimma, was the target of a well coordinated attack when gunmen invaded his country home in Omuma, Oru East local government area of the state.

In the early morning invasion, two of the governor’s security aides were killed while a part of the house and several vehicles parked inside the compound were torched.

Briefing newsmen on the incident, the State Commissioner for Information and Strategy, Declan Emelumba, said:

“It is true, but the information is not still clear. It is not true that several security men lost their lives.

“About two security men on duty at the governor’s house were killed. One NSCDC personnel was among the security men who lost their lives during the attack.”

The attack on Uzodinma’s home clearly illustrates how closely the country has arrived at the doorstep of anarchy.

The question asked is, if a supposed fortress is overwhelmed how much more the lives and property of very vulnerable Nigerians.

And, for the South-East, the attack on Governor Uzodinma climaxes the reign of brigandage and terror that has overtaken the region in about one month.

If, as has been confirmed, elements of the secessionist movement, IPOB, were involved in a retaliatory attack over the killing of their commander, it bodes a more bloody and uncertain future in the region as well.

On April 22, the Minister of Defence, Major Gen. Bashir Magashi (retd), sounded a note of desperation that Nigeria is “currently bleeding from the activities of a few individuals in the country.”

While speaking to State House correspondents at the end of a presidential ministerial briefing in Abuja, Magashi said the government had done a comprehensive compilation of the identified enemies of the country.

Read also: QuickRead: APC’s rocking boat. Four other stories we tracked and why they matter

“Make no mistake, our nation is bleeding now. It is bleeding because of the self-interest and other primordial considerations of our religious, ethnic and political elite.

“Such elites are quick to apportion blames to groups other than theirs.

“The whole idea is to exploit the social division for their political gains and it is because of this divisiveness that Nigeria lacks a national consensus or common comprehensive understanding and the interpretation of what national security is.,” he said.

The emotions whipped up by Magashi, and his allusion to a shortlist of unpatriotic individuals, is a manifestation of an intra-class struggle, defined essentially by contestations for power.

Indeed, as acknowledged, his note of desperation and frustrations has nothing to do with the mass of Nigerians who are daily concerned with the quest for survival.

The threat to brandish a list must be seen, therefore, as a subtle dig and an attempt to blackmail rival elements in the intra-class struggle into a course of preferred action.

It is to be expected that in the months ahead, especially as the 2023 polls draw near, the contestations will grow fiercer and more rigorous attempts made to muzzle or hound the opposition.

It will remain a wonder why those the government have identified as being behind criminality in the country are not being rounded up and made to face justice. The delay may suggest it’s a fluke.

4. Blaming no one else but Nigerians

On April 23, the Presidency once again gave Nigerians something to chew on. It blame the citizens who have been calling for the sack of the Minister of Communications and Digital Economy, Isa Pantami, over his confession that he had sympathy for global terror groups, Al-Qaeda and the Taliban for not having a forgiving spirit.

Speaking through Senior Special Assistant on Media and Publicity to the President, Garba Shehu, the government slammed critics of the Buhari administration for their unwillingness to forgive Pantami, saying:

“Let me tell you this, people who stand in criticism of this position of the man who said he had wronged himself and society, and has apologised and they are not willing to forgive, are the problem.

“They are the ones who are deeply intolerant, and who are telling the world that in this country, we have the set of people who don’t forgive and don’t want to move on. They are the problem of the society.”

By choosing to heap much of the blames on Nigerians, and not the embattled Pantami, the Presidency criminally arrogates to itself the power that ordinarily resides with countrymen.

Indeed, it fails to comprehend that the highest office in the land is that of the citizen, and that they (citizens) reserve the ultimate right to demand transparency and accountability.

The blame game, as has been argued, supports claims that the presidency cares little about the character of some of its appointees, and that the President can do as he pleases.

This development holds dangerous outcomes in the future as a culture of impunity may rise as the the likes of Pantami and other appointees relish the backing of the presidency and go on to conduct themselves in manner suggesting that they can do anything and get away with it.

5. Lai on limits of sovereign power

On April 20, the Nigerian government took the United Kingdom to the cleaners when it frowned at the purported offer of asylum to members of the proscribed Indigenous People of Biafra (IPOB).

Minister of Information and Culture, Lai Mohammed, had said the decision by the British government to offer asylum to IPOB members was a slap on Nigeria as a sovereign nation.

“If the report that the UK will grant asylum to supposedly persecuted IPOB and MASSOB members is true, then something is wrong somewhere.

“Against the background of the fact that IPOB is not only proscribed but also designated as a terrorist organisation here in Nigeria, the UK’s decision is disrespectful of Nigeria as a nation.

“The decision amounts to sabotaging the fight against terrorism and generally undermining Nigeria’s security,” the Minister said.

Lai Mohammed may have stoked the diplomatic chords deliberately to force the review of a case that impinges on the reputation of the country. Indeed, as has been reported, the British government has had to revisit its earlier comments on the subject of asylum for perceived oppressed members of IPOB.

That said, the initial response of the authorities in UK is a clear indication that alleged incidences of human rights abuses in Nigeria and elsewhere will not go unnoticed and acted upon by the global community.

The lesson learnt is that international diplomacy and law clearly defines the limits of power of sovereignty. As it stands, the United Kingdom reserves the right to offer asylum to anyone it deems fit, especially those who can show evidence that they have been persecuted, victimized or mistreated by their country.

Till we come your way again, have for yourselves a wonderful week.

QuickRead: Buhari’s dirty fight back. Four other stories we tracked and why they matter

QuickRead: APC’s rocking boat. Four other stories we tracked and why they matter