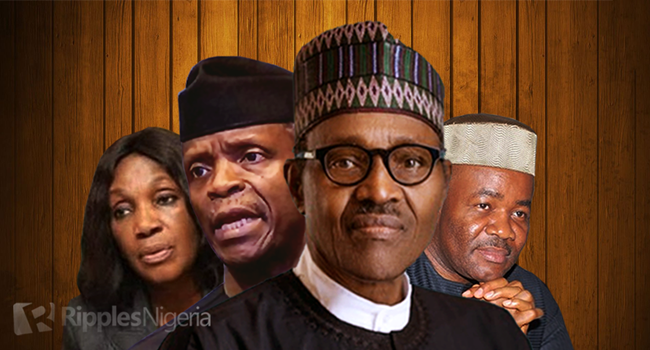 Joi Nunieh’s claim of giving the Minister of Niger Delta Affairs, Godswill Akpabio, a taste of Port-Harcourt girls for s*xually harassing her, as well as Vice President Yemi Osinbajo’s confession on the need to change tactics in the corruption fight, are among top political stories that made the headlines last week.

These stories will, no doubt, excite you but their implications for Nigeria’s political history can’t be ignored. Enjoy!

Following the ongoing probe of financial misappropriation in the Niger Delta Development Commission (NDDC), a former acting Managing Director of the commission, Joy Nunieh, on Monday, July 13 levelled scandalous allegations against Akpabio, including how the minister s*xually harassed her and got slapped in return.

“I slapped him. He tried to come up on me. I am an Ogoni woman and nobody jokes with us. I showed Akpabio that Rivers women do not tolerate nonsense,” she said.

Akpabio has since denied the claim and, according to his media aide, Anietie Ekong, directed his lawyer to institute a legal action against the woman who now prides herself as the first ever female from Ogoniland to slap a Minister.

Why it matters: The brewing scandal in NDDC clearly illustrates how the agency had become a play ground for thieving politicians across party lines, and why the country needs independent assessors of global repute to conduct a forensic probe of the agency from inception.

Deploying policemen from the Force Headquarters to prevent Nunieh and other witnesses from testifying at the probe panel is the clearest indication yet that there could be high level attempts to muddle up the ongoing probe by the National Assembly, and, perhaps, frustrate the entire exercise.

On Tuesday, July 15, Vice-President Yemi Osinbajo admitted that the tactics deployed in the ongoing fight against corruption in Nigeria must change for effective results.

“We must make corruption expensive for those who engage in it and send the unequivocal message that corruption simply does not pay.

“Domestically, we must also be prepared to change, to some extent, our tactics in the fight against corruption,” Osinbajo said.

Why it matters: There may be no bigger honour than Osinbajo’s admission that the tactics of fighting corruption in the country needed to be changed.

Osinbajo’s ‘Damascus’ experience shows that the country may just have been scratching at the issue of corruption. Any doubts must have been cleared by the current commotion witnessed in the house of the Economic and other Financial Crimes Commission (EFCC) whose helmsman is undergoing investigations for corrupt practices!

The confessions by the Vice President, if well meant, shows that the ruling All Progressives Congress (APC) may have decided to stop playing the Ostrich.

Of course, a reasonable question would be to query the next tactics and how soon it would be deployed.

After spending 10 days in detention the suspended acting Chairman of the Economic and Financial Crimes Commission (EFCC), Ibrahim Magu, on Wednesday, July 15 was finally released.

Magu, who was subjected to rigorous grilling by a presidential panel headed by a former president of the Court of Appeal, Justice Ayo Salami, over alleged malfeasance, said allegations levelled against him, was a case of ‘dog eating dog’.

Read also: QuickRead: Magu’s arrest, mudslinging in Edo; 4 other political stories that made headlines last week. Why they matter

Magu had said, “What I have gone through is a case of dog eats dog but I see it as one of those risks of the job. But we must not give up in any way.”

Why it matters: Magu, by his submission, confirms the suspicion and believe of most Nigerians that the political class have, all along, been in battle among themselves, in pursuit of greedy interests, to the detriment of ordinary Nigerians.

The other lesson to draw for Magu’s travail is the urgent need to build strong institutions with clearly defined processes and procedures. If executed, Magu, perhaps, would not have been made to undergo the same inhuman media trial he and his men had always subjected Nigerians to while he was in charge.

On Tuesday, July 14, the six states of the South-West region took a different stand from the Federal Government over the issue of students in the country not taking part in the 2020 West Africa Senior School Certificate Examination (WASSCE).

The Nigerian government had through the Education Minister, Adamu Adamu, cancelled its initial move to reopen schools across the country, adding that students in Nigeria would not participate in this year’s exam by the West African Examination Council (WAEC).

However, acting under the Development Agenda of Western Nigeria (DAWN) Commission, in collaboration with the forum of South-West education commissioners, the southwest States said they were ready to conduct WASSCE exams for the region.

Why it matters: The position of DAWN Commission provides some insight into the fault lines endemic in the country and why the matter of the nation’s unity remains a constant challenge.

If national cohesion were to be a fully resolved issue, primordial sentiments would not be a determining factor in deciding when and how students in Nigeria will participate in this year’s WAEC examinations.

This is evident in the position held by commissioners of education in the 19 northern States against their counterparts in the south as regards the WAEC exams.

On Thursday, July 16, President Muhammadu Buhari issued a warning to some ministers, and heads of departments and agencies, said to be disrespecting the National Assembly and its leadership.

Speaking through his Senior Special Assistant on Media and Publicity, Buhari warned, while meeting the Senate President, Ahmad Lawan and Speaker of the House of Representatives, Femi Gbajabiamila:

“That any disrespect to the institution by any member of the executive branch will not be accepted.”

Why it matters: That the President was, uncharacteristically, quick to react shows a high level of frustration and points to administrative chaos within the government.

First was the shouting match that recently occurred between the State Minister for Labour and Productivity, Festus Keyamo and a National Assembly committee on the 774,000 Federal Government job programme.

The incident was followed by the NDCC Interim Management Committee (IMC) Chairman, Professor Kemebradikumo Pondei, walking out on a committee of the House of Representative investigating alleged malfeasance at the commission.

Another case was that of the Inspector General of Police (IGP) directing his men to prevent the appearance of a witness at an ongoing National Assembly probe.

It remains to be seen if Buhari’s men will heed his advice.

The whole of last week was replete with stories emanating from the ongoing probe of the NDDC by the National Assembly members.

They revealed by how much the interventionist agency had been raped by those who were assigned to govern it. Humongous sums of money had been reportedly stolen over the years while recent developments suggest a grand plot to do a cover up.

At the last count, over N81billion was said to be have been embezzled while little was reserved for the development of the Niger Delta area itself.

Why it matters: The poor state of Nigeria’s oil region, despite billions of money budgeted for its development annually, requires that the NDDC be thoroughly probed.

The rascality exhibited by the NDDC management team shows that it cannot be trusted as a judge in its own case, which explains why many critics have argued that the top players of the commission be suspended to allow for a transparent investigation.