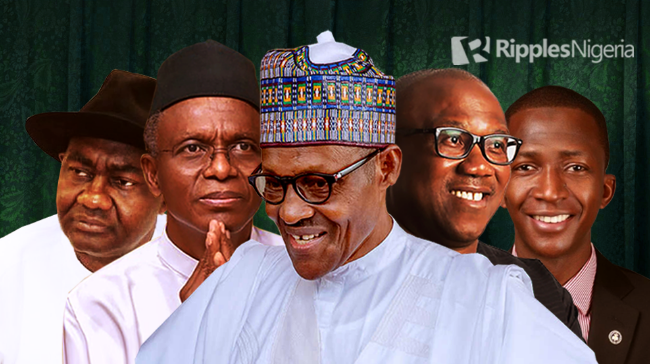 This and four other stories topped newspaper headlines last week.

A delegation of the NDI/IRI, led by the Secretary of State for Ohio, Frank LaRose, said on July 22, while presenting its first joint pre-election assessment report to journalists in Abuja, that there might be a runoff in Nigeria’s presidential poll in 2023.

The team described Obi and Kwankwaso as viable “third forces”, saying their emergence had given renewed hope for Nigerians.

It said: “The 2023 elections are a departure from some of the political dynamics that defined previous polls. For the first time since 2007, the presidential election will be an open contest with no incumbent. The ruling All Progressives Congress selected former Lagos governor, Bola Tinubu, as its flagbearer. Former Vice President and 2019 presidential candidate, Atiku Abubakar, will contest on the ticket of the Peoples Democratic Party.
“However, the emergence of Peter Obi — former Anambra State governor and presidential candidate for the Labour Party — and Rabiu Kwankwaso — former Kano governor and presidential candidate for the New Nigeria People’s Party — as viable ‘Third Forces’ has excited many young Nigerians.”

The institutes’ position aligns with the sentiment expressed by many that the 2023 elections will be the most intriguing in the country since 1999.

Although there is a new wave of enthusiasm, especially among the youth, to change the status quo in Nigeria with Obi in particular at the centre of it all, the odds are still firmly stacked against him due to a number of factors including a lack of solid structure by LP and collapse of the alliance with NNPP.

Despite the US institutes’ prediction, the early signs show that the 2023 elections might follow the pattern of previous polls in the country.

The Economic and Financial Crimes Commission (EFCC) on July 22 arraigned the suspended Accountant-General of the Federation, Ahmed Idris, for alleged N109 billion fraud.

The EFCC’s Head of Media and Publicity, Wilson Uwujaren, who confirmed the development in a statement, said, “The Account-General of the Federation, Ahmed Idris, was arraigned alongside three others on a 14-count charge of stealing and criminal breach of trust to the tune of N109, 485,572,691.9.
“Other defendants were Godfrey Olusegun Akindele, Mohammed Kudu Usman and Gezawa Commodity Market and Exchange Limited.”

The development shows that corruption remains pervasive in virtually every government institution in Nigeria despite the administration’s much-vaunted anti-graft campaign.

The arraignment of the AGF also reinforces the importance of law in the conduct of men.

It is, indeed, a sad reminder of the true state of the larger Nigerian society where top officials see public offices as opportunities to enrich themselves and regularly abuse their positions.

Read also:QuickRead: APC Muslim-Muslim ticket. Four other stories we tracked and why they matter

The Kaduna State government said on July 23 at least 1,837 persons had been killed by bandits and terrorists in the state in the last 18 months.

The state’s Commissioner for Internal Security and Home Affairs, Samuel Aruwan, disclosed this at a public presentation of reports on the “Southern Kaduna Pilot Peace Project on Inter-religious Harmony’ in Kaduna.

Aruwan said: “The Kaduna State Government is acutely aware of the devastating impact that conflict and violence have had on communities. In 2021, 1,192 people lost their lives in Kaduna State due to banditry, terrorism, communal clashes, violent attacks and reprisals; 406 of these lives were lost in the Southern Kaduna general area, mostly through killings and counter-killings.
“In the first six months of 2022, 645 people lost their lives in such circumstances across the state; 234 of these occurred in the Southern Kaduna area.”

The revelation sums up the collapse of Nigeria’s security system and the helplessness of governments at all levels to halt the country’s slide into a failed state.

It also shows that the nation’s security apparatus appears to be overwhelmed with criminals having a field day wreaking havoc on their hapless victims.

The Federal Government’s inability to tackle the problem head-on has emboldened the criminals to continue with their crimes against the state with virtually all parts of Nigeria currently battling with one form of insecurity or the other.

With the government and its security agencies appearing to be at the end of their wits on how to check the insecurity, it strengthens the arguments of critics who posit that unless the country seeks external support, Nigeria’s sovereignty may well be considered a foregone issue.

Abe, who featured in a Channels Television programme, Politics Today, revealed that he dumped the ruling party because the interest of the party’s members in Rivers State was not taken into consideration.

He added that his problem with the former Minister of Transportation, Rotimi Amaechi, was political and not personal.

The ex-lawmaker said: “Everybody knows that I have always given Amaechi 100 percent support in all he does.
“When he wanted to vie for the Rivers State governor, I supported him 100%. Even when he encountered problems, I still gave him my 100 percent support.
“Why can’t he do the same for me? My problem with Amaechi is not personal. I think it is political.”

Abe’s exit from the APC again reinforces the claim that politics is an interest-driven game.

It also shows that the in-fighting that cost the ruling party the governorship election in Rivers State in 2019 was far from over heading into next year’s election.

It remains to be seen how APC will mount a serious challenge for the governorship election in the state with Abe’s exit which came a few weeks after the party’s governorship candidate, Tonye Princewill, left the party over the decision to adopt a Muslim-Muslim ticket for the presidential election.

President Muhammadu Buhari on July 19 directed the Minister of Education, Adamu Adamu, to resolve the dispute with the Academic Staff Union of Universities (ASUU) within 14 days.

The president gave the order at a meeting with the minister and other agencies of the Federal Government at the State House, Abuja.

“President Buhari, after hearing from the relevant Ministries, Departments and Agencies directly involved, ordered the Minister of Education to ensure that the impasse was resolved within two weeks and report back to him.
“He also directed that the Minister of Labour and Employment, Chris Ngige, and Secretary to the Government of the Federation, Boss Mustapha, must attend all the meetings to be called to resolve the crisis,” a source at the meeting told journalists.

The president’s 14-day ultimatum could be another ploy by the government to buy time in the ongoing discussion with the Academic Staff Union of Universities (ASUU).

While the directive could be seen as a positive step by the president in the efforts to end the five-month-old strike, in reality, there appears to be no justification to extend talks for another two weeks with the issue of renegotiation already completed by both sides.

The presidency’s denial of the ultimatum has further also confirmed that the government was only paying lip service to the resolution of the crisis and had been playing to the gallery with regular appeals to the varsity lecturers to suspend their industrial action.

QuickRead: Govt’s planned sanction of media channels. Four other stories we tracked and why they matter

QuickRead: APC Muslim-Muslim ticket. Four other stories we tracked and why they matter