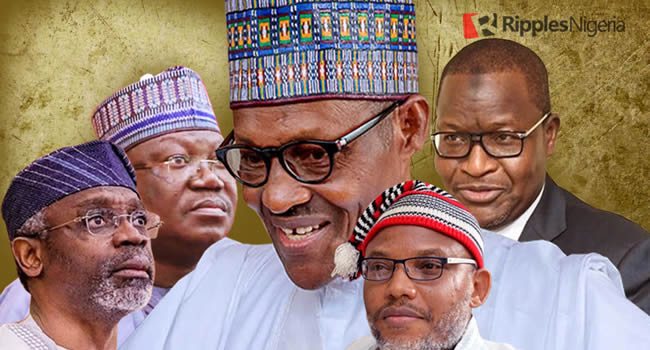 During the week in review, the Senate literarily became a war zone as supposedly distinguished lawmakers turned into warriors as the debate on the need to transmit election results electronically raged.

The scene the lawmakers created is a testament to what many think about the 2023 elections which might not be significantly different from other in terms of the integrity of its processes and outcomes.

We also tracked four other stories that got Nigerians talking during the week.

On July 15, distinguished lawmakers showed Nigerians the stuff they were made of as they turned the Senate into a war zone while considering the electoral act amendment bill, especially clause 52(3) which indicated that the Independent National Electoral Commission (INEC) may transmit results of elections by electronic means where and when practicable at its discretion.

Unable to bring the lawmakers to decorum, Senate President, Ahmed Lawan, had to order a closed-door session where 52 senators voted against transmitting election results electronically while 28 voted against and 28 were absent.

Why it matters
The voting pattern and conduct of lawmakers clearly show that the move to amend the Electoral Act and ensure electronic transmission of results, though well intentioned, was designed to fail.

It is easy to see through the grand plot of lawmakers to limit the independence of the electoral commission, INEC, by asking the arbiter to first seek approval from the Nigeria Communications Commission (NCC) before embarking on electronic transmission of results.

It is also not hard to predict that foundations for flawed polls ahead of 2023 are being significantly laid as the twin issues of transparency and accountability are shoved aside. We see pretentious warriors for democracy.

On July 16, the Nigeria Communications Commission (NCC) told the House of Representatives that only 50% of the country has 3G coverage, which is the requirement to transmit elections results electronically.

In his statement, the Executive Commissioner of the NCC, Adeleke Adewolu told lawmakers at the House of Representatives that while concerns over the electronic transmission of results are genuine, no system can guarantee a 100 per cent shield from hacking.

“For areas without such coverage, poll results can be recorded and thereafter uploaded in places where there is a network but this cannot be compared with the real-time upload,” Adewolu clarified.

Why it matters
While it is true that the country may not have total 3G coverage as claimed by NCC, there are sufficient grounds to believe that the agency had been recruited to act out a long script to scuttle the initiative on electronic transmission of results.

There’s, perhaps, no stronger evidence than the fact that NCC is an appendage of the executive whose intricate romance with lawmakers of the the dominant All Progressives Congress (APC) is an open secret.

Nigerians should expect more complex intrigues as the ruling party battles hard to retain its hold at the centre in the face of visible frustrations occasioned by bad governance.

On July 17, the Senate approved President Muhammadu Buhari’s request to borrow $8.3bn and €490m under the 2018-2020 External Borrowing (Rolling) Plan.

While presenting the report approving the loan, Chairman of the Senate Committee on Local and Foreign Debts, Clifford Ordia, said it “will be sourced from multilateral and bilateral institutions and the issuance of Eurobonds in the international capital market.

Why it matters
The continuous accumulation of foreign debts by the Nigerian Government raises serious concerns about mortgaging the future of Nigerians.

The fears are made real by the fact that the country has continued to devote over 70 percent of its revenue to debt servicing. While government claims that its standings on debt to GDP is fine, the bigger worry is that the ratio of revenue to GDP is abysmally low.

READ ALSO: QuickRead: Kanu’s ‘capture’, Igboho’s escape. Three other stories we tracked and why they matter

With Naira experiencing a free fall, insecurity and attendant job losses spiraling, the future of the country looks bleak economically and the accumulation of more debts will only exacerbate the situation.

On July 16, the Indigenous People of Biafra (IPOB) vowed to declare war on all politicians and traditional rulers from the South-East region, saying they would know no peace until Nnamdi Kanu is freed by the Nigerian government.

In a statement by IPOB spokesman, Emma Powerful, the proscribed group said South-East leaders are to be blamed for Kanu’s ‘current travail.’

“All along, IPOB has been peaceful while our members are being abducted and killed by security agents. Now, they have abducted our leader and these so-called Igbo leaders are keeping sealed lips. It is either they stand with the people or be counted among our enemies.”

Why it matters
The threat by IPOB to hunt down its perceived enemies in the South-East region is tantamount to self-sabotage, considering the attendant backlash and possibility of further dividing its ranks as opposition mounts against its dictatorial style.

Not even the most docile of governors will turn a blind eye while a group runs amok, threatening to constitute itself into plaintiffs, prosecutor and jury in a democracy. This latest IPOB statement is sure to alienate more Igbo people from their cause.

On July 14, Nigerian legislators in the upper legislative arm passed a bill that proposes a 10-year jail term for purveyors of hate speech in the country.

The bill also prescribes 20 years jail term without an option of fine for any person who ‘propagates information that undermines the independence, sovereignty, territorial integrity, or unity of the federation.’

“Any person who uses hate speech to stir up ethnic, religious or racial hatred, social or political, insecurity or violence, against anyone or group or person, is liable to 10 years in jail or N20 million fine or both,” part of the bill said.

Why it matters
There is need to forestall descent into anarchy in any sane society but dissipating so much energy on hate speech since coming into power goes to show how much the Buhari-led administration is trying to muzzle dissenting voices.

The bill in view, and the many others designed to stifle activities on social media and the operations of NBC, show concerted efforts at clamping down on anyone who criticises the government.

The desperation should serve as early warnings of descent into fascism, especially with the growing involvement of Nigeria’s secret police in dawn raids and killing of citizens at the homes of known opposition leaders.

Have a nice weekend.

QuickRead: INEC exposes lawmakers. Four other stories we tracked and why they matter.

ICYMI…QuickRead: Onochie’s punctured lies. Four other stories we tracked and why they matter