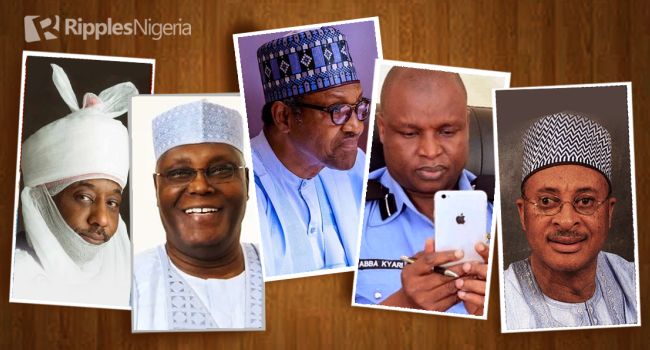 This and four other stories dominated public discourse in the week under review.

In a communiqué issued at the end of their meeting in Lagos on February 8 and signed by one Ms. Bilikis Bello for the National Secretariat of the National Consultative Front (NCF), the group said: “The various consultations and negotiations among parties and stakeholders (is) aimed at forming a formidable alternative democratic Mega Party to drive the political rescue and salvation of Nigeria through the ballot in 2023.”

The rise of the ‘third force’ speaks to how fluid the political environment can be, and how the average Nigerian politician fits into the perfect description of being a political animal.

It is a sad reminder of the evident lack of ideology as a major driving force among Nigeria’s political actors.

So, while this group may provide an alternative platform for Nigerians following the apparent abysmal performance of APC and PDP in the last 23 years, it is hard to see or dream of different outcomes as the ‘third force’ is primarily populated by many who have crisscrossed the two main political parties in Nigeria.

The former governor of Central Bank of Nigeria (CBN), Sanusi Lamido, on February 7 warned Nigerians to prepare ahead for tougher times even after the 2023 general elections.

Sanusi, who stated this at a reception organised for him as part of activities marking 80th birthday of Baba Adinni of Egbaland, Chief Tayo Sowunmi, in Abeokuta, Ogun State, said: “To be honest, we are living on extra time. In 2015, we were in a deep hole. In 2023, we will be in an even much deeper hole than in 2015.”

The deposed monarch’s remark speaks to the obvious. It is an invitation to fix Nigeria’s leadership recruitment process where ethnicity and other primordial considerations are given premium attention and merit relegated to the background.

Read also: QuickRead: Unmasking sponsors of terrorism. Four other stories we tracked and why they matter

More than anything else, especially in the face of festering insecurity, rising unemployment/poverty, deplorable infrastructure and official corruption, the focus of Nigerians in the search for the next set of leaders to pilot the country’s affairs should be on competence, practical knowledge of the economy and genuine ability to manage a heterogeneous society and its diversity.

The Police Service Commission (PSC) on February 11 ordered the force to complete the investigation of the Federal Bureau of Investigation (FBI)’s allegation against the suspended head of the Police Intelligence Response Team, Abba Kyari, within two weeks.

The PSC Head of Press and Public Relations, Ikechukwu Ani, who disclosed this in a statement, said: “Kyari had earlier been indicted by a report of the FBI and was also investigated by a special panel set up by the Inspector- General of Police.

“The IGP had earlier forwarded the FBI report to the Attorney-General of the Federation and Minister of Justice for legal advice.”

No doubt, failure to put a closure to the investigations of the highly-decorated officer helps to fuel insinuation of a cover-up by police authorities.

Considering the country’s poor transparency rating, and a notorious culture of sweeping high profile corruption cases under the carpet, it will be a tough task expecting the matter to be resolved too soon.

Former Vice President Atiku Abubakar declared on February 11 that there was no place for zoning in the country’s constitution.

Atiku’s disposition confirms the very popular saying that politics is an interest-driven game.

While purveyors of the zoning model acknowledge that it is a necessity in a diverse, multi-ethnic society (if only to ensure inclusivity), it is easy to see through Atiku’s arguments. His stance appears essentially driven by pursuit of personal interests.

This is especially so as the sentiments within his party, and the larger polity, suggests that there should be a power shift to the southern part of the country, even if it is unconstitutional.

All said, Atiku’s disposition continues to highlight the country’s fault lines and the trouble with Nigeria’s leadership recruitment process, where merit takes a back seat and primordial considerations are lifted high.

5. Buhari on importers of adulterated fuel

President Buhari said on February 10 all persons behind the importation and supply of adulterated petrol in the country must be held accountable for their actions.

His Senior Special Assistant on Media and Publicity, Garba Shehu, quoted him as saying:
“…the protection of consumer interests is a priority of the present administration and is ready to take all necessary measures to protect consumers from hazardous products, loss or injuries from the consumption of substandard goods.”

The adulterated fuel scandal further exposes the rot in NNPC, incidentally an institution where the president sits as substantive Minister.

It will be a pleasant surprise if the government matches its promise of dealing with the culprits with action.

Doubts as to government’s integrity cannot be divorced from its recent decision to literarily abandon reforms in the petroleum sector to the incoming administration in 2023.

Unless the Petroleum Industry Act is fully implemented, Nigerians should expect that lack of transparency will continue to shape the activities of NNPC.

QuickRead: Kyari’s drug travails. Four other stories we tracked and why they matter

QuickRead: Unmasking sponsors of terrorism. Four other stories we tracked and why they matter