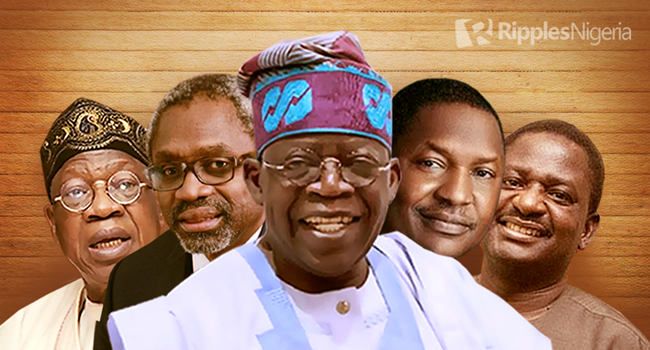 It was another week of intrigues in the Nigerian political sphere as the Presidency, once again, flew the kite by claiming it had evidence that some disgruntled political and religious leaders are conniving with foreign elements to stage a coup to remove President Muhammadu Buhari from power.

The Minister of Information and Culture, Lai Mohammed, also dropped a bomb when he stated that the prosecution of bandits and kidnappers was the job of state governments and not that of the Federal Government.

We also tracked three other stories that made the headlines and kept the polity bustling.

Enjoy our offering for the week.

On May 4, Special Assistant to President Muhammadu Buhari on Media and Publicity, Femi Adesina, made a very strong claim that the government had discovered plans that some “disgruntled Nigerians are setting the stage to compel a forceful and undemocratic change of leadership.”

This came on the heels of a submission by Department of State Securities (DSS) that there was a clandestine plan to stage a coup against the government.

Adesina had said, among others:
“Discredited individuals and groups are in cahoots with external forces to cause maximum damage. The Department of State Services (DSS), has alerted Nigerians on sinister moves by misguided elements to wreak havoc on the government, sovereignty and corporate existence of the country.
“Championed by some disgruntled religious and past political leaders, the intention is to eventually throw the country into a tailspin, which would compel a forceful and undemocratic change of leadership.
“Further unimpeachable evidence shows that these disruptive elements are now recruiting the leadership of some ethnic groups and politicians around the country, with the intention of convening some sort of conference, where a vote of no confidence would be passed on the President, thus throwing the land into further turmoil,” Adesina said.

Why it matters
Given a past history of flying the kite on many issues, the claims of a purported coup in the works might just be another deliberate attempt at creating a distraction in the face of overwhelming public outcry against the failings of government in meeting the expectations of citizens.

Picking on the opposition and refusing to mention names with credible evidence shows that the government might just have embarked on the path of lazy politicking which is aimed at keeping critics at bay and chipping away at their electoral values.

Government’s most recent claims, therefore, only serve to pull the wool over the eyes of Nigerians and keep them distracted from the litany of socio-economic and political challenges besieging the land.

Planning a coup against a sitting government is a treasonable crime and if Nigerians are to take the accusation seriously, the government should, indeed, name the plotters and bring them to book instead of flying a kite which many see as unnecessarily trying to create tension in the country.

Also on May 4, the Minister of Information and Culture, Lai Mohammed, gave reasons why the Federal Government has not been up and doing in the arrest and prosecution of bandits and kidnappers who have turned several states in the country into war zones.

Mohammed was responding to criticisms by the Peoples Democratic Party (PDP) on the insecurity situation the country.

“The PDP alleged that kidnappers and bandits are not being brought to justice. This is apparently aimed at the Federal Government.
“It is shocking that a party that ruled this nation for all of 16 years does not know that kidnapping and banditry are not federal offences.
“The PDP should therefore call out the states, including those being controlled by it to ensure a rigorous prosecution of arrested kidnappers and bandits,” the Minister said.

Why it matters
While the Minister may be right in saying that state governments should rise up to the occasion in the arrest and prosecution of bandits, he clearly shifted the goalpost in the middle of the game as the All Progressives Congress (APC) had promised Nigerians that they would do everything to combat insecurity in every part of the country.

Also, Lai turns truth on its head by conveniently forgetting that a greater percentage of incidences of insecurity recorded have been those in which the sovereignty of the country has been threatened, with ungoverned territories growing by the day.

Indeed, Lai unwittingly admits the failure of the Buhari administration by exposing its lukewarm approach to arresting and prosecuting bandits and terrorists, choosing instead to play the ostrich in the face of the country’s gradual descent into anarchy and a failed state.

On May 6, the House of Representatives once again called on President Muhammadu Buhari to declare a state of emergency over the spate of insecurity in Nigeria.

During plenary, the House reiterated its earlier call on Buhari to take decisive actions on the insecurity challenges the nation has been facing by “declaring a state of emergency on security nationwide, in line with an earlier resolution of the House of Representatives.”

“If no urgent step is taken to quell this stoking fire, the entire nation may be engulfed in a level of chaos unprecedented by such an incident in the past and may lead to a war of attrition,” a lawmaker, Obinna Chidoka, had said.

Why it matters
The bi-partisan call on government to declare a state of emergency on insecurity, as it continues to sweep through every part of the country, is a clear indication that the truth cannot be hidden anymore.

It is also an indictment on the administration for pussy-footing on the challenges and allowing them to fester over the years.

Therefore, the call by the Green Chamber holds out a promise that that the country’s leadership can be united and pursue a common cause in the larger interest of the country if petty politics is put aside.

On May 7, Attorney General and Minister of Justice, Abubakar Malami (SAN), promised Nigerians that some prominent businessmen and organisations will soon be prosecuted for alleged offences relating to terrorism financing in the country.

“As you will actually know, sometimes back, there were certain convictions of Nigerians allegedly involved in terrorism financing in the United Arab Emirates (UAE).
“That gave rise to a wider and far-reaching investigations in Nigeria. I’m happy to report that arising from the wider investigation that has been conducted in Nigeria, a number of people, both institutional and otherwise, were found to be culpable.
“I mean some reasonable grounds for suspicion of terrorism financing have been established…that a lot of Nigerians, high-profile institutions and otherwise, are involved in terrorism financing and they are being profiled for prosecution.”

Why it matters
As reassuring as the words of Malami may sound, there’s a disbelief that the administration would act given that such promises in the past did not see the light of the day.

The cynicism has been driven by the fact that weeks ago, the same government had declared that identified sponsors of terrorism in the country would be tried in secret, creating doubts about government’s commitment to transparency and integrity.

With names of suspects yet to be made public, there are growing concerns that the claims by government might just create a fertile ground to hound perceived enemies.

Indeed, government resort to blowing hot air is a danger signal that it is increasingly becoming jittery with a tendency to veer towards autocratic rule.

On May 2, former Lagos State Governor and acclaimed National Leader of the ruling All Progressives Congress (APC), Asiwaju Bola Ahmed Tinubu, called on aggrieved persons and groups calling for the break-up of Nigeria to consider the result of war in countries like Sudan and Iraq.

Noting that Nigeria was yet to recover from the Civil War which happened between 1967 and 1970, Tinubu had said:
“God will not allow Nigeria to experience war. If we say Nigeria should separate, people should remember what war caused in Sudan and Iraq. Such war does not end on time. We are yet to recover from the civil war.
“We are better together. I have nowhere I am going. Whoever has experienced war in the past will not pray for such. Nigeria will not separate; it’s not acceptable to us.”

Why it matters
The deafening clamour for secession coming from almost every part of the country is a testimony to how bad things have gone in the country, with the rise of ethnic and tribal warlords who have suddenly become heroes to their people.

Tinubu’s intervention, therefore, would only resonate with Nigerians if it does not only call for a treatment of the symptoms but a radical review of the fundamentals which have driven the country towards the precipice.

The hard realities are that the Nigerian project presently sits on very shaky foundations with some federating units feeling completely alienated and allegations rife that the President is not running an all inclusive government.

Worse still are claims that the constitution upon which the country draws its existence is unhealthy and requires total overhaul.

Unless Tinubu speaks to these issues, his counsel might yield no fruits with all the lethal implications for the country’s corporate existence.

Thanks for reading. Enjoy the rest of your week.

QuickRead: Adesina’s daring romance with Man City. Other stories we tracked and why they matter

QuickRead: Buhari’s dirty fight back. Four other stories we tracked and why they matter