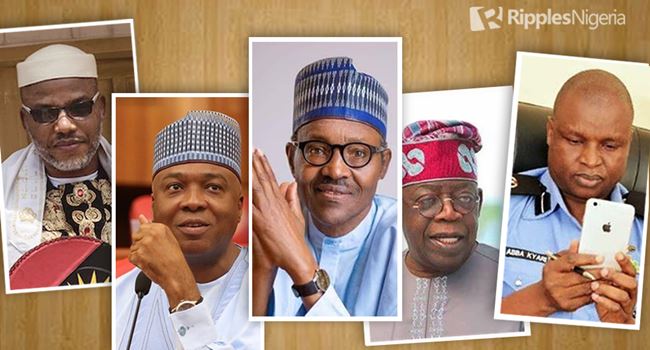 The pledge by the Nigerian government to fight corruption to a standstill may have lost a bit of steam but when it comes to former Senate President, Bukola Saraki, there may not be any respite for him anytime soon.

His recent arrest by the Economic and Financial Crimes Commission on allegations of fraud and money laundering is a testament to that.

Also during the week in review, we took a look at the rumoured health status of the National Leader of the All Progressives Congress, Asiwaju Bola Ahmed Tinubu, and what that portends for the political narratives in the country.

We also tracked three other stories that got Nigerians talking during the week.

On July 31, the Economic and Financial Crimes Commission (EFCC), confirmed the arrest and detention of the former Senate President, Bukola Saraki over alleged fraud and money laundering offences.

EFCC’s Head of Media and Publicity, Wilson Uwujaren, who confirmed the development, said the ex-Kwara State governor was invited for questioning over alleged corruption and money laundering.

“Former Senate President Bukola Saraki has been arrested by the EFCC. He is going to be released later tonight and ordered to return again tomorrow. He is being interrogated at the Abuja office,” a senior official of the anti-graft agency also confirmed.

The supposed arrest and interrogation of Saraki over fraud allegations may just have offered a fresh signal that the Buhari-led administration is not done chasing after allegedly corrupt Nigerians, especially those considered powerful.

The Saraki case is, however, interesting as the former lawmaker had once challenged his indictment up to the Supreme Court and came out vindicated. Nigerians would have to wait to see how these new set of allegations progress at the courts.

There is a growing sense of skepticism though that the government may also not be honest with its anti-corruption war considering how, in the recent case of allegations of rot in the Niger Delta Development Commission (NDDC), the ruling party had turned the blind eye.

On July 31, speculations over the health of former Lagos State Governor and National Leader of the All Progressives Congress (APC), Bola Tinubu, forced his media team to issue a disclaimer to dispel fears that he was seriously ill.

Tinubu’s spokesman, Tunde Rahman, who issued a statement, said the APC leader “is hale and hearty. He is not in any hospital.”

“Anytime he travels out of the country, the next thing some mischievous people would say is he is sick, hospitalized or has died. It is shameful that perpetrators of this evil are not deterred by the fact that each time this fake news has been propagated, they have been proven wrong,” he said.

With speculations rife that Tinubu is set to run for president in 2023, the alarm raised over his health status should be of great concern to Nigerians who are wary of having another president slowed down by constant ill-health.

While the rumours may have been dispelled, the leak, again, spotlights the decay in the country’s healthcare system, effectively querying the performance of the ruling All Progressives Congress (APC) in that sector.

That the President of the country and the acclaimed leader of the party would opt for medical tourism is an endorsement of lack of faith in the healthcare system, and an invitation to Nigerians to fend for themselves.

On July 30, the proscribed Igbo secessionist group, Indigenous People of Biafra (IPOB), issued an indefinite sit-at-home order to take effect every Monday till its detained leader, Nnamdi Kanu is released, vowing to cripple the Nigerian economy in the process.

In a statement by IPOB’S Media and Publicity Secretary, Emma Powerful, the group said the sit-at-home would commence on Monday, August 9, and would continue until Kanu is released.

Read also: QuickRead: INEC exposes lawmakers. Four other stories we tracked and why they matter

“We will cripple the economy with the sit-at-home protest till our leader is released,” the statement read in part.

The IPOB threat, and concerns that they may be able to execute their plans, continues to show the growing political strength of the organization.

It also draws attention to the ongoing trial of IPOB leader, Nnamdi Kanu, and why the exercise must be conducted transparently, in accordance with the rule of law, and dispensed with very quickly.

The South-East, and the country by extension, must brace for another round of anarchy unless quick political solutions are creatively sought to end the agitations all over the country.

In the indictment which was accompanied by an arrest warrant from a court in the United States, Kyari was allegedly implicated over his role in the fraud perpetrated by Hushpuppi also known as Ramon Abbas.

The emerging scandal further pulverizes the already-battered image of the Nigerian Police Force.

While Kyari may be presumed innocent until proven guilty, that Nigeria’s most wanted criminals are often caught outside the shores of the country leaves little doubt about the existence of internal collaborators and or serious structural weaknesses that make suspected rogues reign with impunity.

Cases in point include not just Hushpuppi but ex-Governor James Ibori and Invictus Obi.

How Nigeria responds in the weeks and months ahead to global demands for her to rein in notorious cyber criminals could determine her place on the world anti-corruption and transparency indices.

5. Sale of weapons to Nigeria

On July 28, some American lawmakers reportedly opposed a proposal to sell more weapons to the Nigerian government due to concerns over human rights abuses.

During a debate on the proposed sale of 12 AH-1 Cobra attack helicopters and accompanying defense systems to the Nigerian military, some US Democrats, led by Sen. Bob Menendez, chairperson of the Senate Foreign Relations Committee, called for the US to “institute a comprehensive review of its defence sales regarding whether the Nigerian military is doing enough to minimize civilian casualties in its campaign against Boko Haram and other violent insurrectionists.”

The searchlight on Nigeria’s human rights status speaks to concerns about global standards and how countries, especially those espousing democratic rule, must choose to live responsibly and in accordance with the rule of law.

Though the government, through the office of the Minister of Information and Culture, Lai Mohammed, has expressed ignorance of the purported story out of the US, shutting out Nigeria from future arms sales is bound to negatively impact the battle against insurgents and bandits.

Beyond sentiments, Nigeria must realize that if it’s human rights records remain doubtful, so long will sanctions of all sorts hold the country down.

QuickRead: Afenifere slams IBB. Four other stories we tracked and why they matter

QuickRead: INEC exposes lawmakers. Four other stories we tracked and why they matter.