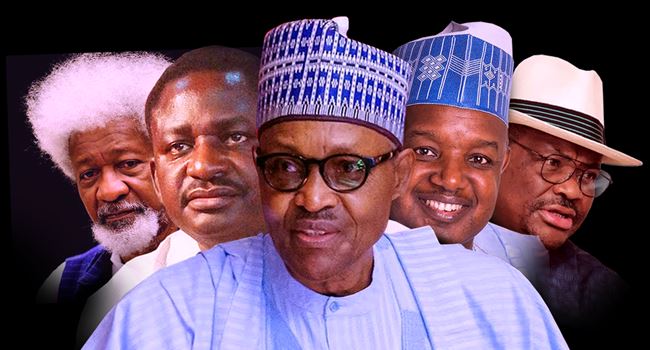 The past week threw up interesting talking points, chief of which was the strong reservations expressed by Nobel laureate, Professor Wole Soyinka, over Muhammadu Buhari’s perceived leadership weaknesses.

And, yet again, Nigeria was jolted by the troubling incidence of abduction of hapless students by bandits from schools, with government appearing increasingly helpless to deal with the situation.

We also tracked three other stories that made headlines in the media space and kept Nigerians talking.

“He (Buhari) should start talking to people like a leader, and a leader who is awake to the realities of the situation…He’s got to stop exuding false confidence because that kind of confidence is totally false…We have got to see an acceleration of actions to retrieve this nation from the very edge.

“It is no longer a problem of the people. It is a problem of leadership because the people have shown themselves ready to act, to save their own community,” Soyinka said in an interview on national television.

Soyinka’s vote of no confidence in Buhari adds to growing concerns over the president’s perceived poor leadership qualities and doubtful appreciation of the concept of emotional intelligence.

Indeed, Soyinka’s characterization of the Buhari administration aligns with the rising frustrations expressed by a significant percentage of the populace who daily groan with the pangs of insecurity, poverty and general misrule.

A deepening of these frustrations, many argue, is doing incalculable harm to the huge political capital once enjoyed by Buhari and the ruling All Progressives Congress (APC), and that the development could impact the polls in 2023.

On June 17, about 30 students and three teachers of the Federal Government College, Birnin Yauri, Kebbi State, were abducted by armed gunmen from the school in an attack which also saw the killing of one police officer guarding the school.

While narrating the incident, a teacher in the school, Abubakar Suru, said:

“When the bandits arrived, they were shooting into the air as they made their way to the school area. They were armed with sophisticated weapons and we have never heard gunshots in our lives. They entered the school at about 12:30pm and began shooting at the security personnel.”

The latest saga of the invasion and abduction of students of Federal Government Girls College, Birnin-Yauri, Kebbi State, clearly shows that the Nigerian State, led by President Buhari, has no discernible answers to the festering scourge.

That the Nigerian military was unable to take full advantage of prior intelligence also speaks to the waning capacity of the security agencies to contend with growing acts of sabotage by non-state actors, led by terrorists and bandits.

The gap is sure to see these agents of destabilization grow in confidence and seek to challenge the country’s sovereignty, and worsen the number of out-of-school students which has steadily climbed to over 13 million.

On June 15, the Governor of Rivers State, Nyesom Wike, cautioned President Buhari to stop shifting his constitutional responsibility of securing lives and property of Nigerians to the state governors.

He had said, “Mr. President, you are the Commander-in-Chief of the Armed Forces of the Federal Republic of Nigeria. You appoint the Inspector-General of Police; you appoint the Chief of Army Staff, Chief of Naval Staff, the Commissioner of Police, Director of Department of State Service, and other heads of security.

Read also: QuickRead: That snide remark by Buhari on ‘Lagos’

“Which one do we appoint? How can people appointed by Mr. President be under me? You must, also, be in charge of other things including security,” he said in a statement.

Governor Wike does well to hit the nail on the head by reminding Buhari that the country’s political system, as designed, places the responsibility of protection of lives and property on the President.

Even at that, it does not absolve the Rivers helmsman from taking proactive actions to deliver security to the people of Rivers State.

The knowledge that Nigerian governors have access to huge security votes is, therefore, sufficient grounds to also hold them accountable.

4. A promise too many

On June 18, President Buhari told a visiting group, the Muhammadu Buhari and Osinbajo Dynamic Support Group (MBO), that it was committed to delivering the dividends of democracy to Nigerians.

He said, “The birth of this book from inception to production is due to the unrelenting efforts of the MBO Dynamic Support Group officers, and over two million groups of supporters that have continuously stood by our administration in our quest to deliver on our social contract to all Nigerians and ensure the dividends of democracy to our people.”

Without matching words with action, President Buhari sounds like a broken record.

And, with less than two years left for the life of this administration, many Nigerians have continued to wonder when the many promises will finally see the light of day.

What this portends, in the face of grinding poverty and insecurity, is that the promises made may never be accomplished, and that the President might just be playing to the gallery.

On June 18, Special Adviser to the President on Media and Publicity, Femi Adesina, blamed former President Olusegun Obasanjo over the current confusion and woes in the country, warning the elder statesman to “mind his utterances.”

“The sabre-rattling about Nigeria’s unity and the possibility of disintegration has got to the point of Iberiberism (an Igbo word which could mean stupidity). Some people have no other business than doomsday predictions of a crumbled, collapsed Nigeria, as if they fast and pray for that eventuality,” Adesina wrote in his Facebook column, ‘From the Inside’.

The Presidency has become adept in playing the blame game and this seems a deliberate strategy to create distractions and take attention away from the critical issues bedeviling the country.

The tendency to always draw a battle line is indicative of a government impervious to constructive criticism and engagement.

The larger concern, therefore, is that the country might just be steadily crawling towards autocracy if critics continue to be hounded, blackmailed and intimidated into not holding government accountable.

We hope you enjoyed this offering till we come your way again next week.

QuickRead: Lawan’s grim revelations. Four other stories we tracked and why they matter

QuickRead: That snide remark by Buhari on ‘Lagos’