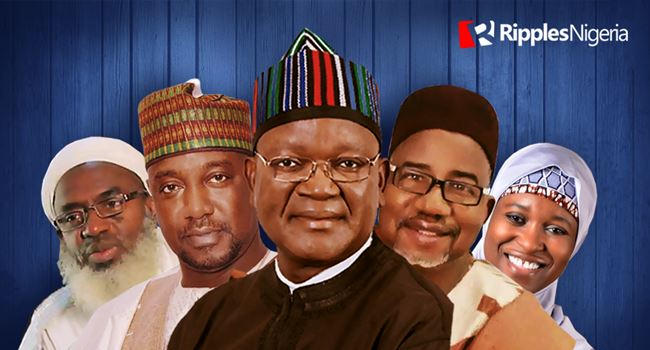 The Nigerian polity came alive last week as the Governor of Benue State, Samuel Ortom, and his Bauchi counterpart, Bala Mohammed, dumped decorum in the bin and threw shades at each, with accusations and counter-accusations over the criminal activities of some herdsmen.

The passing week also saw Sheikh Ahmad Gumi junketing the forests of the North-west and North-central Nigeria supposedly to win over Fulani bandits who had levied war against the country.

Enjoy three other stories we tracked which have broad consequences for Nigeria as a nation.

On February 22, Benue State Governor, Samuel Ortom lambasted his Bauchi counterpart, Bala Mohammed over his comments supporting the rights of Fulani herdsmen to brandish AK-47S in ‘self-defence’.
Ortom, in his statement, had said:

“I am beginning to think that my brother, the governor of Bauchi State is part of the terrorist Fulani organization that is terrorizing this country.

“Why do I say this? This is the same governor who took the oath of office to protect the constitution of the Federal Republic of Nigeria.

“It is quite disappointing to hear a governor who took the oath of office… Maybe he should go back and check the oath of office he took, to check maybe the constitution gives room for foreign terrorists Fulani herdsmen to come into Nigeria.”

The defence of Bala Mohammed regarding the rights of criminal herdsmen to wield AK-47s lends credence to quiet rumblings that a section of the northern political elite may be quite comfortable with the violent and criminal activities of some herdsmen.

Ortom’s righteous indignation can be construed as the salvo needed by an agitated citizenry to demand an honest conversation on the future of rickety federation, especially as the ability of the Federal Government to centrally manage the country’s sagging security is called to question.

Also on February 22, foremost Islamic cleric, Ahmad Gumi, stated that acts of banditry being experienced in some parts of the North, and increasingly creeping towards the South, are actually an ethnic war being waged against the rest of Nigeria by nomadic Fulanis.

During a guest appearance on television, the cleric was quoted to have said:
“What people consider as banditry is actually an ethnic war by nomadic Fulanis who feel that the existence of their ethnic group is being threatened by other tribes.

“One can, in fact, address them as militants. Their mission is not to kill. They want money having lost their sources of livelihood to cow rustlers. Where there are killings, they are mostly ethnic revenge because one or some of their kinsmen had been killed by people of other ethnic groups.”

The patronizing defence by Gumi of the bandits terrorizing Nigeria represents a rigorous but failed attempt to change the narrative on what is unarguably a national and global embarrassment.

His later effort at tagging Christian soldiers as killers of Muslims may have removed the veil on his real mission and portrays him as an ethnic jingoist and religious bigot.

Gumi’s claims, therefore, further deepens the country’s fault lines and enhances the calls for a national discourse on how its federating units can mend the ties between and amongst them.

On February 25, Aisha Yesufu, co-convener of the #BringBackOurGirls movement accused the Federal Government, Information Minister, Lai Mohammed, religious leaders and some governors of being the mouthpieces for terrorists and bandits.

At a guest appearance during the NBA Annual Law Week convention in Calabar, Yesufu had said:
“Terrorists have the FG and governors speaking for them; they have the Minister of Information, and religious leaders all speaking for them. Who do citizens have speaking up for them?”

Coming at a time when there seems to be a strong disconnect between government position and popular opinion, Yesufu’s comments speak truth to power.

Her charge is an invitation to citizens to demand accountability and transparency from their leaders.

Read also: QuickRead: The Ortom, Bala dirty wars. Four other stories we tracked and why they matter

The import of this clearly lies in the fact that the highest office in the land is that of the citizen which empowers the people to demand good governance and punish bad leaders by throwing them out of power through their votes.

Indeed, Yesufu’s comment hits the nail as it speaks to the many failures of Muhammadu Buhari-led administration.

On February 26, President Muhammadu Buhari gave reasons why the Federal Government had refused to use lethal force towards the rescue of victims kidnapped by terrorists.

In a statement issued by his Senior Special Assistant on Media and Publicity, Garba Shehu, Buhari had said:
“We have the capacity to deploy massive force against the bandits in the villages where they operate, but our limitation is the fear of heavy casualties of innocent villagers and hostages who might be used as human shields by the bandits.

“Let the bandits not entertain any illusions that they are more powerful that the government. They shouldn’t mistake our restraint for the humanitarian goals of protecting innocent lives as a weakness or a sign of fear.”

The rationale proffered by President Buhari over impropriety of force on terrorists may be a legitimate reason but has been a familiar escape route to justify negligence and inaction.

For any smart observer, the excuse highlights the failure of intelligence and near absence of modern technology to tackle Nigeria’s burgeoning security challenges. The recent release of a hostage by American forces in northern Nigeria rubbishes Buhari’s claims.

And, what this means in the long run is that unless the country’s military is better equipped with modern fighting weapons and gadgets procured, so long will it grope in the dark and risk embarrassing defeats in the hands of a growing band of bandits and terrorists.

In the early hours of February 26, gunmen attacked the Government Secondary School, Jangabe, in Talata Mafara local government area of Zamfara State and abducted over 300 girls from their hostels.

The gunmen, suspected to be Boko Haram insurgents, were reported to have stormed the town shooting sporadically into the air before invading the school to kidnap the girls.

The abduction of the Jangabe students is another pointer to the fact that the security situation in the country, especially in the northern region, is getting worse by the day.

Coming barely two weeks after terrorists kidnapped 38 students and teachers of Government Science College, Kagara, Niger State, the spate of abductions and senseless killings across the land may just add to dangerous signals that Nigeria is heading towards a failed state.

As more schools shut down due to activities of terrorists, the nation must brace for a future explosion in the number of out-of-school children in the north, with its attendant implications for literacy and poverty levels.

Do enjoy the rest of the weekend.