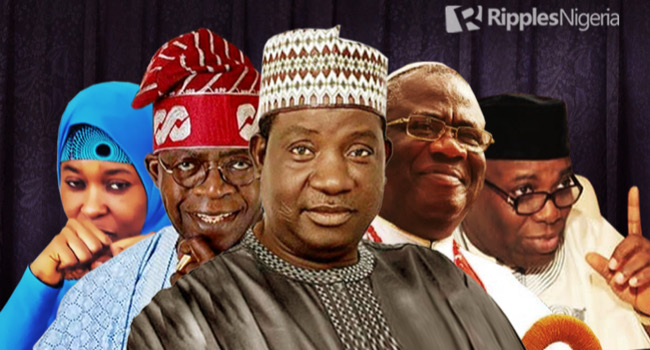 The National Leader of the All Progressives Congress (APC), Bola Tinubu, stunned Nigerians with his remarks on President Muhammadu Buhari’s victory in the 2015 presidential election.

This and four other stories we tracked made news headlines last week.

The ex-Lagos State governor, speaking in Ogun State on June 2, said Buhari would not have emerged the country’s president in 2015 without his support.

Tinubu had said: “If not for me that led the war front, Buhari wouldn’t have emerged. He contested first, second and third times, but lost. He even said on television that he won’t contest again.

“But I went to his home in Katsina. I told him you will contest and win, but you won’t joke with the matters of the Yorubas…This time, it’s Yoruba turn and in Yorubaland, it’s my tenure.”

Tinubu’s remarks on the President suggest a man who has had his back against the wall and had become agitated over the twist and turns that had characterised build up to the APC presidential primary.

It’s obvious the APC chieftain is concerned that plots within the party are targeted at him in a bid to deny him the best chance at becoming the country’s president.

Tinubu’s outburst was bound to ruffle some feathers. That has come by way of official reprimands by the party leadership.

The on-going quakes within the party may not subside soon, and are likely to have repercussions long after the presidential primaries. This is especially so because feelers from the ruling party secretariat suggest that moves to rotate power to the south are not fully resolved.

The Northern Governors’ Forum on June 4 declared their support for the Southern part of Nigeria to produce the APC presidential candidate for the 2023 elections.

Their statement read in part:
“After careful deliberation, we wish to state our firm conviction that after eight years in office of President Muhammadu Buhari, the presidential candidate of the APC for the 2023 elections should be one of our teeming members from the southern states of Nigeria.”

The governors’ position can be perceived as a decent move towards engendering a sense of equity, justice and fairness within the body politic.

It may be too early, though, to celebrate as there appears to be strong oppositions to the development as seen in recent organized demonstrations against power rotation to the south of Nigeria.

If not properly addressed, the resistance to a power shift may well widen the fault lines in a country still reeling from the worst security challenge in its chequered history.

Gunmen on May 29 abducted the Prelate of the Methodist Church Nigeria, His Eminence, Samuel Kanu-Uche and two other clerics in Abia State.

The cleric, who was released 24 hours later, confirmed that he paid N100 million to the criminals to secure his release.

Read also: QuickRead: Atiku’s emergence as PDP 2023 candidate. Four other stories we tracked and why they matter

He said: “The kidnappers demanded N150 million for three of us. After negotiation, they reduced their demand to N100 million but threatened to waste our lives if the money is not paid within a certain period of time.
“I immediately contacted my family and the church to quickly raise the money. The money was arranged in five sacks of N20 million each.”

The abduction of the clerics further highlights how dangerously the country is sliding into a state of anarchy, and deepens public perception of insecurity as the worst legacy that the Muhammadu administration is bequeathing to Nigerians.

However, the growing violence in the South-East may not be unconnected with contestations for power and, therefore, reinforces the call for quick political solutions before Nigeria falls over the cliff into the abyss of a failed state.

The Director-General of Peter Obi’s presidential campaign organization, Doyin Okupe, said on June 1 that the ruling All Progressives Congress (APC) and Peoples Democratic Party (PDP) had expired and would be voted out in 2023.

Speaking in Abeokuta, Ogun State, Okupe had said, among others, “There is no unrighteous and unjust pillar that will stand. The PDP was a good platform, but it has expired. The APC was never a good platform, it is of no consequence. The two parties are out, these two parties have expired, they have no relevance to the new things that Nigerians and the youths are looking for.”

Okupe may have hit the nail on the head in his assessment of the quality of leadership delivered by the country’s leading political parties over time.

It speaks to the loss of confidence in the two parties which between them had managed the country’s affairs for 23 years with nothing to show except a dysfunctional system characterized by massive corruption.

However, the so-called alternatives appear to be peopled by the likes of Okupe who cannot totally absolve themselves from the systemic rot having partaken of the historic mismanagement of the country.

If anything, Okupe’s posturing, and failed attempt at distancing himself from the two dominant parties he once served, is a clear manifestation that politics is an interest-driven game.

The Co-convener of the BringBackOurGirls movement, Aisha Yesufu, on May 31 urged Nigerian youth to place competence over undue influence in their choice of leaders in the 2023 general elections.

She tweeted thus: “Dear Nigerian youths, what are your terms? Are jobs open to all based on merit instead of connection? Enabling environment to be listened to and not tear-gassed or shot at when you protest? Being part of Governance? This is the time to negotiate. You have the upper hands…”

The activist’s comment is a direct challenge to Nigerians to elect leaders that will put the county on the right footing starting from next year.

Without a doubt, Nigeria is in a dire need of quality leadership to put the country back on the path of progress following the abysmal performance of the current administration over the last seven years.

The 2023 elections without doubt present the country with another opportunity to correct the mistakes of the past by electing individuals that tick the right boxes in our quest for quality leadership.

QuickRead: Tinubu’s success at the APC primary. Four other stories we tracked and why they matter

QuickRead: Atiku’s emergence as PDP 2023 candidate. Four other stories we tracked and why they matter