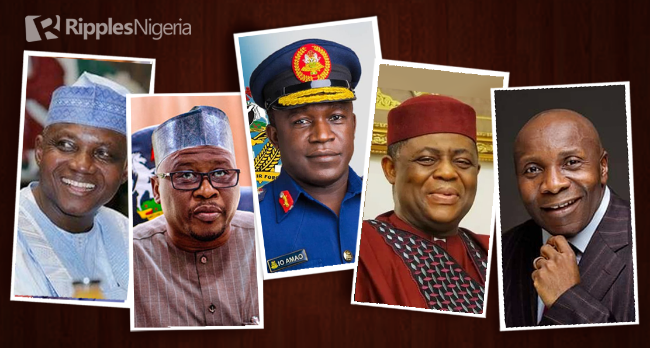 In the week in review, the supposed alliance between the Indigenous People of Biafra and the Yoruba Nation got the Presidency worked up.

Other stories also featured prominently in a week that witnessed the defection of Femi Fani-Kayode, from the Peoples Democratic Party (PDP) to the ruling All Progressives Congress (APC).

We tracked four of such stories that got Nigerians buzzing over. Enjoy this offering till we come your way next week.

On September 15, the Presidency got so worried with what it described as the “unhealthy cooperation between the Yoruba Nation agitators and members of the proscribed Indigenous People of Biafra (IPOB),” and issued a stern warning to the activists.

“It was shocking to see Yoruba Nation advocates unequivocally throw their lot in with Indigenous People of Biafra (IPOB). No one can take seriously this organisation if it continues its IPOB association. When their allies systematically trample human rights, it raises sober questions about their claims to uphold the values of the UN,” a statement credited to Senior Special Assistant on Media and Publicity to the President, Garba Shehu, read.

Why it matters
What this points to is the fact that the Presidency is unrelenting in its determination to cage all perceived opposition forces.

The other take away from the disposition of the presidency is that its remarks suggest a new strategy to play divide and rule as a means of breaking the ranks of agitators for self-determination.

On September 12, the Nigerian Army, once again, issued a warning to terrorists, insurgents, bandits and all criminal elements causing havoc in different parts of the country, to surrender.

Giving the warning was the Theatre Commander of Operation Hadin Kai (OPHK) Maj. Gen. Christopher Musa, in Maiduguri, the Borno State capital, during a solidarity visit by the Chief of Air Staff (COAS), Air Marshal Oladayo Amao, to the troops.

“This is a message to the remnants of the Boko Haram terrorists and other bandits for them to surrender now that there is still time for them to do so. It is a promise that those who refuse to surrender will face the wrath of gallant Nigerian troops. We will get you wherever you are hiding,” he said.

Why it matters
Placed in proper context, the warnings from the Nigerian military cannot be divorced from the use of propaganda as a tool in the execution of warfare.

It remains to be seen how the most recent claims have impacted the direction of the anti-insurgency wars as most images of surrender are those of women and children, as able-bodied insurgents seem stuck in the war games.

On September 15, the ruling All Progressives Congress (APC) defended the Federal Government’s request to the National Assembly for a fresh foreign loan running into N2.66 trillion ($4 billion and €710 million).

READ ALSO: QuickRead: Lai’s claims of ‘deep fake news’. Four other stories we tracked and why they matter

“Borrowings by the President Muhammadu Buhari-led federal government are for the good of the country as the money is used to develop critical infrastructure that is stimulating economic growth, generating jobs, reducing poverty and improving the general well-being of the citizenry,” John Akpanudoedehe, National Secretary of APC Caretaker and Extra-ordinary Convention Planning Committee, said in Abuja.

Why it matters
APC’s justification for external loans taken, as plausible as it may sound, portends some danger ahead for the country’s burgeoning population.

Succinctly put, it signposts a mortgaged future for coming generations as the major concern is what becomes of those who will inherit the loans.

On September 16, former Minister of Aviation, Femi Fani-Kayode, defected from the PDP to the APC, a party he had maligned at every given opportunity, calling them and Buhari all sorts of unprintable names.

“Joining APC now is the way forward, despite what people may think about it. APC is a liberal party. A lot has happened in APC over the years. The party has changed and President has accommodated the change. …I spoke against President Buhari from the outside, now I know him from the inside. The APC I was talking about that time is not the same today. Let’s focus on unity, peace, and togetherness,” Fani-Kayode was quoted to have said, among others.

Why it matters
Femi Fani-Kayode’s defection to a party he had sworn against is a clear testament to the fact that most Nigerian politicians are devoid of any ideology, honour, morality and integrity.

Typically, it also shows that the Nigerian politician owes no one any allegiance as far as he can get his nest feathered, at the detriment of the people he pretends to represent and speak for.

It further buttresses the argument of many critics who believe that there is essentially no difference between the ruling APC and the dominant opposition party, PDP.

On September 17, the Governor of Adamawa State, Ahmadu Fintiri, boasted, among others, that the Peoples Democratic Party would triumph in the 2023 presidential election.

Fintiri, the Chairman of the PDP National Convention Organising Committee, made this daring boast during its inauguration.

“We are in an extraordinary time and we expect to have an extraordinary National Working Committee after this convention. This is what Nigerians are expecting from us, so that it will be a takeoff point for this party going into 2023 election. And we are sure of winning the presidency and getting at least 28 governorship seats,” Fintiri said.

Why it matters
Fintiri’s daring claim is typical of the average politician who carries on as incurable optimist even in the face of overwhelming challenges and damning reports.

His action simply boils down to showboating as the internal wrangling within the party has continued to threaten its very existence, especially with many of its top members cross-carpeting to the APC.

If the PDP hopes to get back to power in 2023, it has to present itself as a serious opposition party, and not a gathering of strange bedfellows who are only in politics for their personal benefits.

QuickRead: Baba-Ahmed and ‘lazy’ southern politicians. Four other stories we tracked and why they matter

QuickRead: Gumi’s faceoff with Adesina. Four other stories we tracked and why they matter.