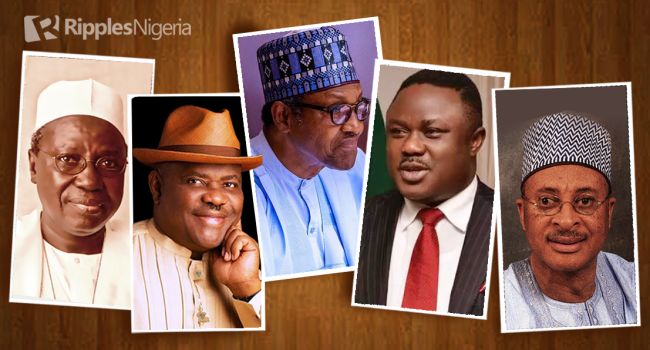 This and four other stories dominated the national discourse last week.

Utomi, who is the Convener of the Coalition of Concerned Citizens, stated this at a news conference on the state of the nation held in Lagos on April 8.

He said: “We must now forge a consensus and the national unity team an approach to governing during this season of a yet-to-be declared national emergency which poses an existential threat to all the parties notwithstanding.

“Where we are today, what Nigeria needs is a government of national unity. The reason we are all setting aside dominant groups and gladiators is to heal the wounds now in our country.”

Utomi’s remark shows how broken the country has become in the last seven years.
Although the government of national unity, often a contraption, is always utilized as a last resort toward the attainment of ephemeral peace, especially in cases of electoral disputes, the current situation in Nigeria has assumed a national emergency that requires all manner of solutions to heal the wounds occasioned by bad governance and put the country back on track.

Justice Taiwo Taiwo of the Federal High Court, Abuja, on April 7 dismissed a suit seeking to remove the Cross River State Governor, Ben Ayade, from office over his defection to the All Progressives Congress (APC).

The ruling illustrates the technicalities in the interpretation of the constitution on cross-carpeting by politicians, coming just a few weeks after the same court sacked the Ebonyi State Governor, Dave Umahi, for dumping PDP for the ruling party.

As the dust finally settles on the ruling, it again reinforces the call for amendment of the constitution to address the controversy on who actually owns the mandate between the parties and candidates.

Read also: QuickRead: Abuja-Kaduna train attack. Four other stories we tracked and why they matter

Without this, the onus lies on the Supreme Court to resolve the dispute on the age-long political nomadism, particularly in election years in Nigeria.

President Muhammadu Buhari on April 8 reaffirmed his determination to rid Nigeria of its “present mess.”

The President, who stated this when a delegation of the Institute of Chartered Accountants of Nigeria (ICAN) led by its President, Mrs. Comfort Olu Eyitayo, visited him in Abuja, “Having served as a military Head of State, and returned to politics to serve as a President, after losing three elections, I have seen the system of accountability in the country, and the mess to be cleaned up.”

The remark suggests the President’s admission of the huge rot in Nigeria under his watch.

The total collapse of the value system where no sector or institution in Nigeria is exempted from the malaise calls for retrospection and moral rebirth.

All said, the failure of the government at all levels has been fingered as the factor behind the endemic corruption and other social vices in the country, therefore instead of his usual rhetoric, the President should work towards changing the narrative in the next few months as his administration gradually winds down.

The Peoples Democratic Party (PDP) governors from the southern part of the country on April 9 challenged the party’s leadership to zone the presidential ticket to the region.

In a communique issued after their meeting held at the Akwa Ibom governor’s lodge in Abuja, the quartet of Nyesom Wike (Rivers), Udom Emmanuel (Akwa Ibom), Okezie Ikpeazu (Abia), Seyi Makinde (Oyo), Douye Diri (Bayelsa) and Ifeanyi Ugwuanyi (Enugu) said it was only fair and equitable for the party to zone its 2023 presidential ticket to the south.

It read: “We feel that the best thing to do is zone the presidency to the South, and we stand on that position.

“Our position is that first, we are committed to the unity of our party and we have worked hard to make sure that this party remains a strong and viable vehicle to ‘rescue’ Nigeria come 2023.”

Although the general mood in Nigeria is about a power shift to the South in 2023, the development does not indicate a transition in Nigeria’s democracy from being an experiment to a practice that has gained foothold 22 years after the military handed the baton of leadership to civilians.

The clamour for zoning and other unconventional approaches largely explain why the country is yet to get it right in its leadership recruitment process since 1999.

A former Minister of Foreign Affairs, Aminu Wali, on April 6 explained why Nigeria has been unsuccessful in its quest for a permanent seat in the United Nations.

Wali, who stated this during the public presentation of a book, “Reflections on Nigeria’s Foreign Policy” in Abuja, said: Although no other nation in Africa deserves the UN seat more than Nigeria, the country has not been able to attain it because despite suffering to ensure peace on the continent, it is not appreciated by other African countries.”

The ex-minister’s position shows that the era when many countries regarded Nigeria as “big brother” or important country in Africa is long gone.

The huge respect many countries accorded Nigeria in the early 70s and mid-80s has been eroded by the failure of successive governments to tackle the various problems including corruption, insecurity, and poor economy ravaging the country.

Many of the countries that hitherto looked up to Nigeria are now doing well and have overtaken the country in various development indices due to bad governance.

It is not a coincidence that Nigeria is now regarded as the poverty capital of the world with one of the highest unemployment rates in the world or a nation with the highest number of Islamic State (IS) attacks, overtaking even the war-torn Middle East nations of Iraq and Syria in terrorism.

QuickRead: Osinbajo’s 2023 declaration. Four other stories we tracked and why they matter

QuickRead: Abuja-Kaduna train attack. Four other stories we tracked and why they matter