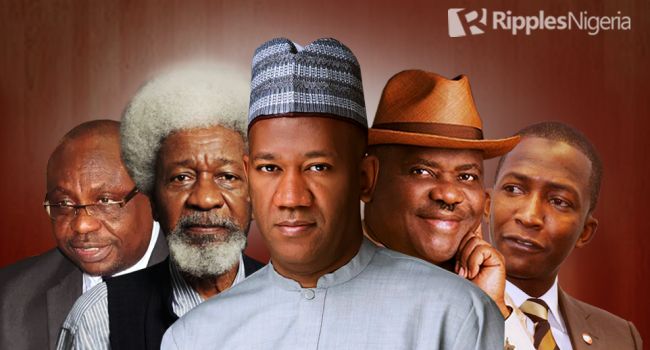 The governor met with the three presidential candidates at separate meetings in the British capital last week.

Wike later told journalists after he returned to the country on August 26 he was more interested in a better Nigeria, hence his decision to consult widely with people who want the best for the country.

He said: “Let me confirm to you that this is the first time as a team that we are meeting with presidential candidates.

“We met with the presidential candidate of the All Progressives Congress (APC) and we met with our leader, former president of Nigeria, Olusegun Obasanjo.

The meeting between politicians of opposite divides again reinforces the assertion that politics is truly an interest-driven game with the quest to achieve an immediate goal constantly dictating the action of the players.

However, the romance between Wike and Tinubu is likely to ruffle a few feathers in APC, especially in the camp of former Minister of Transport, Rotimi Amaechi, the governor’s main rival in Rivers State.

For Atiku, the ongoing quakes within the party may not subside soon, and are likely to affect preparations for the election. This is especially so because feelers among the PDP top brass suggest that moves to resolve the dispute, especially the one that concerns the national chairman, Iyorchia Ayu, are not fully resolved.

2. Soyinka on FG’s handling of herdsmen

The Nobel Laureate, Wole Soyinka, on August 23 questioned the Federal Government’s handling of the farmer-herdsmen dispute.

Soyinka, who featured in a Channels Television’s programme, NewsNight, said: “My temperament does not accept that anyone should chase me out of my God-given earth. So, it’s a temperamental thing as well.

“The idea that you can unleash terror on me because you want my little patch of territory or you want my soul, that is you want to subjugate me, you want to turn me into a slave. Well, I would sort that out first.

“I said this person should be arrested and locked up, who says he wants to repeat his history of conquest – he’s admitting either knowledge, before or after, or support, anyway. Isn’t there anything like hate speech anymore? Why are you proscribing IPOB without proscribing Miyetti Allah?”

The playwright’s remark illustrates the hypocrisy of the federal government in its handling of the country’s security challenges.

While the Muhammadu Buhari administration hurriedly proscribed IPOB and designated the group as terror organisation, it took sustained pressure from Nigerians for the government to designate the bandits as terrorists.

Read also: QuickRead: Wike’s threat on Secondus. Four other stories we tracked and why they matter

The government’s reluctance to move against the herdsmen causing havoc in Benue and other states in the North-Central will continue to agitate the mind and reinforce the insinuation on the pampering of the cattle prowlers by Aso Rock.

The Independent National Electoral Commission (INEC) on August 21 assured Nigerians that the electronic transmission of election results has come to stay in the country.

The INEC National Commissioner and Chairman, Information and Voter Education Committee, Mr. Festus Okoye, stated this in a statement in Abuja.

He said: “For clarity, the procedure for result transmission remains the same as in recent governorship elections in Ekiti and Osun. There will be no change in all future elections, including the 2023 general elections.

“We wish to reassure Nigerians that the electronic transmission of results has come to stay…There will be no change or deviation in subsequent elections.”

INEC’s remark speaks of its commitment to credible electoral process in Nigeria.
The electronic transmission of election results and other initiatives included in the Electoral Act will improve the electoral process known for all forms of irregularity such as result alterations, ballot box snatching and electoral violence.

All these will allow the commission to deliver elections Nigerians will be proud of as seen in recent elections in Ekiti and Osun States and ensure the people’s votes begin to count.

“The NDDC director was brought to our office in Abuja for questioning on his alleged involvement in the diversion of tax remittances in the commission,” a source in EFCC told journalists.

The NDDC case is particularly disheartening considering the fact that indigenes of Niger Delta have been fingered in the greed that undermines efforts at transforming the region from deprivation in the last 20 years or thereabout.

The unfolding events in the commission show that corruption extends to actors in all tiers of government expected to be the pivot for development in the country.

The Labour Party vice-presidential candidate, Datti Baba-Ahmed, said on August 23 that the All Progressives Congress (APC) lacked the political will to address numerous challenges confronting the country.

Baba-Ahmed, who stated this in a Channels TV programme, Sunrise Daily, said the party had completely failed to deliver on its campaign promises.

He said: “We will expand the recruitment process with an expansion of the police needed. 2015 was a mistake that should never be allowed to repeat itself again. There is absolutely no will on the part of the federal government to tackle the insecurity bedeviling the country considering its failure to deliver on its campaign promises.

“Furthermore, security votes to state governors should be monitored and these decisions are really difficult to make but this gives no right for anyone to pocket monies earmarked for security. This is why we need people who want to genuinely change the lives of the people.”

Baba-Ahmed highlights the failings of the APC-led federal government, especially on security and economy, in the last seven years.

However, election campaigns go beyond criticising the party in power, therefore instead of dwelling on the action and inactions of the ruling party, the onus now rests on the LP and other opposition parties to tell Nigerians what they will do differently if entrusted with power in 2023 instead of regaling Nigerians with woes of the past.

QuickRead: ASUU’s extension of strike. Four other stories we tracked and why they matter

QuickRead: Wike’s threat on Secondus. Four other stories we tracked and why they matter