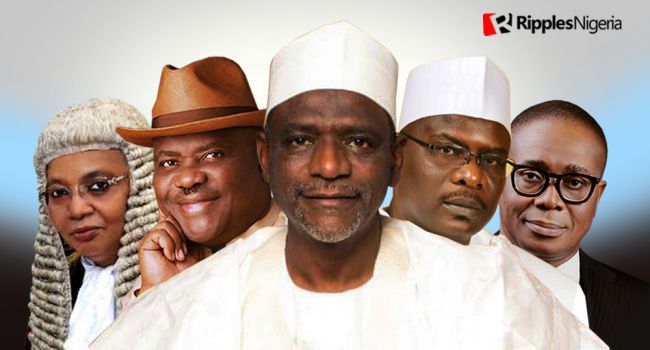 1. Wike’s threat on Secondus and allies

On August 20, Governor Wike, at the opening ceremony for the construction of internal roads in Omagwa, Rivers State, vowed to take the fight to any politician working for the former PDP national chairman

He said: “If anybody fights our system we will fight the person back…
“So all of you who are going back to Abuja to hold meetings with our enemies in the state, I’m going to finish you to the last.”

The governor’s remark speaks to the magnitude of the crisis in the major opposition party heading into the 2023 general elections.

Despite attempts to downplay the enormity of the crisis, the disagreements /in-fighting do not bode well for the party, and unless the PDP leaders quickly put their heads together and save it from drifting further, the party that once touted itself as the biggest and most powerful in Africa might as well kiss bye to its dream of regaining power at the centre in 2023.

The Federal Government on August 18 rejected the Academic Staff Union of Universities (ASUU) demand for payment of withheld six months salaries for its members.

The Minister of Education, Adamu Adamu, announced the government’s position at the ministerial media briefing held at the Presidential Villa, Abuja.

He said: “All contentious issues between the government and ASUU had been settled except the quest for payment of members’ salaries for the period of strike. This demand was flatly rejected by President Muhammadu Buhari.”

The reluctance of both parties to shift grounds or amicably resolve the grey areas in their negotiation means the students will remain at home for only God knows when.

Although the doctrine of “no-work-no-pay” is a fundamental axiom in industrial relations, a shift in position by the government would be seen as a sign of its desire for an immediate resolution of the faceoff and restore hope in the system.

Any extension of the disagreement will not only further diminish the little goodwill enjoyed by the Buhari administration, but it will also cast doubt on its commitment to the development of the education sector, in particular, and the country as a whole.

3. Ndume’s demand for a state of emergency

The senator, who featured in a programme on Channels Television, described the security challenges as disturbing.

Read also: QuickRead: Ortom’s move to procure firearms for security outfit. Four other stories we tracked and why they matter

He said: “The security agents are doing what they can under the circumstances in which they find themselves. We’re not doing enough in terms of providing necessary equipment for security personnel.
“We should declare a state of emergency on the security and welfare of Nigerians and begin to take care of other things when we are all safe.”

The remark by the lawmaker, a key supporter of President Buhari, illustrates how dangerously the country is sliding under the retired army general’s watch.

The remark might also suggest the lawmaker’s loss of trust in Buhari’s capacity to protect lives and properties in Nigeria due to the glaring failure of his government in all areas, particularly security, in the last seven years.

It is a direct challenge for the government to rework its approach, and if possible solicit foreign help instead of throwing up its hands in the air and allowing the terrorists free reign in the country.

The Managing Director of Nigeria Social Insurance Trust Fund (NSITF), Michael Akabogu, claimed on August 15 that evidence of the agency’s N17.158 billion expenditure has been eaten by termites and destroyed by rain.

Akabogu, who stated this when he appeared before the Senate Public Accounts Committee probing untraceable funds in the NSITF, said: “The container the said documents were kept by past management has not only been beaten by rains over the years but even possibly eaten up by termites.

Akabogu’s claim shows that corruption remains pervasive in virtually every institution in Nigeria.

It particularly points to the rot in the country’s civil service, especially in Ministries, Departments, and Agencies (MDAs) known for all kinds of impunity.

All said, unless a more comprehensive probe is instituted to unravel a system-wide malaise that has eaten up both the rank and file of the agency since its establishment in 1993, the national would to grope in the dark as corruption festers.

The Taraba-based kidnap kingpin, Hamisu Bala aka Wadume, has been sentenced to seven years imprisonment by the Federal High Court, Abuja.

Although the kidnapper was convicted one month ago, the report on the sentencing was made public on August 15.

Justice Binta Nyako, who delivered the verdict, said: “The prosecution did a quality job by proving its case against the defendants.
“Based on the evidence before this honourable court, Hamisu Bala aka Wadume is hereby convicted and sentenced to seven years imprisonment with hard labour.”

Although the sentencing may not have been perceived as commensurate with the crimes the kidnapper and his cohorts committed against the state, his conviction once again justifies the place of law in the conduct of men’s affairs.

It is also a reminder to all criminally-minded persons that they will always account for their actions no matter how long it takes or how powerful their backers might appear to be.

QuickRead: Wike’s meeting with Tinubu, Atiku, Obi. Four other stories we tracked and why they matter

QuickRead: Ortom’s move to procure firearms for security outfit. Four other stories we tracked and why they matter