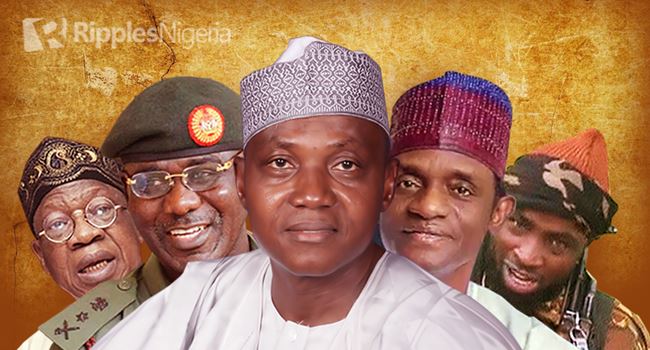 The nation was largely in mourning last week due to the cold blooded massacre of some farmers in Zabarmari, Borno State.

A few other stories made the rounds as well, and competed for attention. One of such was when the the Chief of Army Staff, Tukur Buratai, woke the country up to the realization that terrorism may persist in Nigeria for another 20 years.

These and three other stories form this week’s edition of QuickRead. Like always, we review the implications of these items for national development.

Nigerians woke up Sunday morning of November 29 to the news of the massacre of 43 rice farmers in Zabarmari, a community in Jere Local Government Area of Borno State.

Members of the local militia, who told journalists of the attack, said the terrorists tied up the workers in rice fields and slit their throats.

One of them was quoted to have told newsmen, “We have recovered 43 dead bodies, all of them slaughtered, along with six others with serious injuries. It is no doubt the handiwork of Boko Haram who operates in the area and frequently attack farmers.”

The Zabarmari massacre exposes the lies in the Nigerian government claims that its military are totally dominating the insurgency fight in the North-East of the country.

It further confirms fears that Nigeria’s security architecture has collapsed in the area of intelligence gathering, and that the Buhari-led government lacked the capacity to deliver on its promise to secure lives and properties, a primary responsibility of any government.

The gruesome killings also raise serious concerns over what has happened to the huge amounts of money that had been expended in the prosecution of the war against insurgency in the North-East.

And more importantly, the Zabarmari killings continue to query the rationale behind President Buhari’s decision to retain the services of his military chiefs who, from all indications, appear fatigued and seem to have come to their wits end in the fight against terrorism.

In the midst of renewed calls for the sack of service chiefs following the massacre in Borno State, the Chief of Army Staff, Lt. Gen. Tukur Buratai, on Tuesday, December 1 shocked Nigerians with a post on his verified Facebook page.

The army chief wrote, “There is a general misunderstanding of what insurgency and terrorism entail. There is the likelihood of terrorism persisting in Nigeria for another 20 years. It only depends on the level of escalation and the appropriate responses by all stakeholders, both civil and military authorities. Also, both local and international actors.”

Buratai’s claim of terrorism persisting in Nigeria for another 20 years is a hard truth. It’s a reality that even the worst of enemies must admit. And, the reason is quite obvious. Nigeria is fighting an unconventional war in which the theatre keeps shifting and the enemy has no regards for rules of engagement.

It’s, indeed, true that the country is in a long drawn war where the enemy’s battle strategy is underscored by hit-and-run approach. This is difficult to manage.

However, this does not mean that the Boko Haram elements cannot be contained. What Buratai and, indeed, the Nigerian government would not publicly own up to is that corruption has sipped into the war and is probably the most potent reason why the insurgency would fester and, may be, last forever.

So, Nigerians should expect a rapidly expanding war industry in which all combatants and government officials deliberately create value chains that benefit critical stakeholders and ensure that the war never ends, even as citizens pay with their lives.

Finally, the reality check may now reveal that the constant claims by the military and the Nigerian government that terrorism in the North-East had either been ‘degraded’, or ‘technically defeated’ amount to mere propaganda.

It is doubtful if Buratai and other service chiefs will, on the basis of this revelation, cause their own resignations as their best look not good enough by the judgment of the populace.

Governor Mai Mala Buni of Yobe State trended on social media on Sunday, November 29, following his response to claims that he had abandoned his gubernatorial duties as being alleged by critics.

The governor, who also serves as the caretaker Chairman of the All Progressives Congress (APC), said during an interview with BBC Hausa:
“On the issue of staying, there is no way I can spend a month without spending three or four days in Yobe State. And then, even if I return to Yobe, I won’t advertise or make it public… I won’t be revealing to the public that I came to Yobe or when I am leaving.”

Governor Buni’s lame justification for committing just about four days in a month to direct governance of the State smacks of complete disregard for the citizens.

It illustrates the poverty of leadership, one in which mediocrity and arrogance have been elevated as statecraft.

Indeed, Buni’s inglorious defense depicts the helplessness of a conquered people by a supposed leader who now sits as an oppressor over the citizens.

Buni’s conduct is a clear reign of impunity!

On Monday, November 30, the Senior Special Assistant to the president, Garba Shehu, surprised Nigerians with his claim that the farmers, slaughtered by Boko Haram insurgents on Saturday, November 28, failed to obtain clearance from the military before going to rice farms.

Shehu had said, “Truth must be told that they were not supposed to be on their farm because they did not get permission from the Nigerian Army. Much of those areas have been liberated from Boko Haram terrorists but there are a number of spaces that have not been cleared for the return of villagers… So, ideally, all of these places ought to pass the test of military clearances before farmers or settlers resume activities on those fields.”

Blaming the dead is an indication that Buhari’s image-makers will stop at nothing in their frantic efforts to burnish a reputation burdened by apparent failures.

Unfortunately, Garba’s most recent outburst, considered very insensitive, adds to the litany of mistakes which have combined to diminish the administration’s political capital.

Uncomfortable with torrents of calls demanding Buhari’s resignation as president, following the killing of 43 rice farmers in Borno State, the Minister of Information and Culture, Lai Mohammed, on Thursday, December 3, described Nigerians who made such calls as being irresponsible.

Minister Lai said, “In the wake of the killing, there have been calls in some quarters for Mr President to resign. Well, let me say here that this call amounts to playing dirty politics with the issue of security, and it is cheap and irresponsible.”

Lai Mohammed’s reprimand of critics is sheer hypocrisy, as the administration he champions is more than guilty of the same charges he had levied against perceived enemies.

To conveniently forget that the ruling All Progressives Congress (APC) had once called on the then President Goodluck Jonathan to resign strengthens the argument of many who see Lai as one suffering from selective amnesia.

If anything, Lai’s statement can be put down as a desperate kick intended to silence or intimidate citizens whose right to demand good governance are fully protected under the constitution.

The resistance to constructive engagement may yet signal a gradual descent into authoritarianism which could act as a trigger for pent up anger to snowball into serious agitations.