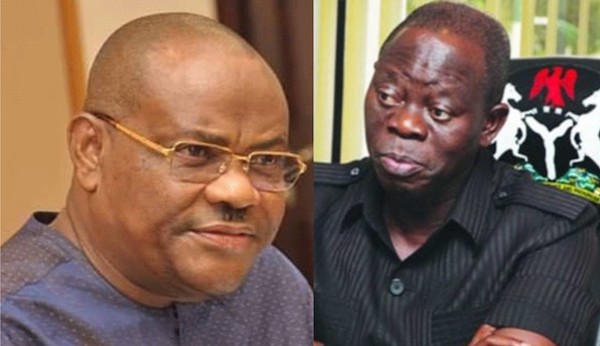 River State Governor, Nyesom Wike, on Saturday asked the National Chairman of the All Progressives Congress (APC), Adams Oshiomhole, to resign honorably over his inability to stop Friday’s inauguration of Douye Diri as Bayelsa State governor.

Wike, who addressed the media in Port Harcourt, said the APC would never succeed in wrestling political power from the Peoples Democratic Party (PDP) in Rivers.

He said: “This is a country where you see people who do not have character. Today they sing a song, tomorrow they sing another. I think Oshiomhole as National Chairman of APC is not a character anybody should associate with.

“First, I have never been violent, will never be. However, when you see an armed robber come to your house, will you plead with the robber and say I beg you, leave my house. People think armed robbers are only those who cart away people’s money.

“The worst form of armed robbery is when you steal people’s mandate, like Oshiomhole is noted for. He thinks because he’s in the ruling party, he can use security to steal the mandate of the people. He was taught a lesson, a bitter lesson and I want to repeat, if you come to steal our mandate, the people will respond accordingly.

“They will oppose your stealing of their mandate and so Oshiomhole thinks because he is in the ruling party nobody should say anything or do anything. Stealing is not only when you go to rob a bank. The worse form of armed robbery is when you steal the mandate of the people.

The governor also accused the APC chairman of always being driven by survival instincts, saying he stopped attending the National Economic Council (NEC) when Oshiomhole turned it into a forum for bashing former President Goodluck Jonathan after initially praising the ex-President at Aso Rock for ensuring credible elections.

The governor added: “When Jonathan made sure elections were free and fair, Oshiomhole came to the Villa and thanked Jonathan. When Jonathan left office, one of the reasons I don’t go to NEC meeting is because of Oshiomhole when he was yet a member.

“When Jonathan left, there was no day at the NEC meeting Oshiomhole will not bring Jonathan down. Meanwhile, that was the same man Oshiomhole went to praise for allowing one man one vote. The man left and Oshiomhole changed. That is his character.”

“Nigerians know the matter that led to the amendment of the electoral act where governorship election has to go to the Supreme Court was because of Oshiomhole. So he cannot come out and say he was clean in terms of electoral process. That will be very bad.

“Oshiomhole said he fought godfatherism and the same time he wants to install himself as a godfather in Edo State. Why is he fighting Obaseki? The reason is because the man doesn’t take instruction from him. He preaches what he does not practice. “