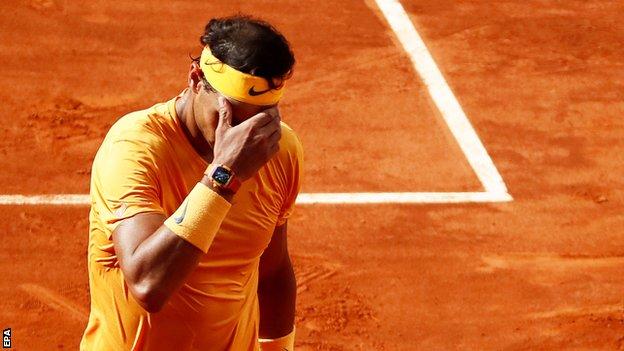 Rafael Nadal was Friday forced to his first clay-court defeat in almost a year by Dominic Thiem in their Madrid Open quarter-final encounter.

Nadal, who reached a record 50-set unbeaten run on the surface on his way to the last eight, was beaten 7-5 6-3 by Thiem.

Austrian Thiem, who was the last man to beat Nadal on clay back in 2017, advances to the Madrid semis where he will play South African Kevin Anderson.

Defending champion Nadal, who came into the tournament having won his 11th titles at Monte Carlo and at Barcelona, was seeking a sixth title at the Spanish capital.

When asked after the defeat if Thiem was one of the toughest opponents to face on clay, Nadal pointed out that he destroyed him in Monte-Carlo just weeks ago and insists Thiem needs to find more consistency if he’s to be considered a truly ‘tough’ opponent.

“This week, of course, he has been the toughest opponent. There is no discussion about that. This is the reality.

“If he beats me three times in a row, maybe we can say he reads my game and can beat me. Today he was better than me, and that’s all,” he added.

Nadal will be replaced by Roger Federer as world no. 1 as a result of the defeat.

Meanwhile, he remains a hot favourite for Roland Garros and will be world number one again if he wins in Rome next week.