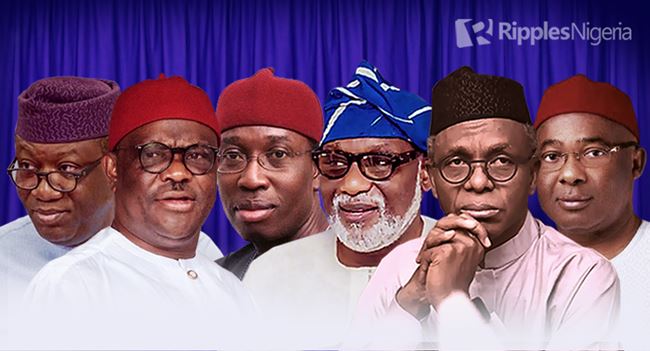 Appraising Nigerian Governors has become a major feature of Ripples Nigeria and has been running for over two years. Through it, we are constantly reminded of the foremost objective of the publication, which is to hold elected leaders, specifically at the state level, to account and rate the impact of their administration on the lives of Nigerians on a monthly basis.

In doing this, under strict compliance with our set parameters, we remain well aware of the many challenges that have made governance a daunting task in this part of the world. These are represented by fast-dwindling resources, growing rate of insecurity, and constitutionally imposed limitations on the powers governors can exercise.

We are, however, equally mindful of the fact that Nigeria, as a vastly blessed nation with abundant human and natural resources, can be well managed. We reckon that any good manager with great and proactive thinking can still make a difference. We are convinced that any leader worth their title can still, under these identified odds and artificial limitations, provide a level of succour to the populace.

In the month of February, 2021, we observed a new trend by Nigerian governors as they threw caution to the wind and became some form of attack dogs, lashing each other in a competition for who has the most caustic mouth and who can best play in the gutters. For us and most Nigerians, we hope, it was a show of shame that betrayed their exalted office. It was truly a month of absurdities.

The month of March threw up greater challenges in governance in the country which of course are best seen through happenings in the State. We observed and concluded that the nation kept sliding down at an alarming rate, with the governors of Kaduna and the South-East states adjudged to be perfect representatives of the failure of governance that has come to be the lot of the country lately.

In a major deviation from our traditional monthly ranking, we have decided to lump April and May together primarily because for months now, we have been unable to rank anything notably positive about Nigerian Governors. The month of May, however, presented a glimpse of hope, something worth cheering, and an indication that all hope was not lost.

The months under review, April and May, witnessed a combination of both gory and hopeful pictures for governance in Nigerian states as represented by governors, as we saw both the negative impact that lack of leadership can have on a people, and fresh hope that the reverse can offer.

Governor Nasir el-Rufai of Kaduna State has continued to be in the news, and most times for the wrong reasons, as his state continued to be ravaged by banditry and all sorts of criminality.

Though we acknowledge the fact that insecurity has become a national phenomenon, we are, however, constrained to believe that the handling of same by state governors has continued to make the difference and give hope in some other states of the federation.

We are appalled by the lack of tact and human feelings in Governor el-Rufai’s handling of the cases of mass abduction of students in the state, especially those of the Federal College of Forestry Mechanization, Afaka in Igabi Local Government Area of the state and the Greenfield University located on the now dangerous Kaduna-Abuja Highway in the Chikun Local Government Area of the state.

We are tempted to believe that if the Kaduna State governor had been more tactful, displayed some kind of human feelings and acted as a proactive leader, the five students of the Greenfield University who were killed by their abductors would still be alive today.

Unfortunately, their lives were cut short due largely to the hardline posturing and unguarded utterances of the talkative governor.

We also frown at el-Rufai’s comment that he was prepared to sacrifice some of the Afaka students in favour of the bombardment of the location of their captors while they were still in custody. We condemn not just the planned murder of innocent students whose only crime is pursuing education for a better tomorrow, but also how the governor recklessly divulged such a sensitive operation information without any form of decorum.

It is appalling that el-Rufai could come to the public to inform Nigerians, including parents of the students, that he had planned to murder them alongside the bandits who abducted them.

We also note the recent faceoff between Governor Nasir el-Rufai and the leadership of the Nigeria Labour Congress (NLC), his mass sack of all nurses under grade level 14 in the services of the state government and threats to sack lecturers at the state university for daring to join the strike ordered by the NLC to protest the mass sack of workers in the state.

With the episode of last week, we are afraid that el-Rufai has either slided ingloriously into dictatorship or he is simply showing his true colours as a man who cannot stand opposition.

South-East Governors and the Unknown Gunmen

If there is any group of people who captured the attention of Nigerians in the months of April and May, it is the legendary Unknown Gunmen, mischievously abbreviated as UGM.

We note that the UGM are now the star performers in the country’s growing insecurity, especially in the South-East geopolitical zone and parts of the South-South. We, however, note most unfortunately, that the governors of Imo, Enugu, Ebonyi, Abia and Anambra have not been able to find an answer to the scourge.

Though we acknowledge their late coming formation of a joint security outfit, Ebubeagu as an answer to the growing violent attacks in the South-East, we are concerned that not much has been heard or done about it since its announcement and the initial frenzy that followed.

We also note the various utterances of Governors Hope Uzodinma of Imo and David Umahi of Ebonyi over those responsible for the attacks. While Uzodinma, immediately after the attack on the Owerri Correctional Centre and the State police headquarters, Owerri, rushed to announce that members of the Indigenous People of Biafra (IPOB) were responsible. He however, days later, changed the narrative, concluding that politicians were behind the attacks and not IPOB.

Similarly, Governor Umahi has consistently insisted that politicians and not IPOB were behind the attacks just like Uzodinma. Sadly, they have failed to attach names or assisted security agencies to unravel the mystery behind the famed unknown gunmen.

We are concerned that as governors and Chief Security Officers of their respective states, Uzodinma and Umahi should have been more circumspect in their utterances, especially as it concerns issues of security and matters under investigation.

We note that pointing accusing fingers at different directions in a matter under investigation could impact negatively on its outcome, especially when the person making the accusation is a state governor.

Southern Govenors Jolted Back to Life!

The recent meeting of the Southern Governors’ Forum (SGF) in Asaba, the Delta State capital, has continued to dominate national discourse, with support from unlikely quarters and of course, opposition from some others.

While we acknowledge that such meetings as held by the SGF may be routine and expected from time to time as they rub minds, we admit that the resolutions reached at the Asaba meeting were not envisaged or expected by many Nigerians, who had written off state governors as mere figure heads and toothless Bulldogs that could never bite.

We acknowledge that the governors for once got things right with their resolutions and demands which include restructuring, ban on open grazing, convocation of a national dialogue, reversal of lopsided federal appointments and a firm demand that President Muhammadu Buhari address the nation over the security challenges facing the country.

We admit that the resolutions and demands are at the core of the yearning of majority of Nigerians and that the Southern governors have just spoken their minds!

We also applaud the ability of the governors to put aside party interests and prejudices to speak with one voice for the good of their people. We also acknowledge their apparent commitment to the resolutions as none of them has said anything contrary since opposition came up, especially the gaffe from the Attorney General of the Federation and Minister of Justice, Abubakar Malami.

We especially recognise and acknowledge the leadership role played and being played by the Chairman of SGF, Governor Rotimi Akeredolu of Ondo State in rallying his colleagues and standing firm to defend their position. It is our belief that Nigeria will be a better place if governors and elected leaders can put aside partisanship and work for the good of the people. Everything is and should not be about party politics.

As Nigerians continue battling insecurity, high cost of living, rising unemployment and many other challenges, a committee set up by the Nigeria Governors’ Forum on subsidy removal came up with a recommendation that the pump price of the Premium Motor Spirit (PMS), widely known as petrol, should be N380 per litre.

We take cognisance of the fact that its original recommendation was N408 but toned down to N380, in deference to labour, according to it.

We are, however, convinced that the NGF and its committee have failed to take into consideration the plight of the ordinary Nigerian who will be worst hit by their proposed new pump price which they said should be the minimum.

We are concerned that in taking this decision, the governors only focused on what will come to the coffers of government and how to plug the billions the Nigerian National Petroleum Corporation (NNPC) claims to pay as differential on monthly basis, without considering what the new pump price will mean to ordinary Nigerians who are already hard hit by an unfriendly economy.

Though we acknowledge the concerns of the governors on the payment of the differential (another clever name for subsidy) by NNPC, we would have expected the state chief executives to advise the Federal Government on reviving the refineries or encouraging Nigerians to invest in them so as to discourage and completely stop the importation of refined petroleum products.