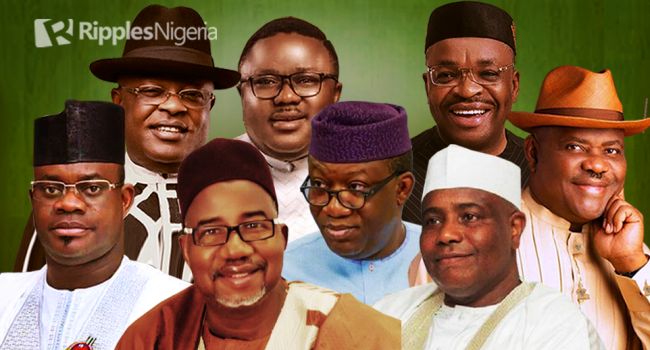 Ranking Nigerian Governors, a special monthly publication from Ripples Nigeria dedicated to the review of the performance of Nigerian state governors, returns for the months of April/May, 2022.

The special publication, which made its debut in August 2019, kicked off with the traditional ranking of the state chief executives on the basis of Top 5 and Bottom 5. However, with the steady decline in the performances of governors both in concrete actions and policy formulation and pronouncements, Ranking Nigerian Governors evolved a slightly different approach, though in the interim, by singling out governors considered worth mentioning, either for positives or negatives, as the case may be.

Despite the seeming general lethargy in governance by virtually every tier of government in the country and our self-imposed duty of holding governors to account, we are not unmindful that the act of governance in this part of the world could be herculean. This is so especially with dwindling resources at the disposal of government, as well as increasing insecurity occasioned by terrorism, banditry and other violent crimes in virtually every part of the country.

It is, however, a stubborn fact that Nigeria, with its God-given natural resources and huge and intimidating human assets, visionary and forward-looking leaders should not have too many problems making things work.

Unfortunately, governance and prudent management of resources have been abysmally low and near-zero despite the huge possibilities and citizens’ high expectations for development.

For the months under review, April/May, 2022, we take a look at some state chief executives, their actions, pronouncements, gaffes and the effects on the people they govern.

There is no doubt that the race towards the 2023 general elections is approaching its first peak with the fast-approaching party primaries. And as usual, politicians, including state governors, are racing against time to outdo one another.

In several states of the federation, governance has taken the back seat as governors concentrate fully on the politics of 2023.

The situation, we have observed, is worse in states where the governors have declared their ambition to run for the presidency. These include Ekiti, Akwa Ibom, Ebonyi, Rivers, Sokoto, Bauchi, Kogi, Cross River.

For these state governors, Kayode Fayemi, Udom Emmanuel, David Umahi, Nyesom Wike, Aminu Tambuwal, Bala Mohammed, Yahaya Bello and Ben Ayade, their dream of becoming president in 2023 is much more of greater priority than providing the needed leadership and governance for their states.

Though we acknowledge the right of these governors to aspire to higher office, especially if it is for the good of the common man, we, however, frown at the way most of the state helmsmen are going about it at the expense of their current responsibilities to the people.

We are alarmed that as the states of the federation and the nation as a whole continue on a negative autopilot mode, Nigerians continue to be at the receiving end of insecurity, worsening poverty, sectarian violence, uncertainties in many areas of our national life, including doomsday permutations around the 2023 general elections, while those elected to provide leadership and secure their lives and property care less, electing to focus on who occupies what office come 2023.

Deborah Samuel and the cowardly politics of silence

We note the disturbing silence of many state governors, especially those of the Southern states, who have hitherto been vociferous in speaking out against the insecurity in the country, on the unfortunate cold-blooded murder of Deborah Samuel, a student of the Shehu Shagari College of Education, Sokoto, who was stoned to death and burnt on the allegation of committing blasphemy against Prophet Mohammed.

We note that these formerly outspoken governors and their counterparts in the Northern part of the country, who are presidential aspirants, chose to remain silent, ignore the heinous crime and barbaric murder of a young lady just as to be politically correct and safeguard their chances of winning the presidential ticket of their various parties.

It is our belief that such deafening silence of major political players in the face of the many calamities in the country, especially governors, is the height of betrayal against the vulnerable in society, a gross abandonment of the same people that put them in office.

The huge cost of the aspiration of these governors is another cause for concern to many.

From the humongous amounts paid for expression of interest and nomination forms (N100 million for APC and N40 million for PDP), to the cost of junketing across the country, from state to state, most times in chattered jets and with a retinue of aides and political hanger-ons, there is no doubt that the treasury of many states is beginning to bleed terribly.

We note that many of the governors with presidential ambition may argue that they used their personal resources to procure the forms or that some faceless groups and associates procured them, but is doubtful if the same can be said about the cost of ferrying aides and political hanger-ons across the country. These costs also include honorarium for the host delegates and leaders in the various states.

We submit that to forestall these anomalies, relegation of governance and unnecessary bleeding of state resources, our laws, including the Electoral Act must be amended to provide for a greater role for deputy governors so as to take charge of the states while their principals are occupied with politicking. There must also be a clear legislation on sources of pre-primary election funding and a statutory cap on cost of expression of interest and nomination forms that can be charged by political parties in the country.

As it stands, the months of April and May, 2022, may go down in history as the least in terms of performance by Nigerian governors in the current governance cycle!