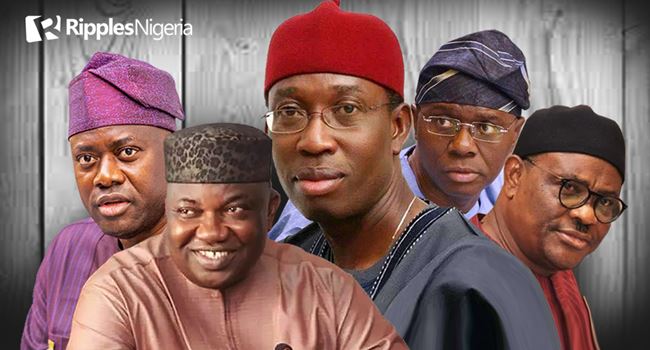 Ranking Nigerian Governors, a major feature of Ripples Nigeria, has been running for over two years. It is a platform through which this medium strives to hold elected leaders, specifically at the State level, accountable and measure the impact of their administration on the lives of Nigerians on a monthly basis.

Despite the strict parameters we have set for ourselves, we are constantly reminded of the many challenges of governance in this part of the world.

These huddles include fast-dwindling resources, worsening insecurity, and constitutionally imposed limitations on the governors’ powers.

Despite the challenges, Nigeria is richly endowed with abundant human and natural resources and deserves to rub shoulder with the advanced countries of the world in terms of development.

It is our belief that with good leadership, Nigeria would not be in its current parlous state.

In March, the challenges in governance in Nigeria became more pronounced with the worsening insecurity in several States in the country.

We observed to our chagrin that the country was sliding towards anarchy at an alarming rate, with governors of Kaduna and South-East states, particularly, guilty of poor performance in the discharge of their responsibilities as chief security officers of the various states.

For the months of April and May, a major deviation was made in the traditional Top Five, Bottom Five template due largely to changing dynamics in the country’s political space.

In what has been considered a radical development, the Southern part of the country woke up from what seemed a prolonged slumber to insist on an end to open grazing, insecurity, and lopsided appointments by President Muhammadu Buhari.

In June, the governors rallied once again in Lagos to concretize their earlier position, strengthened by their unmistakable resolve to assert themselves as chief security officers of their States, while demanding that the Federal Government must intimate them before undertaking any security operations in their domains.

This is particularly significant given the fact that the gathering was populated by governors from different political leanings but united in seeking respect for rule of law and constitutionalism.

In their far reaching resolutions, the governors also demanded State police, decried selective administration of criminal justice and set a September 1 deadline for the promulgation of the anti-grazing law in States in the Southern part of Nigeria.

The recent moves, no doubt, are helping to alter Nigeria’s political matrix which outcomes have the potential to launch the country into a more stable and progressive polity.

We acknowledge though that the southern governors have not totally acquitted themselves in terms of quality of governance and hereby challenge this privileged club to sustain the push towards a better society.

We also applaud the Southern governors‘ rejection of the National Assembly conditional approval of electronic transmission of election results, and confirmation of exclusive jurisdiction in pre-election matters on the Federal High Court, as they resonate with the mood of a large number of Nigerians who desire a clear departure from the flawed electoral processes in the country.

We note that with their current disposition on major national issues, there is the possibility of a gradual restoration of confidence in governance with its attendant implications for leadership-followership relationship.

Indeed, we consider it refreshing that the governors, as peers, are increasingly finding their voices and speaking truth to power, and at the same time sharpening the peer review mechanisms.

We reckon that the unmistakable stand of the governors would be a wake-up call for the Buhari-led administration to appreciate that things cannot continue the same way.

We admire the courage of the governors for demanding what ought to be and not what is.
The state helmsmen’s resolutions can only deepen the nation’s democracy and properly set the stage for a more robust engagement between states and the government at the centre.