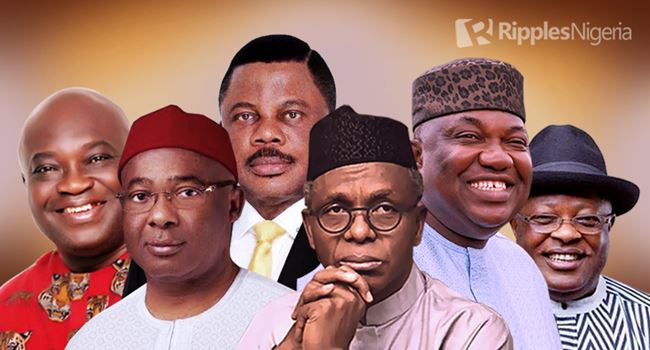 Since August 2019 when the Ripples Nigeria’s ‘Ranking Nigerian Governors’ made its debut, we have made efforts at appraising and ranking Nigerian governors based on their performance in the course of each month.

At inception, Nigerian state chief executives were ranked on the basis of ‘Top 5 and Bottom 5’, appraising their performance, not just through actions and projects carried out, but also judging the quality of their policy pronouncements, inactions and gaffes adjudged to have an impact on the quality of lives of residents of their respective states.

The foremost objective of the ranking, which has become a major offering of Ripples Nigeria, is in line with our self-imposed mandate of holding elected leaders, especially at the state level, to account, examining to what extent governance at the second-tier of government impacts on the lives and wellbeing of Nigerians in the course of the month under review.

Though we have religiously done this since 2019, we have equally remained mindful of the challenges associated with governance in this part of the world, the increasingly dwindling resources available, and the unfriendly circumstances certain extraneous realities have imposed on the nation.

Accepting that governance in a developing world has never been a child’s play, we are however quick to note that Nigeria is not just another developing country but one endowed abundantly, such that any leader worth his salt can always circumvent his way around identified odds to provide a level of succour for both citizens and residents.

In the month of January, 2021, Governor Abdulahi Ganduje stood out as our shining light on account of his stand on the issue of open grazing and movement of cattle from the Northern part of the country to the Southern part. While for February, 2021, we noted the unfortunate descent of some Nigerian governors from the heights of their office as they threw caution to the winds and engaged in trading words, which most times bordered on personal insults and abuses, calling to question their qualification for the high office they occupied. It was really a month of absurdities and unfortunate descent into the gutters by some Nigerian governors.

For the month under review, March 2021, it is saddening that no Nigerian governor could be singled out for praise or commendation, as hardly anything worthy of praise was recorded. Instead, the gradual non-impressive performance continued unabated, as Nigerians, in virtually every state of the country, continued to reel under the scourge of insecurity occasioned by the activities of bandits, insurgents and the now famous ‘unknown gunmen’.

However, in the course of the month under review, March 2021, Governor Nasir el-Rufai of Kaduna State and the Governors of the South-East states of Abia, Anambra, Enugu, Imo and Ebonyi, embodied the failure of governance, in our estimation, as they appeared to have grossly failed in their primary responsibility of providing security of lives and property of the people they were elected to lead.

For Kaduna State, Nasir el-Rufai’s insistence on non-negotiation with bandits and kidnappers freely operating in his state effectively put scores of victims of banditry and mass abduction in harm’s way. It is even more perplexing that el-Rufai, who once told the world that he had to pay bandits a princely sum to keep them away from terrorising residents of the state, suddenly decided to look the other way when it mattered most.

We are tempted to believe that the recent hardline posture of the governor has succeeded in worsening the situation of many victims of abduction in Kaduna State, especially the students of the Federal College of Forestry, most of whom are still in the custody of their abductors for more than a month now.

It is our belief that if the governor had for the sake of the innocent students and the trauma their parents have been going through, soft-pedaled and adopted a middle of the road approach, all the students may by now be back home. At least, not all negotiations, according to cases in Katsina and Zamfara, lead to payment of ransom, as we have been made to understand.

It is also so tragic to learn of the murder of three students of Greenfield University by their abductors. There is no greater proof of betrayal of the people by their government than the lifeless bodies of innocent Nigerians.

The hardline posture of Governor el-Rufai, we dare say, has practically turned his Commissioner for Internal Security and Home Affairs to the Commissioner of Bad News and Doom!

For the governors of the South-East, we note with consternation, the current rising spate of insecurity occasioned by attacks on security agencies, especially police formations and personnel in virtually all the states in the region.

Though we acknowledge that the governors may have been handicapped in responding appropriately to the current crisis due their limited position as chief security officers of their respective states, we are also mindful of the fact that the governors have largely been divided along party lines and unable to jointly, as expected, respond appropriately. For them, partisan politics appears more important than the safety of their people. This, no doubt, contributed to the level of insecurity in the region.

It is our belief that there must be a limit to partisan politics, especially when security is concerned, just as the governors of the South-West pushed aside their party differences to come up with South-West Security Network, more widely known as Amotekun.