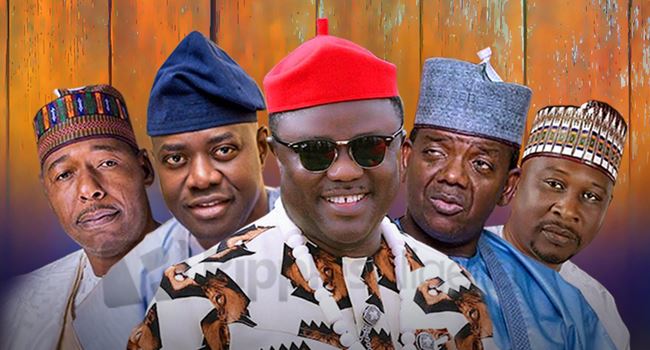 These series of publications started in August, 2019, and will continue to run through the lifetime of this platform. For November 2019, we again present a ranking of Nigerian governors, highlighting Top 5 and Bottom 5, in no particular order.

The Zamfara State Governor, Muhammed Bello Matawalle, again gets Ripples Nigeria mention in the Top 5 ranking of governors in the country.

We take note of his efforts at managing the cost of governance, particularly the recent signing into law of a bill by the Zamfara State House of Assembly to revoke the life pension and other advantages conferred on past Governors, Deputy Governors, Speaker and Deputy Speaker in the state.

Though the new law has been perceived as hasty, and supposedly an outcome of the face-off with his immediate predecessor, what must be admitted is the endemic abuse of office and reign of impunity visited on States by past governors through legislation of humongous post-service benefits designed for themselves and family members.

We acknowledge that the action of the governor would save the state huge sums of money that could be channeled to meet the basic needs of the people of the state, instead of spending it on a few privileged people in the society who already fed fat on the commonwealth of the people.

Indeed, we recommend the Matawalle initiative to his peers, both at the State and  national levels, so that ordinary hard working Nigerians don’t continue to feel slighted by the jumbo pay ex- office holders, including members of the National Assembly, continue to enjoy at the end of their tenures.

Prof. Ben Ayade of Cross River State made it to the Top 5 for the first time on account of the State’s 2020 budget proposal to the State House of Assembly.

The governor, with a budget of N1.1 trillion, second only to Lagos State, dedicated more than 80 percent of the 2020 budget to capital expenditures.

We share the belief that the budget holds the promise of rapid infrastructure development and renewal in the state, only if it is faithfully implemented. Ayade’s bold move is better appreciated against the fact that even the Federal Government could merely manage just about 25 percent of the federal budget on capital expenditure.

Despite receiving our nod in November, we continue to condemn in strongest terms the way the governor has managed opposition voices in the State. We recall that his Bottom 5 ranking in September was largely due to the alleged persecution of dissenting voices against his administration, as represented by the travails of Journalist, Agba Jalingo and a lawyer, Joseph Odok.

Governor Seyi Makinde, the Oyo State governor, again made it to the Top 5 governors in the country for taking concrete steps in combatting the menace of corruption in his state and by extension, the country.

We recognize that with the prompt signing of a bill establishing the Oyo State Anti-corruption agency, the battle against wanton stealing from the public purse has become institutionalized.

This is even as we believe that the domestication of the law establishing anti-corruption agencies such as the Economic and Financial Crimes Commission (EFCC) and the Independent Corrupt and other related offences Commission (ICPC) is an indirect call to action on other state actors to do the needful.

We counsel Makinde to resist any temptation to turn the Oyo State anti-corruption agency into a tool for the oppression and witch-hunting of perceived political enemies.

Fintiri joins the elite class on account of his daring move to abolish the office of Deputy Permanent Secretary in the state’s civil service, believing it to be another measure in managing the cost of governance.

We share the widely held view that one of the banes of mis-governance in Nigeria is the creation and sustenance of needless offices to prop political patronage in complete disregard for probity and professionalism.

We challenge the Fintiri administration to query the entire civil service spectrum with a view to overhauling the system, fishing out dead woods and institutionalizing a culture of good governance across every strata of the public service.

If well delivered, the Adamawa template could become a reference point for peers who have surrounded themselves with a bloated workforce that has become unmanageable and a drag on progress.

Governor Zulum retains our assessment of him as a man in a hurry to impact his environment. And, we note his persistent and cautious moves to negotiate an end to the Boko Haram insurgency.

We acknowledge the tenacity with which Zulum has attacked the insurgency challenge , especially the recent recruitment of about 1,500 hunters from neighbouring Cameroon to fight the terrorist.

Though we recognize that this may be a tough call, we nonetheless see value in the role this band of men could play in intelligence gathering. No doubt, the Northeastern state of Borno has been the most hit, in the over-a-decade old Boko Haram insurgency, a situation that has made the state lay prostrate for years.

We acknowledge that Zulum’s robust response to security challenges in his domain is capable of shaking off the lethargy sometimes witnessed in the prosecution of the Boko Haram war by Nigeria’s military.

The governor of Kogi State, Yahaya Bello, again, makes the Bottom 5 governors in Nigeria, a position he has maintained since the beginning of the special publications.

While we acknowledge the pronouncements of the Independent National Electoral Commission (INEC) in the November 16 governorship election in Kogi, we are, however, concerned with the widespread reported violence that characterised the election.

The incidents, attested to by local and foreign observers, cast a huge question mark on the integrity of the poll, and Bello’s victory.

We are also amazed that just days after being pronounced winner of the governorship contest, Bello declared that the state government was not owing workers in the state ‘a dime.’

We dare argue that such denials paint the Kogi helmsman as one who reckons that integrity is a commodity that can be priced lowly for political gains.

Governor Nyesom Wike of Rivers State makes his first appearance on the ranking chart at the bottom, and the reasons are not far fetched.

While we accord him some recognition for a few positive things attributed to his administration, especially in the area of infrastructure development, we find it awkward that six months after being sworn-in for a second term in office, he had given no heed to calls to perform the constitutional task of establishing a cabinet.

Though this has been blamed on so-called politics within the Peoples Democratic Party (PDP), we regard the excuse as untenable. Wike’s disregard for laid down rules risks a descent into absolutism. If unchecked, the act could have corruptive tendencies, and as they say, absolute power corrupts absolutely.

We hate to imagine that Wike would end the year without a cabinet formally constituted.

Govermor of Ogun State, Dapo Abiodun, just like his Rivers State counterpart, Nyesom Wike, is making the list for the first time in the Bottom 5.

He also gets a mention for his refusal to constitute a cabinet six months after inauguration. As we have argued elsewhere, the act is unhealthy for the growth and development of Nigeria’s democracy.

We reckon that, after so much enthusiasm that greeted his victory, his inability to name a cabinet six months after speaks volume on his preparedness and capacity to harness the resources of the State toward sustainable development.

We are also afraid that such disposition could signal an early romance with autocratic rule which may jeopardize the establishment of popular will as the basis for good governance.

Enugu State Governor, Ifeanyi Ugwuanyi, gets a Bottom 5 mention for the rising spate of kidnappings in the state.

We note the fact that Enugu State appears to have become the most fertile ground for kidnappers in the country, with Catholic priests the most targeted.

At the last count, eight Catholic priests had been kidnapped in the state, with the state government under Ugwuanyi seemingly handicapped in handling the situation.

Ugwuanyi may do well to pick up the gauntlet or have his accomplishments continuously overshadowed by insecurity concerns, a major draw back for meaningful development and growth.

Governor Udom Emmanuel makes the Bottom 5 for allegedly instigating the recent arrest and detention of a banker accused of criticising him.

The staff of Prudential Microfinance Bank, Uyo, Akwa Ibom state, Mr Itok, was arrested, and arraigned in court for allegedly posting materials on his Facebook page considered damaging to Governor Udom Emmanuel and other staff of the Akwa Ibom State Government House.

Itok, said to have been picked up over a month ago, was arraigned only recently before a magistrate court in Uyo, the state capital by the Department of State Services (DSS).

We consider the travails of citizen Itok as a show of intolerance on the part of Udom and, therefore, frown at any attempt to stifle freedom of speech and abridge the fundamental rights of Nigerians. We also deplore the alleged use of blackmail and intimidation by Udom to settle scores with perceived enemies.