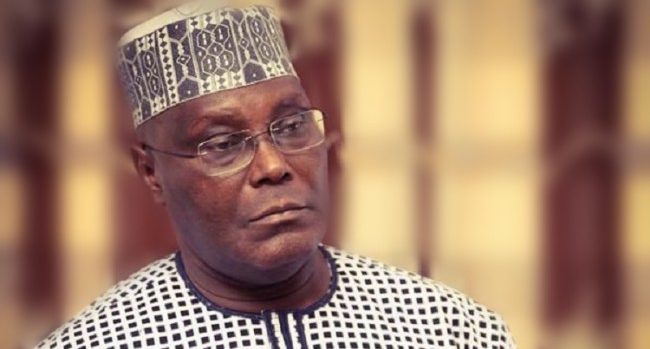 It was gathered that the private jet conveying Atiku from Dubai landed at the Nnamdi Azikiwe International Airport, Abuja, at 1:30am and was met by waiting security operatives.

The security team was reportedly made up of DSS operatives, officers of the Nigerian Immigration Service and Nigeria Customs Service.

The operatives were said to have carried out a search of the plane.

Confirming the development via his Twitter handle, Abubakar said the search was aimed at intimidating him.

“I arrived to Abuja this morning to a search by agents of the state, aimed at intimidating me and my staff,” he wrote.

“I am committed to building a Nigeria where no citizen is intimidated by agents of state who are paid to protect them.”

“The claim by @atiku is a mischievous attempt to grab the headlines. Nigerians need to know that one of the resolutions of the Atiku team at their recently-concluded Dubai retreat was to embark on scaremongering. This is one of such.

“For the records, all incoming passengers on international flights go through customs, Immigration, health and security screening.

“Where the aircraft is using the private, charter wing, as the PDP Candidate did, such arrivals are met by a team of the Immìgration, customs and other security agencies.

“They go to the arriving aircraft as a team. The airport authorities confirm that this is a routine process, applying to all international arrivals, including Ministers, unless the passenger is the President of Nigeria.

“It is also important to state that even in the Presidential Wing of the airport which the President of Nigeria uses, there is the presence of Immigration and other security officials who must stamp his or her passport on arrival.

“By standard procedure, all aircraft on international arrivals must first of all park at the international wing of the aircraft. They can move to the domestic terminal only upon the completion of the arrival processes.

“Law-abiding citizens are encouraged to respect the laws of the country and our VIPs should not seek to be treated over and above the citizens they wish to serve”.

There have also been other reactions.

Former Ekiti State governor and fierce critic of President Muhammadu Buhari, Ayodele Fayose, stated in a Twitter post that, “when dictatorship is closer to its inglorious end, it employs all tactics including, the most absurd. Subjecting a former VP of Nigeria to all manners of embarrassment at the Airport just because he is now the candidate of the @OfficialPDPNig is not unexpected. His (Buhari’s) time is up!”

Senator Ben Murray Bruce who raised the allegation in an early tweet had said:

“I totally condemn this reckless harassment of @atiku the candidate of the @OfficialPDPNig as he landed in Abuja. Nigeria is not a fascist state. We will not return to a jackboot dictatorship. This government should face Atiku at the polls, not with force.”

Meanwhile, Timi Frank, ex-deputy spokesman of the All Progressives Congress (APC), says there was a plot to plant foreign currencies in Atiku’s private jet.

Frank alleged that a special squad deployed by the presidency conducted the search with recording devices.

He said the search lasted for hours and the squad was “disappointed” when they could not find anything implicating.

“Due to information at our disposal, I have been saying it that the PDP presidential candidate is not safe under this administration because the Buhari’s administration is deploying all manners of devilish strategies to nail all the opposition leaders especially, Alhaji Atiku Abubakar,” the statement read.

“We are using this medium to inform the international community to also take note of how Buhari administration is intimidating the opposition presidential candidate, Atiku Abubakar, who has served Nigeria as vice-president for eight years.”

Frank described the alleged plot as a “desperation to nail him”.