Home » Graffiti » Real reason why Wilder lost to Fury? A lesson to us all 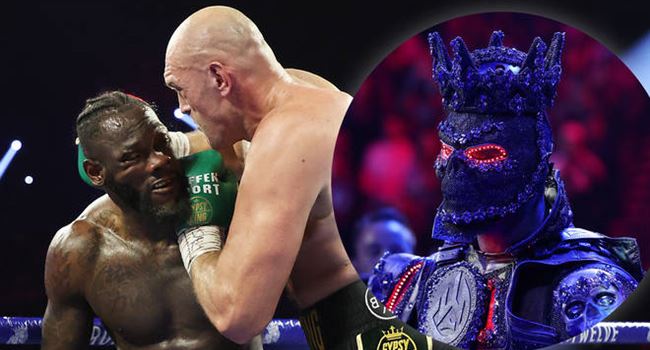 Deontay Wilder’s reason for losing to Tyson Fury is a common thing among professionals. Some of us may laugh at it, but it actually happens to the best of us.

The 34-year-old American, who lost his WBC title in the fight, said the costume he wore to the ring was so heavy on him that he couldn’t feel his legs during the fight.

He said he wore the costume, which weighed about 18kg, as a tribute to Black History Month.

He wanted to wear something in dedication to his entire race, whereas his opponent Fury was simply carried to the ring in a throne, wearing a crown as the Gypsy King he calls himself.

See, the weight of Wilder’s costume isn’t the real problem here, but that he made such an unnecessary thing as a costume come in the way of his mental preparation for the fight.

“I wanted it to be good and I guess I put that before anything else,” said Wilder, who admitted he had worn the costume only once before the match.

Once, in my early days, I prepared for a speaking engagement worrying more about what to wear than what to say. And of course, it turned out a disaster.

This can happen to the best of teachers and speakers!

When one considers himself more important (caring too much about how he is perceived) than the mission he has at hand to accomplish, that little misplacement of priority could just make him a big mess out of him.

I’ve also attended a wedding where the bride – a seemingly well-educated lady – stammered repeatedly while reciting her vows along with the priest. The congregation kept wondering what the issue was until she finally cried out that her gown is making her very uncomfortable.

These examples may not directly relate to Wilder’s situation, but of a truth, the American knows what he is saying. He said he couldn’t feel his legs during the fight. In other words, a man known to be the greatest puncher in the heavyweight division lost a fight even before it started.

It’s therefore safe to conclude that Wilder’s eagerness to show the world what his ring-walk costume represented, was – erroneously assumed by his inner being to be – the main objective of the night. And after achieving that, inner being went to sleep.

So, in all you set out to do, and in all your outings, don’t let your priorities be misplaced.

Whenever you want to achieve something, keep your eyes open, concentrate and make sure you know exactly what it is you want.

No one can hit their target with their eyes closed by irrelevant things. It was Paolo Coelho who said this.

By the way, Wilder wants a third fight with Fury. May he learn from his mistakes of last Sunday and successfully regain his WBC belt, because truly, he’s the better of the two fighters!

The stats say so! And the entire world of boxing named him the favourite before the fight.