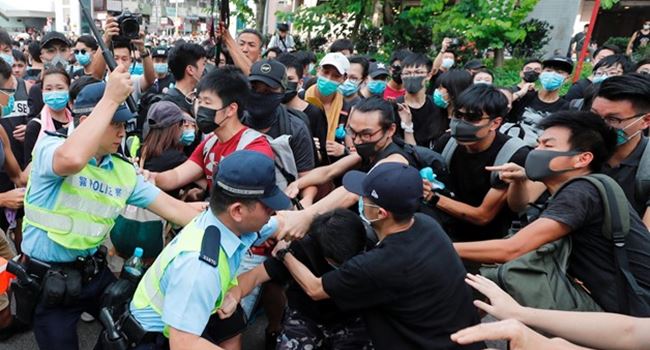 Hong Kong has fallen into recession following the five months anti-government protests that erupted in flames at the weekend.

This recession is unlikely to achieve any growth this year, the city’s Financial Secretary said

Police fired 88 volleys of tear gas and 27 rubber bullets on Sunday, they said.

“The blow (from the protests) to our economy is comprehensive,” Paul Chan said in a blog post, adding that a preliminary estimate for third-quarter GDP on Thursday would show two successive quarters of contraction – the technical definition of a recession.

He also said it would be “extremely difficult” to achieve the government’s pre-protest forecast of 0-1 % annual economic growth. The rallying cry of Sunday’s protests was to fight perceived police brutality and defend Muslims and journalists.

Hong Kong Free Press, an online news service, called for the release of a freelance photographer arrested on Sunday. The city’s Foreign Correspondents’ Club condemned the arrest in a statement on Monday calling for an independent investigation into “police violence against journalists and interference with the media’s right to cover the protests under Hong Kong law.”