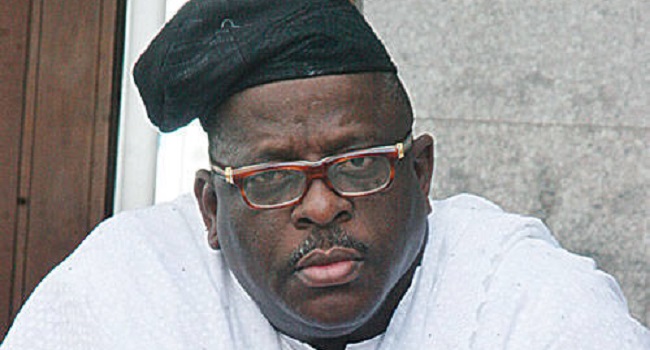 The senator who represented Ogun East in the eighth National Assembly, Buruji Kashamu has described as shameful, a claim that constituency projects were recovered from him.

The Independent Corrupt Practices Commission (ICPC) had in a statement on Thursday claimed that it recovered three ambulances and a 500KVA transformer meant for Ogun-East senatorial district from the senator.

But in a statement through his Media Aide, Austin Oniyokor, on Friday, Kashamu denied that constituency items were recovered from his office in Ijebu-Ode.

On what happened, the senator’s media aide alleged that Kashamu’s former senior legislative aide, one Onadeko Onamusi, “abused his position and influenced the award of 18 out of the 21 constituency projects to two of his (the SLA’s) companies – Stanton Nigeria Limited and Haines & Baines Nigeria Limited.”

Oniyokor explained that when Kashamu learnt of the development, he “issued a query to Onamusi and terminated his appointment. Thereafter, the matter was reported to the ICPC. The ICPC investigated the matter, arrested and charged Onamusi to court,” he said.

He went further to say: “In fact, on the 28th of November, 2018, the ICPC through its spokesperson, Mrs Rasheedat Okoduwa, issued a statement wherein it announced that it had charged Onamusi to court over N68.7million contract scam.

“In the statement, the ICPC said Onamusi was arraigned before Justice C. N. Oji of the High Court of the Federal Capital Territory, Apo, Abuja, on 18 counts.

“Onamusi was accused of using his companies to execute several contracts for the National Assembly.

‘So, for any objective mind, it should not be difficult to understand that there was no way the distribution of the items could have continued since they had become a subject of litigation and could be used as evidence. It is even more so when part of the senator’s complaint was that the contractor supplied Volvo hearse instead of supplying ambulances.

“This was the situation until Senator Kashamu served out his term of office in June, 2019. It is instructive that the items were not diverted or taken anywhere for the personal use of the senator, or any of his associates.

“So, if the matter the ICPC took to court had been determined one or the other, what it should have done was for the items to be delivered to the beneficiaries and not this unnecessary melodrama by the commission.

“The three Volvo hearse and transformer were not hidden. They have always been in the open within the expansive compound of Senator Kashamu’s Constituency office in Ijebu-Igbo. So, there could not have been any recovery.

“It is shameful that the same agency that got Onamusi arrested, investigated and charged to court over the same items could turn round to claim recovery of the items that had been reported to it on the basis of some unfounded ‘intelligence’.”