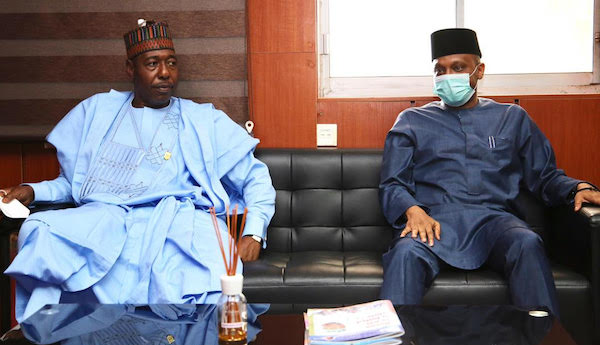 The Federal Commissioner of the National Commission for Refugees, Migrants and Internally Displaced Persons (NCFRMI), Basheer Garba Mohammed, said on Thursday the commission had commenced talks with the Borno State government on how to bring back to the state, people who fled to neighboring countries due to the Boko Haram insurgency.

Mohammed, who disclosed this to journalists shortly after a meeting with Borno State Governor, Prof Babagana Zulum, and other state government officials at the NCFRMI office in Abuja, said the commission in collaboration with the United Nations High Commissioner for Refugees (UNCHR) and other partners were working towards bringing back home those who fled Borno State and other states of the federation.

He said: “The commission will do everything possible to bring back the indigenes of Borno State from our neighboring countries in accordance with International Humanitarian Law as we seek to put everything in place for an easy reintegration and rehabilitation back to safer communities for them.

“Nigeria has the second-largest number of displaced persons in Africa and Borno State with a figure of 1.8 million displaced persons is the biggest in the country. Therefore, this means a lot to the government to bring back home the concerned persons to a life of dignity and prosperity.

According to Mohammed, President Muhammadu Buhari is deeply concerned about the general well being of Nigerians in the neighbouring countries and had directed that every Nigerian refugee should be returned home to a life of dignity in their states of origin.

The NCFRMI chief added: “Therefore, we at the commission are taking this directive seriously and have gone far in this regard, as we have already secured 50 hectares of land in about seven states where we intend to build 500 households for resettlement.

“This is part of our focal project this year. The resettlement city, which is geared towards moving away from being just food providers to the refugees and displaced persons to finding sustainable solutions to their problems by transiting them into full and dignified settlements.”

On his part, Governor Zulum commended the commission for reaching out to the state government on the matter.

He said the refugees are eager to return home.