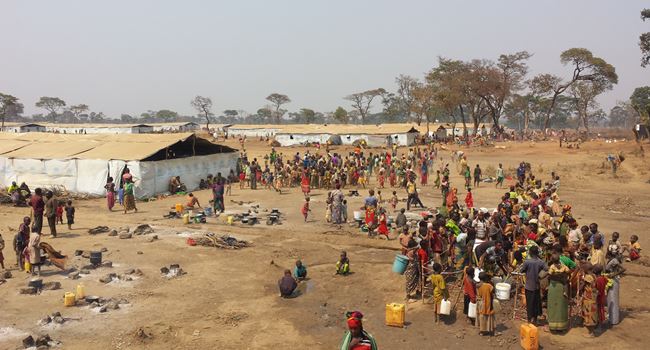 The National Commission for Refugees, Migrants, and Internally Displaced Persons, NCFRMI, has revealed that more than 2.6 million Nigerians are internally displaced within the country.

This was contained in a statement issued by the NCFRMI Commissioner, Sen. Basheer Lado, at the flag-off of distribution of relief items to 7,500 displaced persons, held at the Kano State Government House on Sunday, February 28.

According to Mr Lado, the displaced persons are spread across both the Northern and Southern parts of the country.

Speaking on the distribution of the relief items, Mr Lado said that about 7,500 displaced persons identified across 1,500 households will benefit from the gesture which includes different variety of food and non-food items.

He stated that the intervention was due to the alarming rate of displacements across Nigeria.

According to him, President Muhammadu Buhari has continued to support the Commission towards supporting the displaced population across the country, stressing that “we as a Commission will continue to work assiduously in this regard”.

“To this end, in addition to the distribution of food and non-food items to all displaced persons here present today, the Commission will soon launch Project Reliance and the Resettlement City Project in Kano towards the empowerment and resettlement of displaced persons,” he added.

Furthermore, he disclosed that the NCFRMI would build housing units to accommodate those who have lost their homes in Kano.

“The President of the Federal Republic of Nigeria, His Excellency Muhammadu Buhari GCFR, has been tremendously supportive of the keystone projects of the Commission, especially as it relates to the empowerment and resettlement of displaced persons across the country.

He also thanked Governor Abdullahi Ganduje for his contribution of 20 hectares of land to the Commission to fast-track the construction of the 600 household Resettlement City estates which, according to him, have already reached advanced stages in Borno, Katsina, Zamfara, and Edo states.

Fani-Kayode dares Gov Matawalle to name, shame those behind abductions