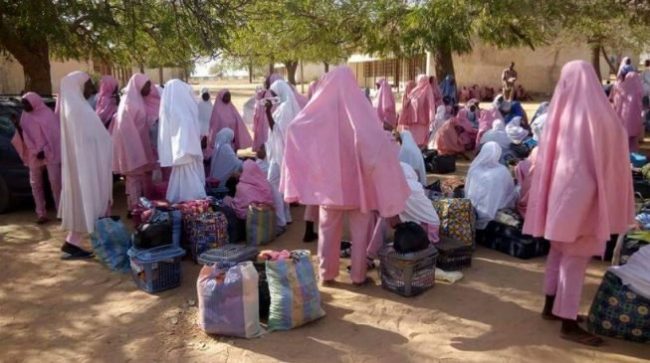 The 105 girls released by Boko Haram have been flown from Maiduguri, the Borno State capital, to Abuja.

They were airlifted from the Maiduguri Air Force base in a flight expected to last one hour. Their flight left the Borno capital at about 6:40 p.m.

The presidency confirmed the news via twitter on Wednesday evening, thus, “The freed girls have been airlifted to Abuja aboard a military transport plane”.

The girls, kidnapped in February, were released on Wednesday morning.

A total of 104 Dapchi schoolgirls, another abducted girl and a boy were released Wednesday, officials confirmed.

With the development, the fate of the six remaining girls is yet to be ascertained even as there are reports that some of them may have died in captivity.

Also, one of the abducted girls, Liya Sharubu, was said to have been held back for refusing to denounce her Christian faith.

Journalists were barred from talking to the girls or taking their pictures. They were first transported from Dapchi to Damaturu, the Yobe State capital. From there, they travelled by road to Maiduguri, the Borno State capital under military protection.

They are expected to be hosted by President Muhammadu Buhari when they arrive Abuja.