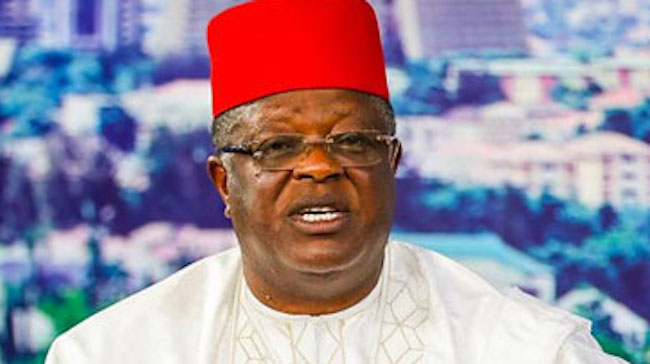 In apparent defence of the health of the presidential candidate of All Progressives Congress (APC), Bola Ahmed Tinubu, Governor David Umahi of Ebonyi state has advised Nigerians to pay attention to what is tangible as far as 2023 race is concerned.

Tinubu’s absence from the recent signing of Peace Accord in Abuja heightened tensions around the fitness of the former Lagos State Governor.

A number of Nigerians had criticized the national leader for absenting himself from such an important development and many others, accusing him of avoiding to speak to the public.

They had also argued that Tinubu would not be physically alert to take up the herculean task of administering Nigeria for the next eight years.

However, in a video posted on his microblogging site on Sunday, Tinubu dismissed reports around his health, adding he was physically ready to administer Nigeria.

The APC presidential candidate also described as false the claim that he had withdrawn from the 2023 presidential race.

Umahi, who spoke on the issue in a Channels Television Programme, Sunrise Daily, on Monday, defended Tinubu’s fitness.

He noted that the former Lagos State Governor was hale and hearty and needed no proof of life.

He further urged Nigerians to be more concerned about the capacity of the APC candidate to deliver, not about insignificant emphasis on his health.

“Nigerians are so petty. Asiwaju has a life. So he doesn’t need any proof of life. The truth is, nobody is completely well. The issue around his health shouldn’t be a concern. People talking about his health don’t even know what might happen to them tomorrow. Instead Nigerians should concentrate on the tangible.

On the commencement of APC campaign activities, Umahi said the ruling party “was a bank and would mobilize and reach out to Nigerians in due course.”

“The first to start doesn’t translate to the first to finish. I can tell you APC is preparing and we’ll start the activities in due course.”

The Governor also berated the Peoples Democratic Party in Ebonyi State, adding that the opposition was inconsequential.