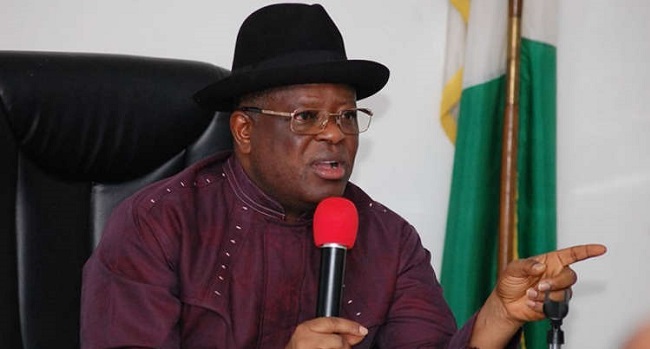 The minority caucus leader of the House of Representatives has condemned an alleged raid on the residence of Ebonyi State Governor David Umahi in Abuja.

The residence of Umahi, the South-East Governors’ Forum chairman in Abuja was purportedly raided recently by policemen.

In a statement on Tuesday by the minority leader of the house, Ndudi Elumelu, the caucus described the alleged raid as an alarming and inexcusable development.

“We received with angst and rude shock the report of the illegal raid on the Abuja residence of the Governor of Ebonyi State and Chairman of the South-East Governors Forum, Chief Dave Umahi, by police officers reportedly from the Criminal Investigation Department (CID) of the Federal Capital Territory Command led by a commissioner of police.

“Whereas no one is above the law, we find the needless forced entry into the governor’s residence, the needless breaking of doors, scaling offences, switching off of lights and the CCTV system as well as all acts of intimidation associated with the raid rather menacing, inexcusable, and anti-democratic.

“The fact that the police high command, including the Office of the Inspector-General of Police, has distanced itself from the operation makes it very suspect and a clear rogue operation,” the statement read.

READ ALSO: 2020 budget will be ready in December, Gbajabiamila says

Noting that the law enforcement agencies were at liberty to do their lawful job, the caucus said it was worrisome that police authorities had distanced themselves from the operation.

It, therefore, called for a thorough probe of the alleged raid.