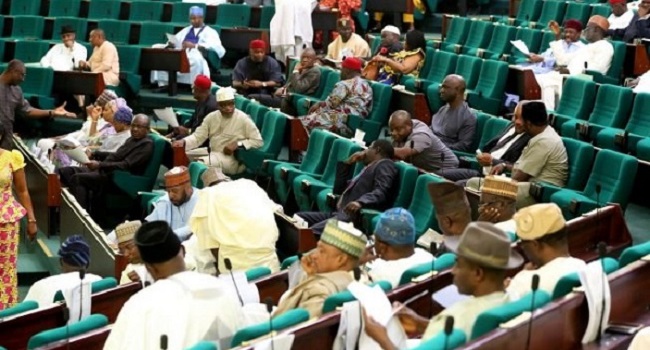 The House of Representatives at its plenary on Tuesday cried out over possible Ebola virus crisis in Nigeria.

To forestall such, the federal lawmakers called on the Federal Government to ensure proper checks were carried out at the airports, seaports and land borders.

The Reps members also urged the government to immortalise the late Dr Stella Adadevoh, “for sacrificing her life” to ensure the Ebola virus did not spread from her hospital in Lagos State to other parts of Nigeria in 2014.

The lawmakers suggested that the Federal Government should name a public health institution after Adadevoh.

The lawmakers at the plenary adopted two separate motions on Ebola.

The first motion on Ebola was moved by Paschal Obi and entitled, “Looming Re-occurrence of Ebola Crisis in Nigeria.”

Adopting the motion, the lawmakers drummed on the need for the Federal Ministry of Health to “deploy necessary materials and personnel at the airports, seaports and land borders for carrying out screening exercise on passengers.”

It also said that it was necessary that the Federal Government set aside funds for the management of Ebola virus in the event of its re-occurrence in Nigeria, while mandating the committees on Health Care Services and Health Institutions to ensure that relevant agencies take precautionary measures to avert the re-occurrence of the Ebola disease in Nigeria.

“The House commends the Federal Government for its efforts in tackling the menace of the Ebola disease in 2014, notwithstanding the ravaging force it came with. Given the proximity of the Democratic Republic of Congo to Nigeria and other West Africa countries, if necessary measures are not put in place to prevent the reoccurrence of the pandemic in a densely populated country like Nigeria, the impact may worsen and become difficult to curb.

The second motion on similar subject was moved by Moshood Akiolu and entitled, “Immortalisation of Dr Stella Ameyo Adadevoh.”

After observing a minute silence in memory of Adadevoh, her medical team and all Nigerians who died from the Ebola virus, the House called on President Muhammadu Buhari to “recognise the heroic acts of patriotism of Dr Stella Ameyo Adadevoh and her medical team and confer a befitting posthumous national honour on her.”

It added that the Federal Ministry of Health should “assess and certify Nigeria’s emergency preparedness against unexpected epidemics.”

Among other things, Akiolu had said while moving the motion, “Nigeria’s health sector was not fully prepared for the Ebola virus, hence, Dr Adadevoh and members of her medical team had to make do with the resources available to them, and in the process were exposed to and eventually died from the virus.

“The House appreciates Dr Adadevoh’s bravery and professionalism, which saved Nigeria from the devastating impact of an uncontrolled outbreak of the Ebola virus and, thus, prompted the government, good-spirited individuals and organisations, and the international community to deploy resources to curb the outbreak of Ebola virus.

READ ALSO: Senate confirms 15 for NDDC board, speaks on ‘bad image’ of commission

“Dr Adadevoh had been consistent in her acts of patriotism even before the Ebola incidence, as in 2012, she was the first doctor to issue an alert to the Federal Ministry of Health on the need to take proactive steps when the HINI (Swine flu) spread to Lagos, an action that contributed to averting an outbreak of the flu.

“The House is concerned that failure to give due recognition to the heroic acts of Dr Adadevoh could dampen the spirit of patriotism among Nigerians, especially health care workers, and possibly deter others from making sacrifices for the nation.”