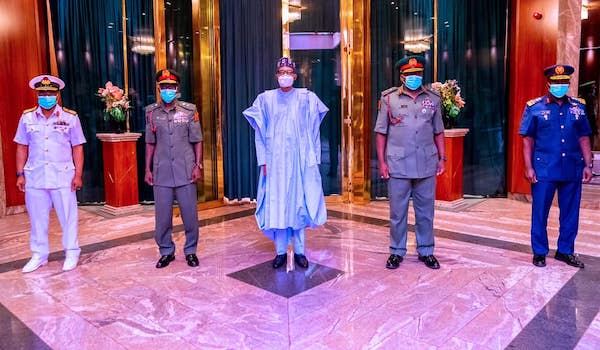 The new Service Chiefs recently appointed by President Muhammadu Buhari will be screened for confirmation by the House of Representatives on Wednesday.

According to the Chairman of the House Committee on Defence, Babajimi Benson, the Service Chiefs will be screened behind closed doors for security reasons.

They were nominated by the President to replace the former Service Chiefs including Chief of Defence Staff, General Abayomi Olonisakin; Chief of Army Staff, Lt-Gen. Tukur Buratai; Chief of Naval Staff, Vice Admiral Ibok Ekwe Ibas; and Chief of Air Staff, Air Marshal Sadique Abubakar, who all resigned on January 26.

In a letter sent to the Senate and the House, dated January 27, Buhari had urged the National Assembly to confirm the new Service Chiefs.

Speaker of the House, Femi Gbajabiamila, also confirmed receipt of the letter on February 5, which he read to the members before going ahead to set up as panel made up of Chairmen, Deputy Chairmen and some members of military-related standing committees, to be led by Benson.

“The screening of the new Service Chiefs will hold on Wednesday at 10am,” Benson said while confirming the upcoming screening.

“You know that for security issues, you don’t want to put information out there that the enemy will use against us. We will make some opening remarks but the main ‘question and answer’ session would be behind closed doors.

“Nigerians should rest assure that we have moved (and adopted) several motions on insecurity and those resolutions are uppermost in our mind. We want safety and security to return to our national life. We are mindful of all that,” he added.