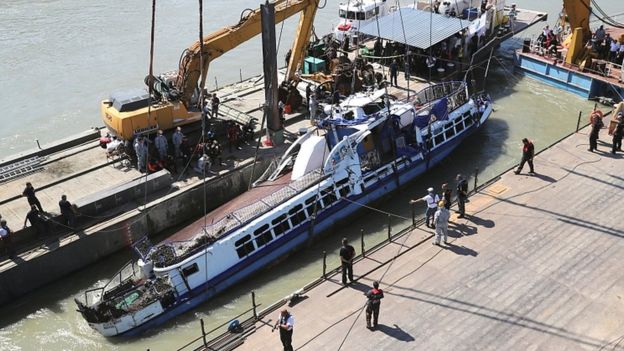 Several bodies were recovered from the wreckage of a tour boat that sank in the Danube River as it was lifted out of the river Tuesday morning in the Hungarian capital.

BBC reported that barges and rescue personnel were working early in the morning at Budapest’s Margit Bridge, where the Hableany sightseeing boat sank May 29 after colliding with a much larger cruise ship.

Read also: U.S. and Russian Ships in near collision in Philippine sea

Nineteen South Korean tourists and a Hungarian crewman have previously been confirmed dead, with eight people still missing. Seven people were rescued after the night time collision amid heavy rain.

The captain of the other ship in the collision, the Viking Sigyn, has been under arrest since June 1, suspected of endangering water transport leading to a deadly mass accident.