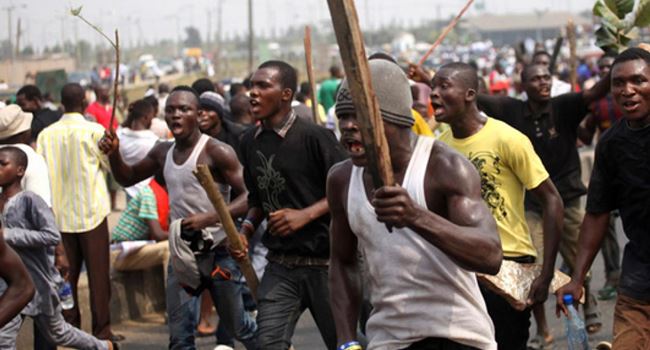 An angry mob on Tuesday went on the rampage in Sokoto State and attacked a police division in Kware local government area of the state, lynching a kidnap suspect and setting ablaze the station and patrol vans.

The state police spokesman, Abubakar Sanusi, who confirmed the incident in a statement made available to Ripples Nigeria, said the incident led to the “death of one person, while the station, the DPO’s car and two vehicles were set on fire.”

“On Tuesday, 27th April 2021, at about 0550hrs, distress call was received from the resident of Kainuwa village via Kware Local Government Area that some hoodlums entered their village and robbed one Alhaji Aminu Ibrahim.

“The villagers followed the footsteps of the suspects. On reaching one village called Bela, they started beating people on sight and arrested six suspects from the village. Later, the police was called from Kware Division.

“The DPO instantly mobilised men to the scene and took over the six suspected hoodlums.

“On their way back to the station, the villagers already made calls all over the area and the angry mob, who are predominantly residents of Kware local government area, attacked the DPO, burning tires and demanded the suspects to be handed over in order to lynch them.

“In an attempt to repel the mob action, the Divisional Police Headquarters and one suspect were set ablaze by the angry mob that also burnt down police vehicles, including that of the DPO.

“Reinforcement was sent to Kware to unravel the circumstances that led to the unfortunate incident.

“Thereafter, a delegation was led by the Commissioner of Police, Kamaldeen Okunlola, for an on-the-spot assessment of the unwarranted act of mayhem caused by residents of Kware local government area”, the statement reads.