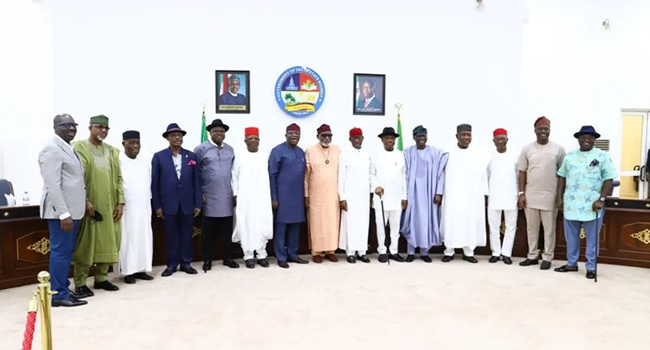 Governors of the Southern States of Nigeria put aside their political affiliations and met in Asaba, Delta State, on Tuesday, May 11, 2021. They rose from the meeting with far reaching decisions on “the current security situation, agitations/restructuring” in the country. In a 12-paragraph communique, the Governors, among other things, “agreed that the progress of the nation requires that urgent and bold steps be taken to restructure the Nigerian Federation leading to the evolution of state police, review of revenue allocation formula in favour of the sub-national governments and creation of other institutions which legitimately advance our commitment to and practice of true federalism”. These demands are now referred to as The Asaba Declaration.

Earlier in January 2021, Prof. George Obiozor, upon his emergence as the President General of Ohaneze Ndigbo, addressed the press in Enugu State. He called for restructuring and national dialogue. He said: “Ndigbo in all indication see resrestructuring as the most preferred option. However, whatever or whichever options others offer, what is real is that all the ethnic nationalities in Nigeria will sooner or later go into negotiations or debate over the future of Nigeria and we must be prepared”.

READ ALSO: NIGERIA: When chaos becomes the springboard for the change we need

The Asaba Declaration has generated harsh reactions from some top political leaders from the North. The President of the Nigerian Senate, Ahmed Lawal, on Thursday, May 13, kicked against the call for restructuring. Addressing State House Correspondents in Abuja, he cautioned the Southern Governors to make sure they restructure their various states first. He said: “The call for secession or the call for restructuring – are genuine calls – though I never believe that someone who is calling for secession means well or is a misguided person. But I believe that when somebody calls for improving the structure that we have, it is a genuine call. But I want to advice here, I believe that as leaders those of us who were elected must not be at the forefront of calling for this kind of thing because even if you are a Governor, you are supposed to be working hard in your state to ensure that this restructuring you are calling for at the federal level you have done it in your state as well”.

A democratically elected Chilean government led by Salvador Allende was overthrown on 11 September 1973. This gave rise to a military dictatorship from September 11, 1973 to March 11, 1990, headed by General Augusto Pinochet. The regime was characterized by systematic suppression of political parties and the persecution of dissidents in a manner unprecedented in Chilean history. About 3,000 people were reported dead or missing, thousands imprisoned, and an estimated 200,000 Chileans went into exile. In 1980 the regime replaced the Chilean 1925 constitution with a military constitution. The new constitution contained several provisions that would eventually lead to the Chilean national plebiscite on October 5, 1988, where Chileans denied Pinochet a new mandate and voted for return to democracy in 1990. Patricio Aylwin won the presidential election. In a repeat of history, about 14 million eligible Chilean voters filed out to vote for 155-member constitutional convention on Saturday, May 15, to end the decades of military constitution.

In many ways the Chilean experience is similar to Nigeria’s. Since the return of democracy in 1999 Nigerians have been groaning under the weight of a military-imposed constitution with resultant inequality and choking marginalization. Yet, what we hear from some highly placed individuals are comments that are far from healing the nation, but are rather capable of exacerbating tension. The anti-restructuring comments credited to Kogi State Governor, Senate President and others are unbecoming. They exposed themselves as indifferent to the plights of Nigerians. For the Senate President to speak about secession and restructuring in the same breath is a clear indication that some leaders pretend not to understand the issues on the table well enough. Or, they are taken over by their prejudices.

READ ALSO: They should let us breathe

Restructuring is not synonymous with secession, and does not mean fighting the President. The leader of Afenifere, Chief Ayo Adebanjo, has some answers for the Senate President and others who try to negatively spin the narrative to mean that those clamouring for restructuring are indirectly or directly calling for secession, or fighting the President. Speaking during a meeting of the Afenifere on Friday, May 14, he said that those asking for restructuring are not secessionists. “The clamour for the return of the country to [true] federalism is borne out of the obnoxious provisions in the constitution which has made economic and political progress impossible, and this has been the main cause of instability in the country. Our resolve for the restructuring of the country back to [true] federalism is unshakeable. We assert we are no secessionists. It is those who oppose restructuring that are enemies of a united Nigeria. All opponents of restructuring give impetus to secessionists”. On his part, Senator Ifeanyi Okowa, Delta State Governor and Chairman of the Southern Governors Forum, said: “All the things that we discussed; nothing is against the unity of this country. We reaffirm that as a people, as elected governors, we believe in the unity of our country”. But something needs to be done to sustain the unity.

Whether we come from the North or South, anyone who loves Nigeria and wishes the country to continue as one united entity would be honest with himself on these critical issues. With love for Nigeria, it would be unhealthy to politick with these issues and claim that the President has already restructured Nigeria through Order 10 which gave autonomy to local governments, legislature and judiciary. The President’s Order 10, as good as it may be, is not the same as restructuring the country. We cannot replace constitutional provisions with executive orders. Restructuring is a structural rearrangement provided for in the constitution. It cannot happen by executive orders.

With wide spread marginalization, we can least afford to play the ostrich. With unprecedented insurgency in the North and agitations in the South, our leaders should not push converts to the insurgents or bandits by their actions and utterances. “The conversations are obviously needed because if we do not talk and we allow the voices of our people to continue to speak, and the leadership shies away, then we are giving room for further crisis”, said Governor Okowa.

Nigeria is better united on the basis of justice, fairness, equity and peace. The tokenism of granting autonomy to local governments and the judiciary by executive orders cannot pass for restructuring. In the current dilemma, restructuring becomes the most attractive solution. Leaders should be seen to be taking proactive steps towards the resolution of the issues and not leaning to unnecessary political grandstanding.

The Immoral Underpinnings of the West