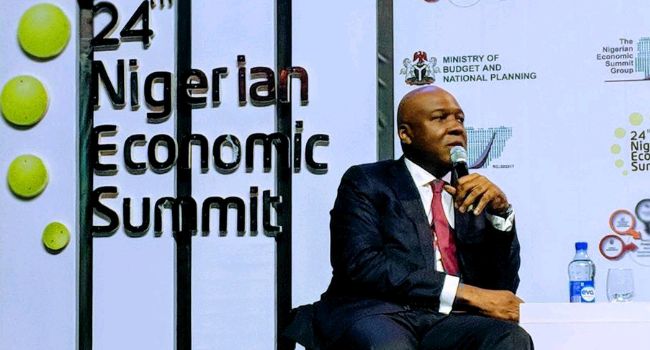 The President of the Nigerian Senate, Bukola Saraki has lamented the refusal of President Muhammadu Buhari to sign the Petroleum Industry Governance Bill, PIGB despite its importance to the nation’s economy.

Saraki, who disclosed that the legislature will exact more pressure on the executive to have the bill signed into law, also called for transparency and credibility in the war against corruption in the country.

The Senate President spoke at a dinner as part of activities at the ongoing 24th Nigerian Economic Summit in Abuja on Monday night.

Speaking on the PIGB, Saraki said the resolve by the legislature to mount pressure to ensure the bill gets presidential assent has become necessary given its importance to development of the oil and gas sector in Nigeria, noting that it was unfortunate that the bill had not been assented to.

“We took it as a responsibility to drive that bill to a level it has never been in a decade’’.

“That bill, a lot of people when we started said we cannot do it, but we demonstrated we have the political will and the commitment to do it.

“We passed the governance bill and it went to the executive.

“What I expected considering the kind of work that was done was for us both arms to seat down, because the issues that were raised are not issues that are not surmountable.

“Unfortunately, after so many months, the bill has come back with query that can easily be trashed out in a day session.

“Those in the petroleum sector will agree with me that they have never seen the engagement we saw in the governance bill.

“Secondly, we had the fiscal bill and we have taken it to the point that has never been archived, but I believe a lot of the operators will want to ask what will happen to the fiscal bill if the governance bill was not assented to.

“Our intension is to go back to the executive and seat down with them in the interest of Nigeria.

“This is a very good bill as most operators and the technical people in the sector commended it.’’

Read also: Okogie disagrees with Buhari on role of clerics in politics

According to Saraki, the observations made on the bill was not enough reasons to stop its assent because of the huge positive impact it would make in investments in the sector.

“Because as you know, there is no serious investment going in the oil and gas sector because people are not sure of what to expect.’’

“For example, the main area where we produce our major revenue is mainly in the oil and gas sector.

“But when you look at corruption cases, I am not sure you will find many of the cases in that sector, the fight is so selective. “But if it is transparent, you should start from where you are producing your large source of revenue.

“Because if you can tackle corruption in the sector, there will be less leakages down the line.

“For example today, we are back to spending close to 3.6 billion dollars petroleum subsidy, so apart from the national assembly, which anti-corruption agency is looking at that?

“The point I am making is that there should be a transparent process and approach in fighting corruption.

“If we can make the petroleum sector most efficient which accounts for large revenue, government will be more efficient”, he said.