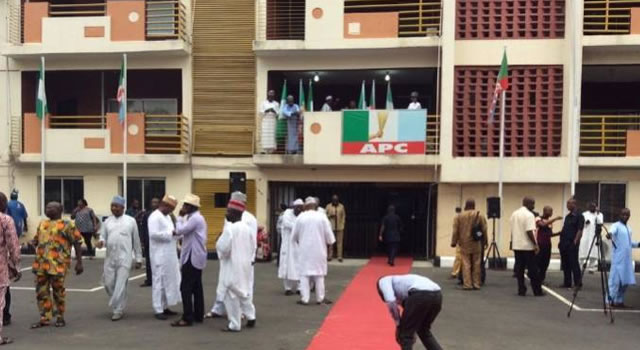 The ruling All Progressives Congress (APC) on Monday called on members of its National Working Committee (NWC) and the secretariat workers to return to their duty posts.

The call came after five days of sealing of the party’s national secretariat by men of the Nigeria Police Force on the order of the Inspector General of Police and the operatives of the Department of State Services (DSS) in the aftermath of the leadership crisis rocking the party.

The party, in a statement issued by its National Publicity Secretary, Lanre Issa-Onilu, also denied that the NWC was factionalised, adding that disagreement was not out of place in a political party.

The statement reads in part: “The National Working Committee (NWC) of the All Progressives Congress (APC) has not been factionalised or in the nature of crisis being repeatedly reported in a section of the media.

“In a political organisation such as the APC, contestations are not unusual and are not necessarily intractable. The issues being alluded to in the media reports are matters before the courts and should be allowed to run their normal and legal course. The exaggerated story foreboding Armageddon is far-fetched.

“We call on members of the National Working Committee (NWC) and the party’s secretariat staff to resume at their offices and continue carrying out their scheduled roles and responsibilities without any fear.

“We thank the Inspector-General of Police (IGP), Mohammed Abubakar Adamu, personnel of the Police, Department of State Services and other Security Services for their professionalism in the process of maintaining the peace and preventing hoodlums from fomenting trouble at the APC National Secretariat.

“We assure all our members in Nigeria and across the world that our leaders are capable of resolving any contestations that may arise bearing in mind the best interests of our great party and in the pursuit of progress and development of our country.”

The security at the party’s secretariat was relaxed on Monday with workers and reporters allowed access into the complex.