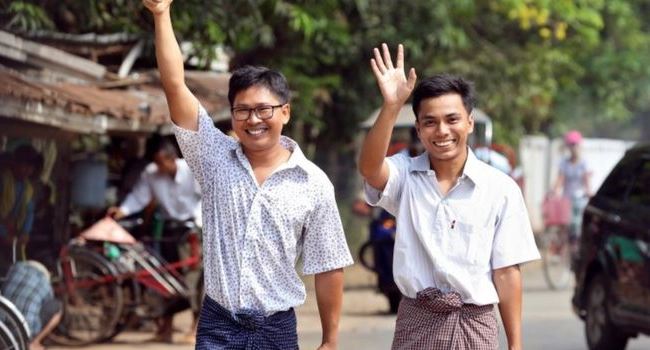 Two Reuters journalists imprisoned in Myanmar for their reporting of the ethnic cleansing of Rohingya Muslims have regained their freedom after spending more than 500 days in jail.

The two reporters, Wa Lone, 33, and Kyaw Soe Oo, 29, were convicted in September and sentenced to seven years in jail.

Aljazeera gathered that the case had triggered reactions from diplomats and advocates for human rights before the men were released on Tuesday as part of an amnesty of 6,520 prisoners by President Win Myint.

“I am a journalist and I am going to continue,” Wa Lone told a crowd of reporters outside the Insein prison in Yangon. “I can’t wait to go to my newsroom.”

“We are enormously pleased that Myanmar has released our courageous reporters,” Reuters editor-in-chief Stephen Adler said in a statement.

“Since their arrests 511 days ago, they have become symbols of the importance of press freedom around the world. We welcome their return” Adler added.

Related Topics:myanmarPresident Win Myint
Up Next