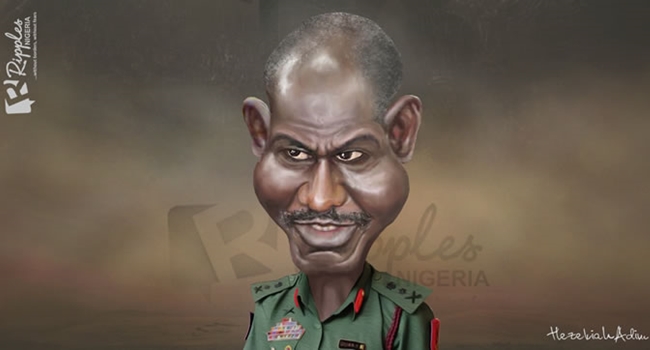 Nigeria is a country where people wake up to unexpected surprises. And, we did wake up to one a few days ago. It came from the Nigerian Army Chief, General Tukur Buratai. Remember him? You can’t possibly miss him in the crowd. He is the dark Army boss with subtle cheeks, often decked in military camouflage, and usually caught with a little frown on his face.

So, what is it about Buratai and surprises?

The unexpected surprise hitting Nigerians at the moment is a tweet from the verified Twitter handle of the Nigerian Army which reads: “A book titled The Legend of Buratai will be officially presented to school children on May 4th, 2019 at the FCT Library, Abuja.”

The content of the book is chiefly about the exploits of the Nigerian Army over the insurgency and insurrections in Nigeria under the leadership of the Chief of Army Staff, LT. General Tukur Buratai, in a fictional style narrative of children’s literature, authored by a renowned scholar, Dr. Abubakar Mohd Sani.

According to Sani: “The Legend of Buratai is first and foremost a work of fiction that I hope will make primary and secondary school students to fully appreciate the life of General Buratai, one of the greatest infantry Generals to ever emerge in Africa. It’s a calculated attempt to transform his life into folklore for lovers of literature and school children. Readers will know how to prepare to become an officer, how Buratai worked smartly as a student, the history of Buratai and the BabuBura people, the disciplines of a General and so on.” The book will be presented to school children in Abuja, Lagos, Maiduguri, Kaduna and Yola.

You are shocked, at first, to learn of this.

Legend? In the same country where under the watch of General Buratai the Boko Haram insurgency has combined with banditry to entertain Nigerians with a festival of sorrow, tears and blood? Are we longer witnesses to how fellow citizens have been killed, maimed and sacked from their communities in different parts of the country? Bearing in mind these heart wrenching security minuses, one wonders the kind of legendary stories that would be told in the book about the Army Chief.

The timing of the book cannot be lost on any keen observer. It would appear that the writing of the book is a deliberate and strategic initiative to re-package a waning image and create a favourable tale which will be on the lips of Nigerians in years to come.

Two recent events make this argument plausible. Consider this. Only recently, two tertiary institutions within a space of one week named their institutes after Buratai. The sequence of events that would culminate in a book launch cannot but have been systematically thought through and engineered.

What manner of romance with Igbinedion and Ebonyi varsities?

Before the tweet on the presentation of the book on General Buratai was made public, the Vice Chancellor of Igbinedion University, Okada, Edo State, Prof. Lawrence Ezemonye, on April 15th, 2019, named their Centre for Contemporary Security Affairs after General Buratai. In the same vein, on April 19, 2019, news filtered in that the Vice Chancellor of Ebonyi State University (EBSU) and former Deputy Governor of Ebonyi State, Professor Chigozie Egbu, named its newly established Institute for Peace and Strategic Studies after General Buratai.

Now, the question. How come within the same period, a book on him was announced to be released and universities are busy naming their Institutes after him? These events send strong signals that these initiatives are syndicated and well-organised to immortalize him, most probably, as a war hero.

It is even more surprising that the Vice Chancellor of Ebonyi State University traveled with a team to Abuja to name their new Institute after him. The chase after Buratai is uncommon and there is the temptation to query the romance between the army and one of its most critical publics. Such image making gestures usually don’t come free. This, incidentally, raises questions on whether the Army Chief paid money to have these institutes named after him. If yes, how much did he pay? As a military officer, how much is he being paid to have enough to spare in order to immortalize himself?

Many posers, indeed. Could General Buratai have been under pressure to make himself acceptable to the public given the below-par performance of the military in their duty of protecting the territorial integrity of the country? Thus, is the rush to use his office as the Chief of Army Staff to get institutes named after him and a book written on him not a preemptive move to beat the opprobrium that may likely attend his exit as the Army Chief as President Buhari tinkers with his Next Level administration which will kick start on May 29, 2019?

A ‘legend’ and a bloodied nose

It would amount to self-betrayal, if General Buratai beats his chest and declares that his performance as an Army Chief since his appointment in 2015 has been something to cheer about. A plethora of security breaches of monumental proportions have occurred since he assumed office – security breaches that make his positioning as a legend laced in the corridors of doubts.

The book authored by Sani, perhaps, would provide answers to how the Army Chief viewed himself after the dastardly massacre, in one night, of hundreds of Shiite Muslims, in Zaria, Kaduna State, in December 2015, by soldiers. The massacred Shiites were reported to have been hastily buried in mass graves as revealed by the Secretary to Kaduna State Government, Balarabe Lawal, during a Public Hearing of the Judicial Commission of Inquiry into the killings.

More so, the story of how the outgoing governor of Borno State – the state of his origin – Alhaji Kashim Shettima, ran to President Buhari, early this year, with a high profile delegation and shed tears, appealing to the President to expedite effort in the fight against the Boko Haram terrorists who had captured the towns of Baga, Bunduran, Kukawa, Doron-Baga and Kross Kawwa in Kukawa Local Government Area of Borno State should not be missing in the book.

And, wouldn’t Nigerians feel fulfilled if Sani included the massacre of hundreds of the Indigenous People of Biafra (IPOB) members by the Nigerian Army, in May 2016, at a church in Onitsha? This is not forgetting the woes of many communities that have received the deadly attack of the killer herdsmen. With these sorry, pathetic tales can the Army General be counted as a legend?

But for a reticent President, many argue that General Buratai would have long been sacked based on the record of his palpable flaws – flaws that even played out in the role of the military in the last elections.

The ‘legend’ who sees no transgressions

The 2019 general elections may have come and gone but the role of the military, particularly, the Army left a sour taste. Under the watch of Buratai the army lost its reputation as a neutral institution in the conduct of elections. Common place were allegations that Buratai’s men openly engaged in rigging of elections, killing of civilians and molestation of staff of the Independent National Electoral Commission (INEC) in various States of the federation.

Rivers State is an obvious example of how General Buratai’s men made a mess of the electoral process. The military were alleged to have undermined the credibility and sanctity of the governorship election in the state – where they were reported to have invaded the INEC’s collation centre; chasing away election monitors, accredited political party agents and news men – a development confirmed by Mr Edwin Enabo, INEC Head of voter Education and Information in Rivers State.

In all these, General Buratai was quoted to have said: “it is wrong to say the electoral process was militarized.” May be, General Buratai is unaware that legends are not known to endorse undemocratic actions.

A web of corruption scandals

The Army Chief is not bereft of corruption scandals. It could be recalled that in 2016, Buratai was immersed in asset declaration scandal after evidence emerged that he owned two choice properties in Dubai, United Arab Emirates– assets he claimed were bought with personal savings.

In some quarters, it is believed that General Buratai acquired the money he used to buy the property when he was the Director of Public Procurement at the DHQ between 2012 and May 2015. Eye-brows were, however, raised when President Buhari left General Buratai in the probe of Army Chiefs (past and present) who are connected with the arms scandal involving the former National Security Adviser, Sambo Dasuki.

The book, ‘Legend of Buratai’ would seem a desperate act to launder a dwindling image. It, also, lays bare a calculated attempt to hoodwink impressionable children into believing what may not have been. To argue that the book is more of a brain-washing initiative may not be too far from the mark.

The book rings of twisted heroic deeds. It should border the critical mind that children, being highly impressionistic, would not ask questions on the veracity of the contents of the book.

The Legend of Buratai is only a well-packaged myth.

Fight against corruption will be frontal in the next 4-yrs, Lai Mohammed declares