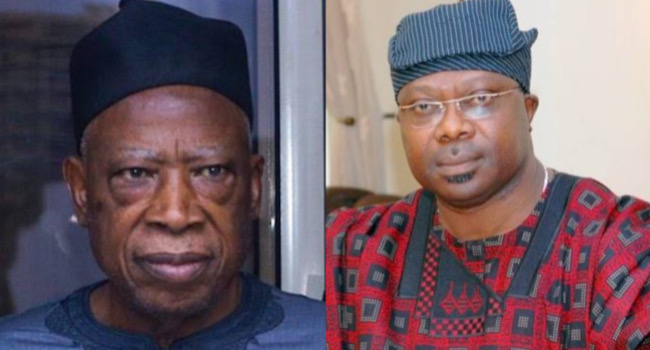 The long anticipated National Convention of the ruling All Progressives Congress (APC) which held at the Eagle Square, Abuja on Saturday, threw up interesting perspectives with the emergence of former Nasarawa State Governor, Abdullahi Adamu and ex-Osun State Deputy Governor, Iyiola Omisore, respectively as new executive members of the party.

While Adamu emerged the Chairman of the National Working Committee (NWC) Omisore was picked as the national secretary of the party.

The duo, alongside other elected officials will be saddled with the task of guiding the party into the next general elections in 2023, as well as heal the cracks within the party as a result of lingering crisis brought upon it by the immediate past Caretaker Committee led by Yobe State Governor, Mai Mala Buni.

However, the party leadership, President Muhammadu Buhari who pulled out every stop to see that Adamu emerge the party’s Chairman, as well as members and Nigerians in general, are expectant as Adamu and his team gets down to work in the coming days.

It is worthy of note, that both men who will now be the face of the ruling party going into the next general elections, were once prominent members of the opposition Peoples Democratic Party (PDP) under which they both held sway at their respective government houses.

Adamu emerged after a long-drawn battle riddled with negotiations and withdrawals. His emergence was further reinforced by the withdrawal of six aspirants also contesting the coveted position.

Senator George Akume who was among the aspirants made the decision by his colleagues known in a letter addressed to the chairman caretaker committee of the party, Governor Mai Mala Buni of Yobe state, on Friday.

Adamu was also backed by President Muhammadu Buhari in a brazen show of favouritism which left other candidates floundering.

Buhari, in his speech, enjoined incoming MWC members of APC to promote internal democracy and respect for party members.

During a press briefing some weeks ago, Adamu disclosed how his emergence as a frontrunner for the position was due to pressure from respected stakeholders who believe he is the right man for the job.

If the ‘stakeholders’ knew of his background as a former PDP chieftain, or his battles with the Economic and Financial Crimes Commission is however unknown, as he takes control of a position known to be usually trailed with controversies.

However, the former Nasarawa governor is not a stranger to controversy, as they have previously trailed him.

In March 2010, the Economic and Financial Crimes Commission (EFCC) filed a 149-count charge against Adamu and 18 others, including former Nasarawa state officials and contractors, over allegations involving N15 billion fraud.

The former governor and his co-accused, however, filed a motion countering the charges on the grounds that since the funds alleged to be embezzled belonged to the state, the EFCC was out of line in its investigation. The defendants also pleaded not guilty to the charges.

Adamu also chaired the Northern Senators Forum (NSF) but was removed in 2018 for alleged “financial mismanagement and maladministration,” according to a letter from the Forum signed by its then spokesperson, Dino Melaye, and read on the floor of the upper chamber by the then Deputy Senate President, Ike Ekweremadu.

Shortly after the announcement, Shehu Sani (Kaduna-APC), who was a then member of the forum, alleged that Mr. Adamu and other executive members mismanaged about N70 million belonging to the group.

After making the unity list drafted by leaders and stakeholders of the APC in the South-West region, Omisore emerged the consensus candidate for the position of National Secretary. He is believed to have been annointed by Presidential aspirant and former governor of Lagos, Bola Tinubu.

Omisore has come a long way in Osun state politics, with a jinxed governorship aspiration since 1998. He served as deputy governor of the state under Chief Bisi Akande of the Alliance for Democracy (AD) from 1999 to 2002, when he was impeached, after falling out with his former principal.

Chief Akande who is a founding father of the APC, had demonized Omisore after the fallout, describing him with unprintable names. After his impeachment, Omisore was arrested and subjected to trial for alleged involvement in the murder of a former Attorney General of the federation, Chief Bola Ige, in December, 2001. The Ile-Ife strong man was still standing trial when he contested and won a senatorial seat under the PDP. He was thereafter acquitted.

After representing the Osun East Senatorial District from 2003 to 2011 under the PDP, Omisore rekindled his aspiration to govern Osun, but elections did not hold in the state in 2011, following an unexpected court ruling, which sacked former governor Olagunsoye Oyinlola from Office, and installed Rauf Aregbesola as governor. Omisore remained a PDP chieftain until 2018 when he defected to the Social Democratic Party to contest the governorship election again. He came third in the race, trailing Gboyega Oyetola of the APC, and PDP’s Ademola Adeleke.

There was however a stalemate in the election between PDP and APC, prompting the Independent National Electoral Commission (INEC) to announce a by-election between the two parties in seven polling units of four local government areas – Osogbo, Orolu, Ife North and Ife South. These areas were considered the stronghold of Omisore, which turned him into the beautiful bride, as leaders of both APC and PDP resolved to wooing Omisore as a result of the stalemate between Oyetola and the dancing Senator Adeleke.

The suitors from APC were able to win his support and Omisore delivered his strongholds to the ruling party in the September 28 rerun.

In February 2021, Omisore formally announced his defection to the APC, and has since been working for the party in Osun state. His new position as the national secretary of the APC is believed to be a compensation for his role in helping the party win Osun in the last election, and also prevent the PDP from winning the state in coming election.

How far both men will go in delivering on their respective assignments will be evident in the days to come, as they both carry their baggage forward with the APC into the election year. Both coming from the PDP which they dumped for the individual reasons and political survival no doubt, it is now their responsibility to determine if the APC will swim or sink in 2023.