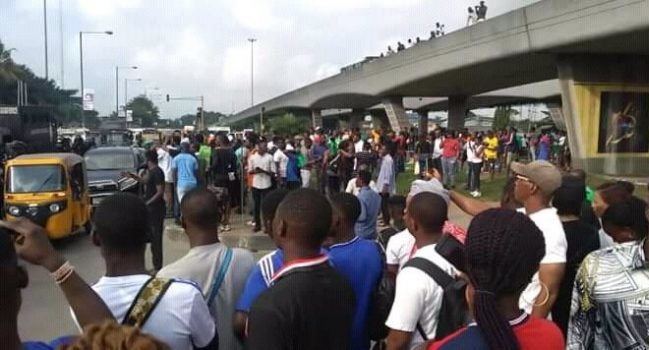 The Socio-Economic Rights And Accountability Project (SERAP) has reacted to the alleged arrest of a journalist and some ‘RevolutionNow’ protesters by Nigeria’s security operatives.

The organisation called on the President Muhammadu Buhari-led government to release the arrested persons immediately, vowing to initiate international legal action against the government should it fail its demand.

The group said in a post on its Twitter handle: “We’re concerned about the reported arbitrary arrest by police of some ‘RevolutionNow’ protesters and a journalist.

“Whoever approved this needs a remedial course in constitutional law.

“Sections 39 (1) and 40 of the 1999 Nigerian Constitution (as amended) is clear: Stopping people from peacefully exercising their freedom of expression and right to protest is unacceptable and illegal.

“The Nigerian authorities should immediately and unconditionally release all peaceful protesters. We’ll pursue international legal action if they’re not released.”

SERAP went further to say that Nigeria’s current situation should not be different from that of Hong Kong and Puerto Rico.

This is coming as a journalist and some members of the RevolutionNow protesters in Lagos and some other states of the federation were reportedly arrested on Monday by security operatives.

The police had warned the group against going ahead with the protest scheduled to start on Monday but the warning was ignored.