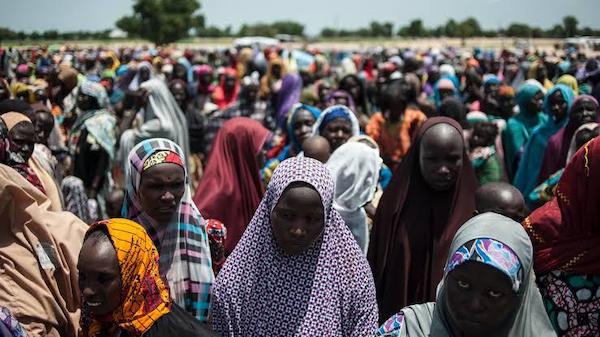 A rights group, Human Rights Watch, on Tuesday, called on the Borno State government to halt its recent move to shut down camps of Internally Displaced Persons (IDPs) in the state by December 31, saying the move would create more risks and hardships.

According to the group, the authorities should suspend the camp closures, saying the closure would not guarantee the displaced people’s rights.

It would be recalled that in August 2020, the Borno State government announced and began plans to resettle over 1.8 million displaced people from camps in Maiduguri, the state capital, to other communities across the state where the government said houses and other amenities had been constructed or renovated to accommodate them.

This was followed by another announcement in October 2021 that all displacement camps in Maiduguri will be shut down by December 31.

But in a statement made available to Ripples Nigeria by the group on Wednesday, a Nigerian researcher at Human Rights Watch, Anietie Ewang, said the resettlement and camp closures done so far have taken place without adequate notice or information and have left many people worse off.

She argued that it was unconscionable to uproot people who have already lost everything to the conflict without dignified and sustainable alternatives.

Ewang noted that the rights and well-being of displaced people and refugees should be the paramount consideration as the authorities navigate the northeast conflict and its impact.

According to the statement, Bitrus Mshelai, a technical adviser to the state government’s Ministry of Reconstruction, Rehabilitation and Resettlement, which is leading the efforts to relocate people and shut down the camps, told Human Rights Watch that the authorities made the decision because of the poor conditions in which people lived and the need for people to go back to their communities and farms to rebuild the state’s economy.

He also said many of the camps are in facilities such as housing estates and schools that the government now needs for post-insurgency activities.

He disclosed that the displaced people had various options, including to stay behind in Maiduguri, to return to their ancestral communities, or to move to places where the government had built or rebuilt houses.

However, the statement noted that people interviewed by the group said under the right conditions they want to return to their normal lives in their home communities due to the poor conditions in the displacement camps, but the group found that the authorities’ process for returning the IDPs didn’t give them adequate time, information, or options to make informed decisions.

The statement read, “People said that various versions of information about the government’s plans filtered through the displacement camps from informal sources.

“Two people who were moved from Dalori Camp 2 in Maiduguri to Kauwuri in Konduga Local Government Area in September 2020 said they first heard of the government’s plans to resettle them in their home communities on the radio in August 2020. The news was later confirmed by their community leaders in the displacement camp, but they had no further details.

“There was no consultation or discussion to prepare them for the move or to tell them about available alternatives. They were returned abruptly to Kauwuri on September 10, 2020, a few days after they were told that that the government would take them there.

“Similarly, when the authorities took steps to shut down Bakassi camp in November 2021, they did not consult with displaced people. Three people said that Government officials came into the camps on November 19 at about 3 a.m. to announce that the camps would be closed by the end of November and to hand out tokens that were later exchanged for one-time payments.

“A community leader in Bakassi camp, which held about 40,000 people, said that they were given 11 days to leave, until November 30. The International Organization for Migration reported that more than 4,000 people went to other camps or camp-like settings in Gwoza and Mongunu Local Government Areas. But the other 90 per cent remain unaccounted for.”

The Boko Haram conflict, now in its twelfth year, has displaced over 2.9 million people in Nigeria’s northeast and hundreds of thousands to neighbouring countries.