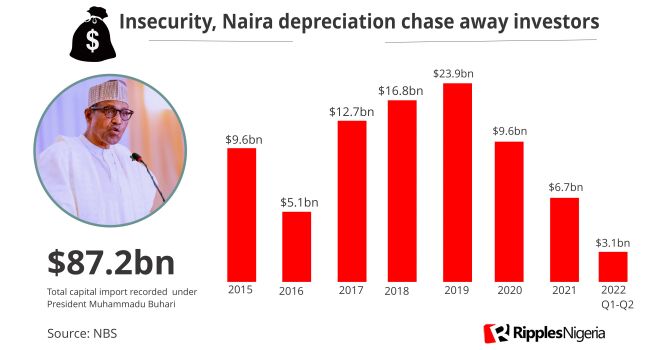 Investors have continued to pass up opportunities to invest in the Nigerian economy, putting their personal safety and investment security first.

Investors hold the view that political stability in the host country is important in considering their choice of investment locations and deciding the amount and
volume of investment in that country.

According to the latest capital importation report released by the National Bureau of Statistics, Nigeria in the first six months of 2022 attracted capital inflows of $3.1 billion.

In the first quarter, $1.5 billion came into the country and N1.53bn in the second quarter. Here is a summary of what the data show.

The report’s main takeaway is how unappealing states become to investors on an annual basis.

The number of states reporting capital inflows has consistently declined over the last four years.

For example, no fewer than 20 states reported capital inflows in the first six months of 2019.

According to the most recent report, only Anambra, Ekiti, Katsina, Kogi, Lagos, Oyo, and Plateau have something to show. The remaining 31 states were entirely avoided.

In fact, no investment has been recorded in six states in four years: Gombe, Jigawa, Kebbi, Taraba, Yobe, and Zamfara.

NBS in its report showed that the most of the capital inflows came into the country from the United Kingdom, especially in the second quarter of 2022 with a value of US$781.05 million.

A sectorial analysis of the capital importation showed the agricultural sector was seriously avoided no thanks to the issues of bandits, Boko Haram and conflicts between herdsmen and farmers.

Meanwhile, the banking sector recorded the highest inflow of US$646.36 million amounting to 42.10% of total capital imported in the second quarter of 2022.

Hot money, as it is called, is frequently transferred among financial institutions in an attempt to maximise interest or capital gain and could easily be pulled out by the investor depending on his/her perception of the business environment.

Specifically, hot money investments are targeted at bonds and money market instruments. They are major part of foreign investments inflow, which also exerts pressure on the Naira and national reserves every time the investor’s perception of the economy is negative. The move leads to capital flight.

Breakdown of the second quarter investment type showed that the largest amount of capital importation was received through Portfolio Investment which accounted for 49.33% (US$757.32 million)

Foreign Direct Investment (FDI) plays a major role in the economic develop-
ment of emerging markets. This is important, because FDI provides capital to
finance domestic projects as well as expertise to undertake such projects.

Without investors, people are becoming jittery about the Nigerian economy despite its huge potential.

Two major concerns for investors are the stability of Naira, and the level of insecurity across the country.

It is therefore important for Nigerian government to find a quick solution, because foreign investors provide capital to finance domestic projects as well as expertise to undertake such projects.